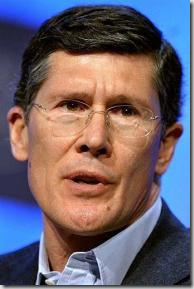 Because he is. A greedy, selfish dick.

Times, they're hard for a lot of people these days. A lot of people are losing things, jobs, homes, insurance, health care, retirements, livelihoods.

Take the 200 workers who lost their jobs when Republic Windows and Doors in Chicago shut down without warning. Republic closed it's doors for a simple reason, they just weren't making enough profit to stay in business. Republic has been around for decades, and some of the workers who lost their jobs had been there for many of those same years. They make a decent product and they haven't changed much. So how come they suddenly aren't profitable? I bet you can guess the answer. People do buy a single window unit or pre-hung door frame to replace an older failed unit in their homes, but most are sold in bulk to contractors building new houses or renovating old ones - and that's where the profit is. Except the housing market went bust here a couple of months ago right after the mortgage industry collapsed. Followed by the banking industry. Followed by economic recession (and look how we can just use the word "recession" now without having to beat around the Bush [yes, pun intended], that'll tell you how bad it actually is, and just how bad it might become). Oddly enough, people aren't buying a hell of a lot of houses these days. Which means that contractors aren't building a hell of a lot of houses these days. And nobody can afford to renovate. Which, in turn, takes us back to Republic Windows and Doors, who aren't selling a lot of windows and doors to contractors these days.

Which, of course, means no profit.

Because Republic was suddenly no longer profitable, their creditor, Bank of America, cut off the company's line of credit. And that was the end of the road for Republic. They closed their own doors and windows, and in violation of the contract with their employees didn't give 60 days notice or severance pay. The former employees occupied the factory and demanded satisfaction. Satisfaction in accordance with the contract. Satisfaction, not jobs, because, well, those jobs are gone off to Iowa where the cost of doing business is cheaper and the morals of company executives aren't closely scrutinized.

What does all this have to do with John Thain?

John Thain is the Chairman and CEO of what used to be Wall Street power house, Merrill Lynch. He's been there about a year now - and he wants a bonus, ten million dollars worth of bonus to be precise. $10,000,000. This is over and above his actual $750,000 salary, restricted stock valued at $28 million last year (less now, but still), and a three-tier grant of 1.8 million stock options worth $20 million last year (less now, but damn). When he was hired last year he was called "Wall Street's richest mop-up man" by the NY Times. The $10,000,000 is a bonus. A bonus for what, you ask? Well, let's review, shall we? During Mr. Thain's tenure as the head of Merrill Lynch the company has gone belly up. The firm suffered billions in losses this year, billions, nobody is exactly sure how many billions. Those losses left the company teetering on the verge of collapse. Note, I said teetering. Did John Thain save Merrill Lynch perhaps? Did he pull the company back from the edge? Thus earning himself a tidy bonus from thankful stockholders? Well, no, not exactly. Unless you charitably say taking ten billion dollars in Federal bailout money and still ending up having to sell Merrill Lynch to Bank of America for a bargain basement price of $50 billion is saving the company. When Thain took over Merrill Lynch last year, the company's stock was trading above $50 a share. Today? Well, today it's about $14 and change, and that's actually up 12 percent following the Bank of America buyout announcement.

Despite his abject failure, John Thain felt he deserved a bonus. He originally tried for $30 million, but he was eventually willing to settle for ten.

Did you catch the tie-in?

Yeah, it's Bank of America. Republic's creditor and new owner of Merril Lynch and recipient of $25 billion themselves in federal bailout funds.

See, it could be argued that BoA cutting off Republic's line of credit was just prudent banking practice - you don't risk your stock holder's money on loans to a company that isn't making a profit. Right? Except, it wasn't BoA's money. The $25 billion in Federal bailout funds was given to BoA specifically to finance loans and lines of credit in order to keep businesses afloat until the economy recovers.

Now, let's follow the logic here. BoA wouldn't take a risk on Republic, a couple of million dollars risk since you asked, but is willing to shell out that $25 billion in free taxpayer money, plus another $25 billion of their own, to acquire Merrill Lynch outright. Merrill Lynch, which if you want to make comparisons, has suffered a business failure of astounding proportions through mismanagement and stupidity and greed, compared to Republic - who's setbacks are not, largely, the result of their own failures but rather the directly result of companies like Merrill Lynch and jerkoff's like John Thain.

Yesterday morning, Thain finally stood in front of his board and requested that he not, after all, get a bonus. This, I suspect, is less a sudden fit of conscience, and more a sudden realization of reality and a desperate attempt to deflect widespread scorn, criticism, Congressional attention and inquiry, and to keep his job -or better yet get another one.

Fine. Take Thain's bonus, and the bonuses of every other greedy, self-serving executive on Wall Street, and use it to fund lines of credit for companies like Republic, or at the very least pay the workers what they contracted for. I'm not talking about some communist Robin Hood fantasy of taking money from executives and giving it to the poor - I'm talking about not giving bonuses for poor stewardship and I'm talking about paying people in accordance with what they specifically contracted for and have the full legal right to expect. Nothing more.

This bailout is on our backs, ours, the taxpayers. That means we get to set the terms. And if we have to pay a bailout, then nobody in that industry should be seeing a bonus. That money was intended specifically to save people like those standing outside the Republic plant in Chicago, not so BoA could acquire their competitors and hand out big fat checks to people who already have more money than they know what to do with.

Why Thain and not Bank of America? Jerkoff of the week, I mean. Because while BoA's actions aren't exactly admirable, especially when it comes to what they did with that $25 billion, they at least are doing what they see as good business. John Thain and people just like him are the ones who largely brought this mess down upon the world. John Thain and people just like him will never find themselves without means, without homes, without jobs, without insurance, without healthcare. John Thain and people like him will never find themselves huddled in the cold outside a defunct Chicago factory. John Thain is doing absolutely nothing but trying to get his and screw everybody else. Everybody. You. Me. Those people outside of Republic Door and Window in the cold. The employees of Merrill Lynch. The stock holders. The people who lost their homes, pensions, retirement funds, and everything else when companies like Merrill Lynch imploded due to mismanagement and greed. Everybody. Only one thing matters to John Thain, and that's John Thain.

He, and greedy self-serving, self-centered, selfish sons of bitches just like him are precisely what caused this mess in the first place.

But those 200 workers out on the street sure as hell do.