Things That Chap My Ass About Presidents Day 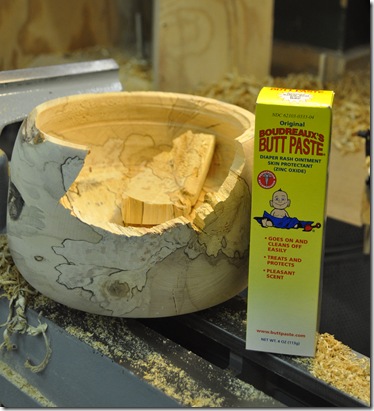 Apparently for my chapped ass.

First, my computer is running glacially slow.  It’s because Microsoft wants to install updates on my machine and I won’t let it.  After a couple of days of being denied, the update process begins stealing clock cycles in an effort to force you to reboot by slowing your machine down to a crawl. THIS PISSES ME OFF. Fuck you, Microsoft, I’ll reboot my computer when I’m damned good and ready and until then you can jam your updates right up your collective colons.  In fact, if you keep pestering me, I will never reboot. Because I’m like that.  I just killed the update process via the task manager and you know what? I’m not going to do the updates for another week, maybe two. Suck on that, Bill.

Second, as you might have noticed, I blew up that beautiful spalted birch bowl this morning in the shop.  I was trying a technique advocated by a “professional” wood turner. You know what?  Screw him. I’ll continue to do it my way, thanks.  My way doesn’t blow up bowls.

Third, it’s raining.  In February. In Alaska. It’s 37 degrees out and raining.  Walking from the shop to the house is worth your life.  I just know I’m going to slip and land on my bad shoulder.  This is making my ass more chapped than usual – if that’s possible.

Fourth, the idiot motorhead who lives at the bottom of the hill behind me has the day off too.  You know what that means, despite the fact that the snow is melting off because it’s raining, it’s snowmobile tune up day! Rev rev rev rev REV FUCKING REV! All goddamned day long.  I swear to God, if he doesn’t stop soon I’m going to get out my old 1000 watt tube amp and start blasting ABBA down the hill – and don’t think I won’t.  I’ve got a set of powered bullhorn speakers used for public announcing at outdoor venues, hooked up to the amp they’ll peel flesh off bone, and turn the remaining bones to jelly, at a thousand yards – with Dancing Queen blasting through them, they’ll induce mass suicide for a two mile radius, and frankly, I don’t really like my neighbors very much anyway.

Fifth, Presidents Day.  Is this a stupid holiday or what?

We should call it what it is, Federal Employee Paid Day Off Day or maybe Excuse For A Sale At Wal-Mart Day or Just Another Reason To Close the Post Office Day.

Presidents Day.  How stupid. What are the Presidents Day traditions?  Do we deep fry a turkey? Put up colored lights? Paint eggs? Shoot guns into the air and light off firecrackers? Nail some guy to a cross?  Burn witches?  Is there corned beef involved? What? I’m a little vague on what this day is supposed to be about.  Originally, we celebrated George Washington’s birthday.  I guess I can dig that.  George was the father of the United States, he threw a silver dollar across the Mississippi, wrestled a polar bear when he was only three wearing nothing but a coonskin cap, and fought off the Nazi’s after they bombed Pearl Harbor – or something.  OK, I’m not sure exactly what George did, but he’s Sarah Palin’s hero and that’s good enough for me.

But that wasn’t good enough for everybody else, oh no.

Pretty soon, people wanted the day off for their favorite President too.

So then we had Abraham Lincoln’s Birthday. That was fun, people dressed up in stovepipe hats and went to see a play…

But pretty soon people were talking about taking the day off for Thomas Jefferson’s Birthday. And then there was Benjamin Franklin’s birthday - he was never the President, but he’s on the money and that confused a lot of people and besides he discovered electricity and that ought to be worth a couple days of drinking and tailgating and some kind of bowl game.  Pretty soon folks were talking about taking Grover Cleveland’s wedding anniversary off and going up to Big Bear for a four day weekend.

Then somebody came up with the idea of Vice President’s day, and Speaker of the House Day, and Take Your Press Secretary To Lunch Day, and Spend A Night In The Motel 6 With Your Congressional Page Day.

By the end of the 1960’s, things were just totally out of hand – there were so many holidays that the 60’s seemed like one long party. That’s where hippies came from, it wasn’t a cultural revolution, it’s just that everybody had been basically drunk for a decade (which also explains the hygiene issues).

The problem with “Presidents Day” is that it is supposed to be a day we all take off and ruminate on the greatness of our leaders here in the US.  And sure, that sounds terrific in principle, but in reality there were some real duds in the ol’ Presidential line up. 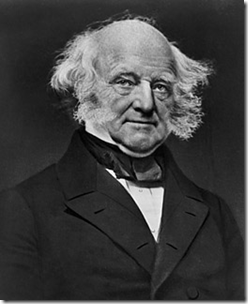 Give this guy a red rubber nose and we’re talking Bozo the Clown here.  And that’s how a lot of people felt about him.  In the 1830’s there was basically no federal banking regulation and so banks just did whatever they pleased – including handing out huge loans to people who couldn’t pay them back, ever.  A massive financial crisis resulted.  Marty was a rich elitest and liked to live the highlife, you can imagine what the average voter thought of him by the end of his first term.  Fortunately, thanks to the Fed nothing like that can happen these days.

Or how about John Tyler: 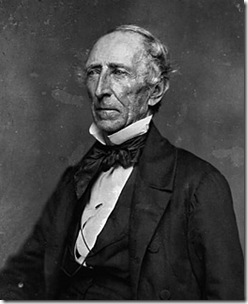 Tyler ended up in the White House by default.  President William Henry Harrison gave the longest inaugural speech in history – in the pouring rain, in freezing temperatures, without a coat or a hat – and as a result had the shortest presidency of all time when he died from pneumonia less than a month later.   Tyler, who was Vice President, was sworn in as Harrison’s replacement.  Tyler was so widely hated that he is often confused for George W. Bush by historians.  His entire cabinet resigned in protest of his policies. The House tried to impeach him and he was voted off the island by his own party.  After he was unceremoniously evicted from the Oval Office, he joined the Confederacy and died during the Civil War as a Representative of the CSA House.  Personally, I think the guy missed his calling, he could have made a killing as the “before” picture for any number of laxative manufacturers.

Do we really want to celebrate James Buchanan? 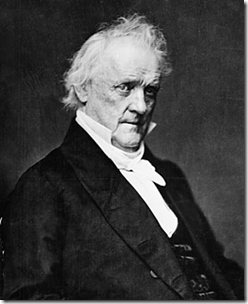 It’s creepy uncle Fester! This guy basically caused the Civil War. Be sure to raise a couple of brewskies in his memory, won’t you? 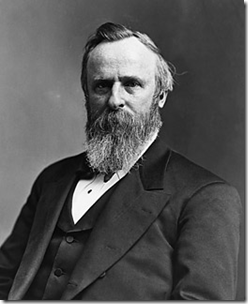 The only President with a more sissified first name than Millard Fillmore (seriously, Millard? Were his parents just trying to get him beat up every single day of his life?). This guy lost the popular vote, but won the Presidency in court – thank God that kind of shit doesn’t go on any more.  His inauguration was actually held in secret, for fear that he’d be assassinated if he appeared in public for his swearing in.  His wife as known as Lemonade Lucy because she banned alcohol from the White House – funny, but you’d think she’d drink pretty much continuously if she had to sleep with this guy. C’mon, Lucy, give The Beard some sugar! 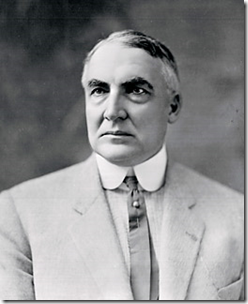 Widely regarded as “The Lost Munster,” Harding is considered by most American historians as probably the only US president who can’t look at George W. Bush and say, “Well, at least I didn’t suck as much as that guy.” He was easily corrupted, an adulterer, a horrible leader, a worse public speaker, and the cause behind the Teapot Dome scandal. He died in office and the only reason anybody noticed was because shit started getting better.

How about this guy? 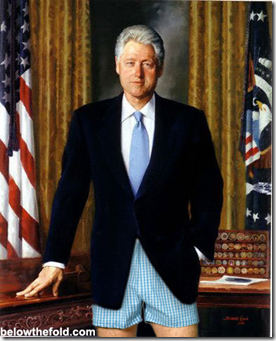 Actually, I’m sort of in favor of celebrating William Jefferson Clinton on Presidents Day – with a beer and a cigar and by (wink) not having sex with that woman.

And finally, how about this pudknocker? 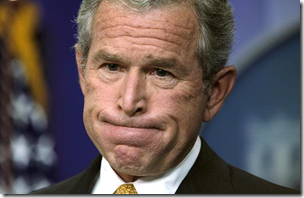 If you call it Presidents Day, then you have to celebrate all of the presidents.

Looks like I’m going to need a bigger tube of that butt paste.

Go on, name the guy you think was the least worthy to be honored on Presidents Day.

Hope yours is better than mine.