It's Now Safe To Turn Off Your Computer

I mentioned this computer the other day.

The ancient Gateway 2000 tower I’ve had sitting in my basement for years now.

That’s right, seventeen years ago. I have a seventeen year old Gateway 2000. Seventeen years is prehistoric for a computer. Hell, seventeen years is longer than the earth has been around according to some Creationists, who claim that this computer isn’t really that old but only appears that way because Noah used it on the Ark to play Solitaire while he waited for the deluge to recede. Whole nations have risen and fallen and new worlds have been discovered around distant stars in the seventeen years since this machine booted up for the first time. Today, it’s like an archaeopteryx, some primitive hairy-feathered flightless bird from the Jurassic epoch, its bones prized from the soft stone beneath my house, given flesh again by teams of scientists, and set on display for small children to marvel at in fearful fascination, or as my son put it last night, “What’s this piece of crap doing in the middle of the floor?”

Why do I still have it? (Aside from its obvious intrinsic historical value, I mean)

Well, for a number of reasons, I guess. It was the first major purchase my wife and I made after we were married. It cost a hell of a lot of money back then. I’m reluctant to throw away technology (Somewhere in the back of my mind I have this nightmare vision of a ravaged Earth, humanity hunted and driven to the brink of extinction by terrifying alien robot invaders who have come from burnt out stars and destroyed our technology, crushed our armies, brushed aside our nuclear weapons, but their one weakness has been discovered and the government led by a post-Betty Ford Rehab Clinic former child actor turned radio shock jock who was then swept into the White House on a wave of popular support and became a beloved redheaded president has a plan – all they need an old 486/33 running DR-DOS and an 8-track streaming tape backup unit, a couple of SCSI II cables, and 75 baud acoustic modem. The fate of the world hangs in the balance, government agents knock on my door and demand access to my storeroom for the sake of humanity – and there I stand, “Oh, soooo sorry MIB Dudes, I just threw that shit out last week. Total bummer guys. I’m really sorry.” See? I’d feel pretty damned stupid for letting humanity down like that).

Plus it was a really great machine when I bought it.

In those days you got a copy of Byte or Computer Shopper and Gateway 2000 had these big multi-page color glossy adds right in the middle of the magazine. They listed a spread of machines with differing capabilities, usually sitting in a cow pasture surrounded by Holsteins. Then you called Gateway 2000 at their barn-like factory in Sioux City, South Dakota and ordered your machine. Customer service was uniformly excellent, knowledgeable, polite, friendly, and helpful. They walked you through the ordering process and the creation of your machine. Two weeks later, custom built, it arrived via UPS at your doorstep in a couple of black and white spotted boxes like a pair of enormous cubical cows.

I loved Gateway 2000 machines. They were just plain excellent. Massive, robust, built in America by Midwest cow farmers from the finest grains and greenest alfalfa sprouts and able to stem the tide of alien invasions – in 8-bit EGA color and tinny 4-bit sound.

The computer itself aged gracefully. Originally it came with an Intel 80486 processor clocked at 33MHz. 8 Megs of RAM and a 120Meg harddrive rounded out the package. It came with MS-DOS 3.21. I slicked the drive and installed Digital Research’s DR-DOS version 5, Word Perfect, and Borland’s Turbo Basic and Turbo Pascal. The machine did not come with a mouse. Mice were something those sissy Apple guys with the long hair and hygiene issues used. It went through many upgrades, eventually ending up as it is now with a AMD GreenTree Pentium 1 clone designed to run on a 486 Motherboard (after hardwired chipset upgrades – no such thing as flash firmware in the Jurassic), 16Megs of RAM, 8 parallel ports, 4 serial, 2 SCSI 1 and 2 SCSI II ports, an internal modem, a huge 4 gig drive, two 1x CDROMs, 8-bit VGA graphics and sound card running Windows 98b – and a Microsoft serial ball mouse. Hell the power supply alone could probably drive a fully loaded Greyhound bus at 14.4kbps down the information super highway.

Eventually, it just couldn’t be upgraded anymore and we went looking for a new machine. By then Gateway 2000 was just Gateway. The company itself had gone through a series of upgrades, and then the Dot Com bust, and had emerged much worse for wear. They’d moved from the Midwest to Silicon Valley – and quadrupled their operating and manufacturing costs. Gone was the great customer service, farmed out to overseas service centers. Gone too was the outstanding quality of their products, the manufacturing of which had also moved overseas using cheap labor and cheaper components. Gateway machines were far, far inferior to the original Gateway 2000’s. Like Sears and their Craftsman line of tools, Gateway declined steadily in quality, service, and innovation until they were a mere shell of their former glory. They tired to reboot several times using various methods, nothing worked. The company was finally bought out by Acer in 2007 and no longer exists for all practical purposes.

As I’ve noted elsewhere, my storeroom (one of several actually) has steadily accumulated various carcasses of deceased computers over the years. The basement was filled with piles of antiquated and burned out technology that were mostly just taking up space. Now, we have a lot of room and a lot of storage space and it wasn’t really an issue. But a while back I decided to overhaul the attached garage, removing shelves and various other things in order to make room for the big emergency generator and its associated electrical transfer panel. A lot of things got moved to the basement. That’s when I realized that I have a lot of junk. And that’s when I realized it was time for some spring cleaning and a trip or two to the dump. Over the past week I’ve pulled out and stripped a half dozen computers, removing anything useful and anything that shouldn’t go in the landfill, like circuit cards – those will go to recycling. I’m boxing up the parts I’m keeping and I’m pretty proud of my self, what once filled an entire storeroom now fits in two small boxes. And the storerooms are clean, organized, and empty.

The very last piece of junk to be stripped is the Gateway 2000.

I went to pull it apart yesterday and then I wondered – does it still work?

It’s been at least eight, maybe nine, years since the last time I plugged it in. Hmmmm. I rooted around and came up with the keyboard and mouse (the keyboard is the old GW2000 Anykey Keyboard, still the best damned keyboard ever made – but it’s a DIN connector type, remember those?). The monster 19-inch Gateway 2000 CRT that came with the machine has long since died so I plugged in a small flatscreen and fired that sucker up.

It powered up, then bitched at me about the internal CMOS battery being dead. Really? I typed in the date, time, and fooled around until I remembered how to load the harddrive specifications. Then told it to boot the operating system.

Ninety seconds later it was fully up. 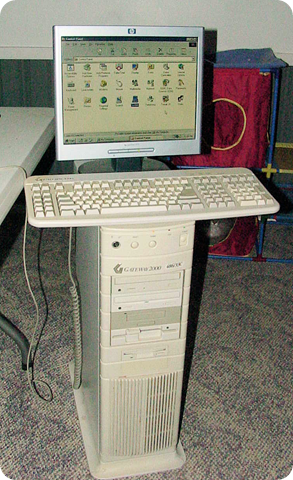 Amazing, seventeen years old, eight or nine years sitting in a dusty storeroom, full of dirt and dusty bunnies and who knows what else and it still runs like a top.

I briefly thought about seeing if I could get it to run Vista, but hey why spoil the moment, eh?

I also thought about hooking it into the phone lines, it still has the old CompuServe access numbers and BBS software and I wondered if I plugged it in would it connect me to 1995? I thought maybe I could send my younger self an email from the future - don't vote for Bush, Jim, also remember your wife's birthday is on the 15th, every year, and your keys are between the sofa cushions. Oh, and Blu-Ray wins out, don't buy that HD-DVD, Doofus - remember how that whole BetaMax thing worked out. Then I thought it probably wasn't a good idea to screw around with the space time continuum like that - plus I couldn't find a phone jack.

I let it run for a couple of hours, just to see if the ancient power supply would eventually smoke. But it hummed right along, steady and sounding like a gas turbine on an 747. Hell, even the fans purred along like they were made yesterday.

Eventually my wife complained that the machine was probably sucking up enough power to induce nuclear fusion with nothing really to show for it. I got the hint and powered the beast down for the last time.

Today it will get stripped and the chassis taken to the dump along with the rest of the storeroom debris and the last remnants of a once pioneering company will be gone forever.

It’s OK though, if the aliens do invade we can still execute the President’s plan using 486/33 emulation on our iMacs…