As you might guess, I’m not a big Hip Hop fan.

I also feel the same way about Country and Western, so you know, don’t go getting all offended on me.

But, every once in a while, I hear some Hip Hop that throws me for a loop and makes me realize that it isn’t actually just noise, at least not all of it, and that some Hip Hop artists are exactly that, artists.

Take Emmanuel Jal. Born in the village of Tonj in southern Sudan just as the civil war broke out. His father disappeared into the rebel SPLA and his mother was killed by government soldiers. Seven year-old Jal fled towards Ethiopia, along with thousands of other orphaned children hoping to find refuge and education.

Instead he was taken by the SPLA and turned into a child soldier.

He fought for seven years, and was exposed to almost indescribable horror. Eventually he escaped with a handful of other soldiers, and they ended up in Waat. There Jal met a Emma McCune, a British aid worker who smuggled him into Kenya and into recovery and school. McCune died in a car accident several months later, but her friends helped Jal finish his education and recover from the horror of his childhood.

Instead of rage and bitterness and a thirst for revenge, Emmanuel Jal became a voice for peace and forgiveness and works through the fans of his music to overcome ethnic and religious divisions and heal the divides in the youth of the Sudan.

Though relatively unknown here the US, he has become a huge hit in the Sudan, Kenya, and across Africa. He joined some of Britain’s best know musicians on Help: A Day In The Life in order to bring aid to children in the conflict zone. And he performed with an all-star line up at Nelson Mandela’s 90th Birthday concert in London’s Hyde Park – an amazing journey for a orphaned child of war in the Sudan.

What brought Jal to my attention was the movie Blood Diamond. My wife and I watched Blood Diamond again the other night and I’d forgotten just what an incredible and moving and horrifying picture it is. Jennifer Connelly I can take or leave, but Leonardo DiCaprio and Djimon Hounsou are both gifted actors. DiCaprio’s Danny Archer is a testament to his ability (truly, if you don’t believe DiCaprio can actually act watch Blood Diamond and then The Aviator, and see if you still think the same thing. The man is truly talented). And the same is true of Hounsou’s passionate portrayal of Solomom Vandy.

The music of the movie, primarily the theme music by James Newton Howard is incredibly powerful and literally makes the movie. But what caught my attention was the African Hip Hop song Baai (Dutch South African, Afrikaans, for “Bay”) by Emmanuel Jal. The song is a mixture of Arabic, English, Kiswahili, Dinka, and Nuer – the languages of the Sudan – and performed by Jal and Abdel Gadir Salim, a Sudanese folk singer.

Whatever the language, the message remains the same: Peace. 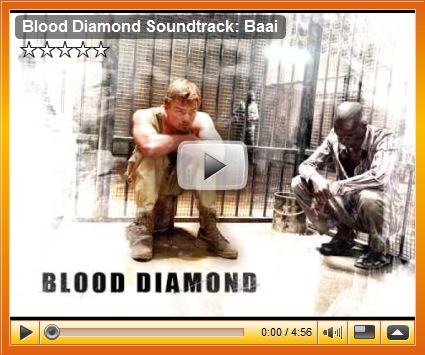