Oh, yeah, I remember that duty.

It's called a "Crackpac," and it's just about the last thing a Navy crew wants to do. It's miserable duty. It's hotter than hell itself down there in the south eastern Pacific, I can think of no more miserable place for an Alaskan like me - even Iraq wasn't as bad, climate wise that is. There were days where you'd get burned if you put your hand on the metal skin of the ship. The hull and superstructure would heat up to unbelievable temperatures during the day, and radiate heat into the ship all night, you slept covered in sweat - when you could sleep. Navy ships are cooled inside by chilled water systems that were designed for the northern latitudes (because we designed our ships to fight the Soviet Navy in the North Atlantic, duh), and the air conditioners don't work worth a crap in the hot waters off South America. For the same reason, the flash evaporators on older ships like mine and the Simpson don't work very well in warm water, so there's limited fresh water for showers, and what there is feels like warm piss. The humidity is almost always at a 100%, and you never feel clean, ever. Hell, I used to sweat in the shower.

The liberty in South America can be decent depending on where you are, but usually it's lousy, dirt, poverty, mosquitos and malaria pills. There's no fleet support. This means that instead of fueling at sea, we have to pull into port and fuel from tanker trucks - in some cases taking over a hundred tankers and up to twenty-four hours of backbreaking labor in sweltering heat.

Then there's the mission, hunting shithead drug runners on the high seas. It's dangerous, miserable, tedious, and frustrating. For every smuggler you catch, a hundred more get through to Mexico and California and it doesn't take you long to figure out that the war on drugs is a long lost cause. You can't stop cocaine smuggling by hunting down smugglers, or burning coca fields, or giving money to a hopelessly ineffective and corrupt Columbian government, or by making speeches, or by appointing a totally powerless sock puppet of a drug Czar. As long as there is a demand, there'll be a supply. Period. You see the utter, abject poverty of the Ecuadorian and Columbian peasants. You see the incredible, unbelievable amounts of money flowing south from gold bling wearing Los Angeles and New York and Bumfuck Indiana and you know there is an endless supply of desperate, hungry people willing to risk their lives on the open sea in order to get a piece of it. You see the hopelessly mired clusterfuck that is the American counter narcotics mission with the DEA, FBI, ICE, Coast Guard, Navy, Air Force, Customs, and a dozen other agencies all scrabbling for their piece of the glory, their moment in the sun on the War on Drugs, their little bit of the money. Nobody is in charge. There's no cooperation between agencies. There's no plan, but everybody has a secret agenda. There's nothing but back stabbing incompetence and corruption and rice bowl bullshit. And it becomes apparent fairly quickly, often before you leave homeport, that the agency you work for in South America, Joint Interagency Task Force South (JIATF South), is about as useful as a carbuncle on Dick Cheney's big white ass. JIATF South is where incompetent, back stabbing, glory hound officers go to die - or get rich and retire. The place is rotten from bottom to top, and side to side, but hell, it's duty in Key West, out of sight and out of mind.

Still, every time you make a bust you feel pretty dammed good about it. You might chase a go-fast smuggling boat for hours, pounding through the seas at flank speed until they run out of fuel, or crash, or just give up. Some times they shoot at you, and you get to blow them out of the water in a cloud of vaporized blow. Sometimes they throw the cocaine and heroin bales over the side of their boat in a desperate attempt to escape. Then you've got to go into the water after it, carefully because the concentration of cocaine HCL is so high that if you get any on your skin it'll stop your heart nearly instantly. And no matter how hopeless the War on Drugs is, at least those bales won't end up on the streets of America somewhere. 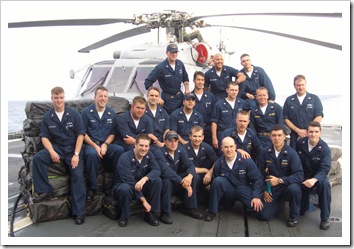 USS Simpson came home with 16 tons, most taken from a submarine smuggling vessel. Sixteen tons of cocaine, if you're having trouble visualizing what several billion dollars worth of drugs looks like, here's a picture of me and my intelligence team sitting on about ten tons. This picture was taken off the coast of the Galapagos Islands on June 1st, 2004 on the flight deck of USS Valley Forge. Those big black cubes we're sitting on are literally worth billions when cut with powered baby formula or dried milk or rat poison or boiled in gasoline to make crack. That's me, third from the right, second row - the guy with the radio mic on my right collar.

Altogether we brought home nearly twenty tons of coke and 40 something prisoners. Did it make a difference? Well, we'd like to think so, but somehow I doubt it.