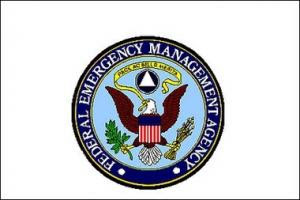 [Deputy Administrator Johnson steps up to a cardboard podium mockup. 'FEMA' has been hastily sketched out in magic marker on the front]

FEMA Deputy Administrator Harvey Johnson: Allrightee then, let’s get this show on the road. First question.

: Well Chertoff's still a fatass, but I've dropped ten pounds, thanks for noticing.

Janitor Girl: Well, you're looking good, Admiral, and I'm not just saying that because I clean your office and you sign my paychecks. I think you're like totally hot.

Bob from Accounting: Admiral, Bob Smith here, from the uh, er, Accounting Department News Agency. I'm a real reporter and I'm like totally not lying about that. [Sign Language Translator makes the sign for 'retard']

: Well, of course you're a real reporter, Bob, and this is a real FEMA News Conference and there really were Weapons of Mass Destruction. Wink wink and so forth and so on. Did you have a question for me, Bob? You should, I wrote it down for you, it's on that yellow sticky note in your hand. [Sign Language Translator makes the sign for 'Help! I'm trapped in a Chinese fortune cookie factory!']

: Other side, Bob. Oh, and I'll need that back when we're done here. [Sign Language Translator puts her tongue in her cheek and pumps it back and forth]

Bob from Accounting: Oh yeah, sorry. [flips note over] OK, my question is 'Are you hippy with FEMA's response so far?' [Sign Language Translator makes the sign for 'WTF?']

Bob from Accounting: Well, this whole deal doesn't make any sense, Admiral. And your handwriting sucks. [squints at the sticky note] Uh, let me rephrase that; are you happy with FEMA's response so far?

: Am I happy with the response? Hell yeah, I'm happy. I make like a bizillion dollars a year and I don't live in , and I've got like totally hot janitors hitting on me, what's not to be happy about? [winks at Janitor Girl] [Sign Language Translator makes the sign for ‘Asshole']

Bob from Accounting: Yeah, but there’s like a million people homeless and the whole damn state south of LA looks like Dresden after the firestorm. [Sign Language Translator pulls out a cigarette lighter and inches unnoticed towards Johnson, the crowd of ‘reporters' becomes suddenly more alert]

: Whoa there, Sparky, slow down! Let’s not go gettin' carried away. I think you’re forgetting who decides who gets promoted around here. Next question [Johnson points at a guy in a UPS Deliveryman uniform]

UPS Guy: Sorry, Dude, we're not supposed to talk to the customers. I'm just here to deliver this package. Can somebody sign for this?

UPS Guy: Uh, can somebody sign for this quickly, please.

Harvey: Come on, Man, just ask me a question. Whoa, is it getting hot in here, or is it just the janitor? [Sign Language Translator belatedly makes the 'rimshot' sign again]

UPS Guy: Anybody else smell smoke? [puts down package and leaves, Sign Language Translator and Bob from Accounting follow him. Janitor Girl looks around for a fire extinguisher, but there are only cardboard props]

Harvey: Anybody smell smoke? Is that supposed to be a joke? I can't believe you would make jokes at a time like this. Are you totally insensitive to what's going on in Cahleeforniah? FEMA is in there pitching, and we've come a long way since Katrina. FEMA is making real progress. Goddamnit it's hot in here!

Janitor Girl: [still trying to help out] What progress have you made, Admiral?

Harvey: That's more like it. Nobody has drowned this time around, have they? No flooding. No collapsed dikes. I'd call that progress. HOLY SHIT, I'm on fire! [dances around, slapping at the flames, the cardboard podium catches on fire]

Janitor Girl: Um, I've got to go, there's a plugged up toilet in the Lady's Room.

Harvey: Bitch! How about a little help here?

Janitor Girl: Don't worry, I hear Bush and Chertoff are flying in. I'm sure they'll help. Gotta go now. [she runs out the door]

Harvey: [facing camera, his head fully engulfed in flame] Well, good night and thanks for coming. Remember FEMA is on top of the situation and you can count on us!