Of course the best part about Thanksgiving is the leftovers.

You know, now that I think of it, it doesn’t take me long to get sick and tired of turkey leftovers.

Which is why this year we didn’t do a whole turkey. There’s just three of us and we weren’t having anybody over, so instead of a whole bird we just did a turkey roast. No no no, not a turkey “loaf,” gah, a roast. A turkey roast is basically a whole breast and some darkmeat - say about half a good sized bird - deboned. You cook it the same way as you do a whole bird, it takes about three hours.

I always make the dressing, as opposed to stuffing, in a separate roasting pan. I make my dressing with ground hot sausage and I want to make sure that it’s cooked all the way to 160F. If it’s inside the bird, the outside of the Turkey is usually dried out jerky by the time the middle is done, and the stuffing tends to absorb the juices and turn soggy if it’s inside the bird. So, I make dressing in a separate dish, and fill the inside of the turkey with a mirepoix of aromatic vegetables - celery, onion, carrots – and garlic, sage, and butter.

In this case, since we were doing a roast, I packed the mirepoix and spices around the outside of the meat and covered the whole thing in foil. It worked like a charm and the resulting juices, mixed with cream, flour, parsley, spices, and white wine, make the best turkey gravy ever.

The roast came out excellent and gave us just enough turkey leftovers for two or three days.

It seems some folks just don’t know how to make a good sandwich.

Allow me to enlighten you.

Open the sandwich and spread the inside with a bit of leftover cranberry sauce (you make yours from scratch, right?) mixed with an equal amount of cream cheese. Add fresh spinach leaves or a good dark lettuce such as romaine (no Iceberg, ever). Little salt and pepper. 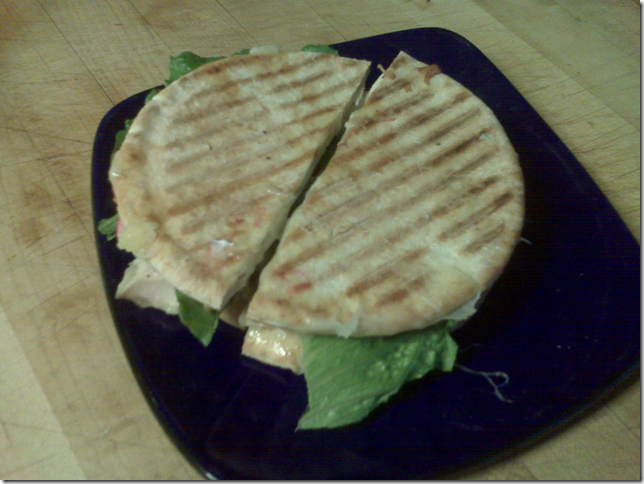 Leftover dressing on the side is optional.

2lbs hot ground sausage – Jimmy Dean will do in a pinch, better yet find a local artisan butcher shop that makes their own. The better the sausage, the better the dressing.

3 cups chopped celery and onion, sweated in olive oil or butter with 2 tablespoons fresh ground garlic until softened, and then allowed to cool.

Sage, rosemary, thyme, basil, and cracked black pepper to taste - or rather to smell, I add spices until it smells right to me. But if you need numbers, say 1 tablespoon of the sage, rosemary, and thyme, 1 pinch of basil and black pepper.

Mix it all together in a large mixing bowl. Make sure to break up the sausage into small pieces. It should be loose, not packed together, we’re not making sausage balls here.

Place loosely in a large covered and greased casserole dish and bake at 350F for an hour and a half or until the middle reaches 160F on an instant read thermometer. Remove from heat. Now if you like the crunchy browned stuffing from along the edges, serve as is. Otherwise, stir inner to outer, and fluff with a large fork, cover and allow to sit for twenty minutes.

Mix it all together in a medium sized saucepan, bring to a boil, boil for twenty minutes. Mix with a fork, breaking up the berries. Remove from heat, transfer to a glass dish and allow to cool, then refrigerate until cold.

We spent the rest of the day putting up our Christmas tree. You remember the Christmas tree, right? This year I bought a new ladder, one of those huge articulated Warner jobbers, that made setting up the tree a whole hell of a lot easier.

Yesterday it snowed. Nearly a foot here at Stonekettle Station and I spent most of the day dealing with that and a dead truck battery.

Today, my wife and son have gone off Christmas shopping, leaving me home to finish up a home improvement project by myself (damn right, leaving me home – no way in hell am I venturing out this weekend thankwewveddymuch, I rather do drywall or light my hair on fire).

So, what are you guys doing with your long weekend?