Just Another Monday Night in Alaska

I had a couple of posts I intended to put up last night.

Instead I spent the entire evening in the shop.

It wasn’t entirely my fault, see there were several tons of meat between me and the computer.

I had stepped outside to see if the sky was clear. There was supposed to be a meteor shower. I was standing in the drive, in the pitch dark, staring up into the sky waiting for my eyes to adjust when I realized that I was not alone.

I could hear breathing.

The heavy breathing became what could only be described as snorting. Either there was a large animal directly behind me, or Rush Limbaugh was sucking down a hogie in my bushes.

Either way, this was not a good thing.

I turned around slowly…and suddenly found myself, literally, face to face with a large bull moose. About three feet away.

He was standing in the bushes directly between the house and the shop. In the pitch dark he was damned near invisible, unless you were about, say, three feet away. If you don’t understand how I could walk up on a half ton animal without noticing, you don’t live in Alaska or understand anything about moose – the bastards can turn invisible when they want to.

Here’s the really good part – it’s rut. And the object of his desire was a very large cow moose…who happened to be across the drive against the trees about fifty feet away. And I was standing directly in between them.

But wait, as they say on those TV commercials, there’s more.

The cow had two large yearling calves with her. They were about twenty feet away, near the front of the attached garage. Fortunately, they were small, only about 800 pounds or so.

I was surrounded by a herd of moose.

Remember that scene in Never Cry Wolf, where Charles Martin Smith is running naked amongst the caribou? Yeah, like that, only I wasn’t naked (considering that it was about –15F, that was probably a good thing). I took off for the shop, before Bullwinkle could decide in his dim little brain that I was some kind of impediment to his hookup and stomp my ass into the driveway gravel. I spent the next few hours in the shop like a college kid waiting in the hall for his roommate to finish up with that girl he met at the bar. The noises from the driveway were, uh, enthusiastic.

I found something to occupy my time: 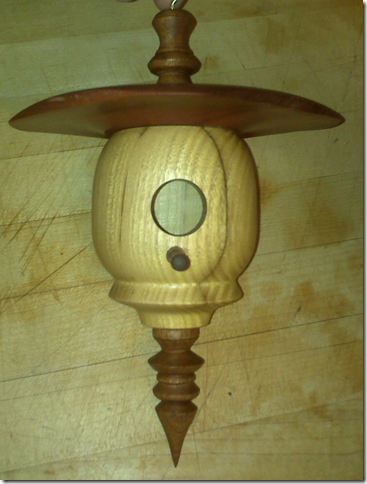 I made this while I was out there waiting for Bullwinkle and his squeeze to finish up. The birdhouse is black locust and rosewood. It’s quit large.

I also turned two bowls to rough and cleaned and oiled the lathes.

So, you know, it wasn’t a total loss.

Email ThisBlogThis!Share to TwitterShare to FacebookShare to Pinterest
Labels: Things I do in the shop, Things in Alaska