Boy, nothing says traditional American values like the Tea Party, does it?

That’s why, when I think of the "c" word, the Tea Party is the very first thing that comes to mind.

Conservatives. Why? What were you thinking?

Never mind. See, these folks call themselves conservatives because they believe they are conserving America’s heritage. Liberty and justice and such like are scarce natural resources, there’s only so much democracy to go around – if we give it to everybody there won’t be enough for real Americans (you know, real Americans, wink wink. You know). That’s why they call it inalienable.  If American rights were intended for everybody the Founding Fathers would have called them Alien Rights. But they didn’t, did they?

The Tea Party wants to shake the American Etch-a-sketch, erasing the last two hundred years of  history, and return us to a simpler time when men were men, priests were not lifetime members of NAMBLA, school teachers were celibate, every American was a patriot, Latinos were amusing sidekicks, Asians did the laundry, women kept their mouths firmly shut (except when they didn’t, boom chika bow bow), children were free labor, midget hurling was an Olympic sport, and black people were livestock.

Just like God and George Washington intended (Yes, midget hurling is in the bible. And GW loved a good dwarf toss. It’s true, you can look it up).

Those were the good old days of real America and, oh, how we miss them and long for that simpler, more patriotic world.

Hell, did I say 200 years? Conservatives would, if they could, roll the clock back to biblical times when man and dinosaur frolicked together (in a strictly platonic frolicking Christian sense, of course) - that’s why their candidates look like Grog, from those Geico Caveman commercials: 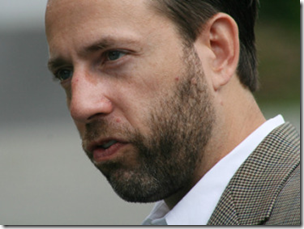 America, so easy a Conservative can do it!

We can’t go back in time, of course – because gay atheist scientists are too busy evolving the stem cells of aborted baby fetuses instead of doing something useful like inventing a time machine so we can rescue Jesus – but thanks to the Tea Party, we don’t have to travel in time.

We can bring the past to us.

Here are some of those traditional old fashioned American values:

If It Ain’t White, It Ain’t Right!

Once the Tea Party takes back America, honor will not only be restored, but the economy will recover instantly because white people will no longer have to waste precious brain power trying to tell ethnic minorities apart. "I think that you're misinterpreting those commercials," Tea Party Candidate, Sharron Angle explained to a group of Latino students, after being asked point blank why all her TV commercials (you know, the ones that end in “I’m Sharron Angle and I approve this message”) talk about terrorism and the exploding threat of illegal immigration and show unsavory brown skinned Spanish speaking people doing unsavory brown skinned Spanish speaking things. "I'm not sure that those are Latinos in that commercial. What it is, is a fence, and there are people coming across that fence. I don't know that all of you are Latino. Some of you look a little more Asian to me.”

I mean, honest to God people, who the hell can keep track of all those lesser races anyway? If they’re not white, they just look all the same – don’t get all pissy with me, you know it’s true. As Sharron Angle pointed out, even Latinos can’t tell Latinos from Asians, how the hell is a real American supposed to? 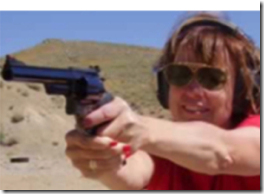 Back to Canunkistan, you filthy Asian bastards!

Angle then clinched the Canadian Latino Chinese vote by telling a funny story about how she was "the first Asian legislator in the Nevada Assembly."  She used her fingers to make her eyes look squinty and pretended to be a African American Asian Jew ordering a taco in Ebonics accented pig-Latin from an Arab. Ethnic people love that shit.

Those filthy socialist Canadians let terrorists into the United States. Hell, they’ve got a whole chunk of their commie population that speaks French for Christ’s sake.  As Sharron Angle pointed out, the real terrorist threat lies to the North!  And it’s not just the terrorism, those filthy flannel clad Canadian-baconbacks have been stealing our jobs for years! 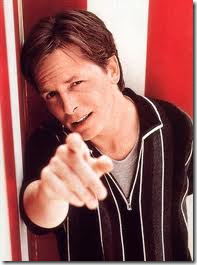 Try to imagine how many of us could be employed in the recording and acting business if it wasn’t for these goddamned metric system loving socialist bastards coming down here to steal our jobs. Hollywood is practically owned by illegal Canadians!

Communism is wrong, except when it is oh so very Right!

Fortunately, when it comes to securing the boarder, Alaskan Tea Party Animal, Joe Miller, has an idea: Let’s turn America into, wait for it, waaaaaaaait for it, East Germany! Because, folks, nothing says good old Constitutional American freedom like a great big fucking wall, some machine gun nests, a mine field, and about 2000 miles of barbed wire. Now, predictably, some sissy tofu-eating liberals took exception to the Patriotic Wall of Freedom idea, pointing out that the East Germans were trying to keep other East Germans from getting the fuck out of East Germany.  While that is true in a broad sense, it was an accident. Turns out the East Germans put the wall in backwards, because they were stupid commies.  Yep.  Joe Miller recognized this right away. See, he used to be Lieutenant in the Army and was trained in the use of Claymore mines.  It’s not enough to label a mine “front” and “back,” Joe knows you actually have to put a big damned sign on the front saying “this side towards enemy” otherwise Lieutenants tend to blow themselves up.  Same thing here. As long as we label one side of the wall “Point Towards Brown People (and Canadians)” we should be OK.  Liberals again tried to shoot down Joe’s American Shield Wall of Patriotic American Liberty by saying that it would add about seventy-five bazillion trillion dollars to the deficit – but  Arizona Governor Jan Brewer silenced that argument by pointing out that we could build the whole thing, including paint and landscaping, for less than fifty bucks if we just hired a couple illegal day laborers. 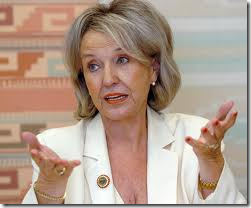 Equal Rights means not exercising yours!

Speaking of Latinos, what about the ones that are here legally? Hell, you know some of those people consider themselves Americans? Can you imagine? Now it’s true that we need someone to make the tacos and clean out Jan Brewer’s gutters, but to let them think they’re as good as real Americans? The Founding Fathers wouldn’t have put up with that nonsense.  That’s why the Tea Party-Naked Ministry of Propaganda put out a Spanish language ad on Nevada TV urging Latinos "Don't vote this November." 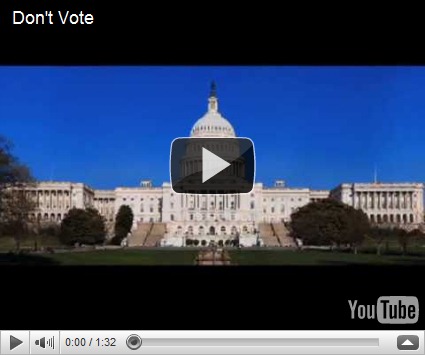 How do you say “Uncle Tom” in Spanish again?

Talk to the Hand!

The Constitution clearly says that if you ask a candidate a question he doesn’t want to answer, you’re clinically “irrational.”  Under Sharia Tea Party Law, large unidentified men in black suits then have the right to slam you into a wall and handcuff you.  Only a freedom hating liberal commie socialist fascist would try to point out that those large unidentified men in black suits were actually active duty US Army soldiers.  God Bless America.  Federal troops interfering with the electoral process on state and city property? Booyah! That’s the kind of East German power to the people and state’s rights Thomas Jefferson was talking about, right there. Joe Miller was stationed in Germany, he knows freedom when he sees it. 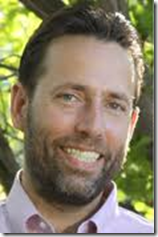 Besides, the Constitution clearly says that when a Tea Party Anointed invokes state’s rights, it’s time to just nod and move on. 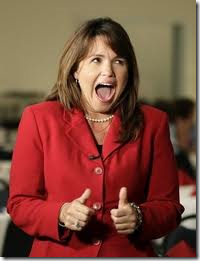 I have invoked states rights,

therefore your argument is invalid!

It’s the American way, folks. All great political movements hate somebody. Hitler had the Jews. Mussolini had, well, the Jews. Stalin, more Jews. Ahmadinejad? You guessed it, the Micronesians. What? I’m kidding, of course it’s the Jews!  Unfortunately, Jew hating has been done to death (er, sorry).  Conservatives need something else. I know, how about Gays? Yah! They’re liberals anyway, and beside they fight like girls! It’s important though, not to take Conservative comments “out of context.”  Remember, we don’t hate gays for ourselves, but rather we hate gays for the children. For the children, people. 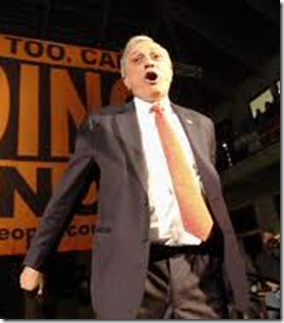 The Tea Party, there’s really no crazy so crazy that you can’t find a bunch of crazy following it.

Because it's important to keep hate and pessimism alive at all costs.