The angled light rays illuminated the Chugach range in blinding white, and with the leaves now off the trees I could see the Knik Glacier from my back porch. 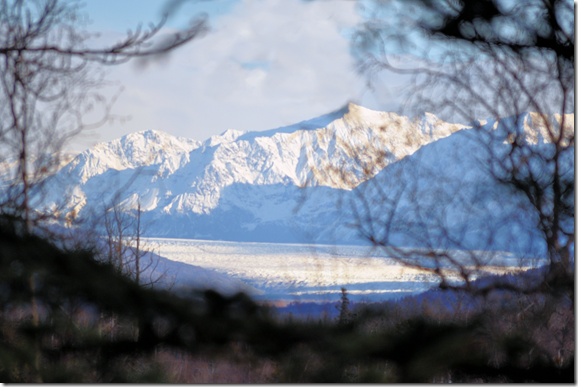 I don’t know about you, but it looks damned cold to me.

A couple weeks back a bunch of folks were stranded up there on the glacier when their sightseeing plane crashed. All survived the crash, but they were stranded near the center of the glacier with no way off the ice. A National Guard snow rescue team skied 20 hours through whiteout conditions to reach the crash site, bringing food and survival equipment.  A day later, the Alaska Air National Guard sent in a helicopter to pull everybody out. Unfortunately, due to the conditions on the ice, the rescue helicopter also crashed, again no one was badly hurt. But the second crash left both the erstwhile rescuers and the original victims stranded for a couple of days until the winds and storm conditions abated enough for another rescue attempt.

During the event, the foliage was too dense for us to see anything from here, even with the telescope.

Eventually all were safely rescued.