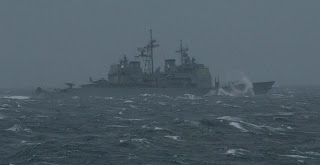 USS Valley Forge at sea in the Arabian Gulf

I dropped my wife off at the Anchorage International Airport last night, she's off on a business trip for the next week. Argh! I don't sleep well when she's not here, but, hey, what can you do, right? For twenty years, she waited at home alone for months, while I was deployed in the field or at sea, so I shouldn't complain (not that I won't, mind you). The one advantage of her being gone is that I can watch Modern Marvels and the Military Channel at night without hearing complaints (What? Another special on WWII?).

So this morning I came downstairs and flipped on the TV like I usually do, to watch the news while the kid gets ready for school, and it was still on the Military Channel from last night. And what were they showing? Operation Iraqi Freedom (yeah, yeah, there's an operational title that will haunt us for years). The special contained about five minutes of Infra-red video from the Mina Al Bakr Oil Terminal take down (a massive Iraqi off-shore oil loading terminal). In fact, the video was labeled "VFG FLIR" (USS Valley Forge, Forward Looking Infra-Red). I took that video. I and my team designed, procured, and installed a high resolution video capture system on Valley Forge when everybody in San Diego told us that it couldn't be done, and wasn't necessary in the first place. In fact, we ended up with two systems for less than the original cost estimate for one. We ended up using the information collected from that system on a daily basis, and six years later a small bit of it is on TV. And it looks good.

I had a hand in the oil terminal missions. Most of what I did I can't talk about, but as Valley Forge's Intelligence Officer, my team and I did most of the scouting missions and intelligence work for the off-shore oil platform missions in the months leading up to the war. Some of it was under pretty hairy conditions. But that intelligence was spot on the money, the SEALs took down that platform without a shot being fired or a life lost on either side. There are dammed few other missions that went as smoothly. Despite how this war is turning out now, I'm still more than a little proud of my part in that operation.

The picture is my last ship, the Aegis Guided Missile Cruiser, USS Valley Forge, CG-50, in heavy seas in the Northern Arabian Gulf. I took the picture from one of the ship's RHIB's (rigid hull, inflatable boat) returning from a scouting mission, about three days before the start of the war. I loved that ship, I miss her. Valley Forge is gone now, decommissioned and sunk as a target off Hawaii, because of a bunch of short sighted fools in the Pentagon.

You can click on the picture for a much larger image.
Posted by Jim Wright at 10:17 AM

Email ThisBlogThis!Share to TwitterShare to FacebookShare to Pinterest
Labels: Things that tickle me