Argh! The SciFi Channel is running a Dead Like Me marathon today. Damn damn and damn. I've got a whole list of things to do today, I'm not supposed to be sitting around in my sweats watching this weird quirky little show. But, I love everything about Dead Like Me, from the theme song (and the grim reaper opening) to the each of the complex, quirky characters, to the intelligent story arcs and clever writing. I especially love the way the characters began to develop in the 2nd Season. I love the strange quirky soundtrack, especially Boom Boom Ba by Metisse. I can't even begin to express how much it irritates me that the show was canceled after only two seasons and I'm never going to know the answers to its mysteries, i.e. how did Rube die, why does Daisy have that sad little smile, and who exactly is Crystal? Argh! After I become Ultimate Emperor of the Universe I'm going to make it a law that all canceled shows must end with a really great wrap-up movie, a la Firefly and Serenity. Dammit! I just bought the HD version of Heroes yesterday, can't justify the purchase of both seasons of Dead Like Me for a couple of weeks. Argh!

(Update! Surfing around IMDB, I just discovered that the SciFi Channel is doing a Dead Like Me 2007 Movie! It appears that I may get my wish after all. See? See? This blog is changing the universe. Hah, take that, non believers.)

Right now, I should be in the shop planing and jointing roughcut birch planks for the display cabinets. If not that, then I should be writing. I may have mentioned somewhere that I have delusions of becoming a writer full time. To that end I've been working on a novel for a while now. I'm maybe 3/4 of the way through the first draft at this point and I've been at a standstill for going on a year. The problem is, or was, that the plot has become complex enough that it requires full time attention and up until now I just haven't been able to concentrate on it. Now that I'm retired from the military, and more importantly school is back in session and my son is gone most of the day, I really don't have an excuse - and if that wasn't motivation enough, my wife has made it pretty clear that I will not be spending the rest of my life puttering around in the wood shop.

The novel is a puzzle, a scifi locked-room murder-mystery told in the traditional mode (i.e. ahhh ha! The butler did it!). It is multi-view point. It explorers a new world. It will change your life. Because that's the kind of stuff I like to read. If that's not enough for you, it's also illustrated with a number of sketches, maps, and drawings - by me.

Here's a sample, try to contain yourselves. This was done using a Gateway CX2618 Convertible tablet and Art Rage 2.5. The creature is a large predator, the Greater Maul, and figures somewhat prominently in the story. 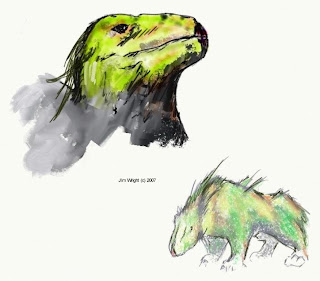 Email ThisBlogThis!Share to TwitterShare to FacebookShare to Pinterest
Labels: Things that I should be doing