This is the face of the Republican Party today. 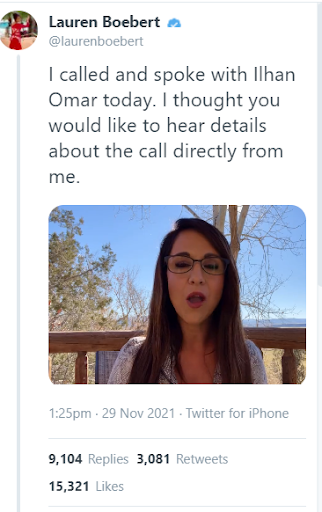 No ideas, only obstruction.

No leadership, instead only bluster, bombast, and threats.

Arrogantly self-righteous. Violently xenophobic. Confidently uneducated. Inordinately proud of their own miserable ignorance. Wrapped in the flag of dogmatic nationalism, mindless patriotism, and self-righteous piety. Waving a gun and their Bible -- without respect or understanding for either.

This is what the Republican Party has become: Lauren Boebert.

By now I'm sure you've heard about Boebert's bigoted "joke."

Boebert was in Colorado, and told her audience that she was getting into an elevator at the Capitol when she saw a Capitol Police Officer running toward the doors "with a look of fear."

Oh no! What could it be! Why was the officer afraid for Lauren Boebert? Why?!

In the story, Boebert responds to the officer's panic for her wellbeing by saying, "I looked to my left and there she is: Ilhan Omar!"

Beobert dropped the punchline: "And I said, 'well, she does not have a backpack, we should be okay!'"

The audience laughed, of course.

Omar, who as a child refugee escaped civil war, terrorism, and genocide in Somalia, who came to America specifically because her family believed in the promise of this country, freedom, justice, civil rights, peace, equality, safety, all those things that Republicans like Lauren Boebert claim they revere, the black Muslim woman is a suicide bomber! She can't be trusted!

She's not really an American.

Because vile jokes based on racist stereotypes are goddamn funny, right?

Well, they are to Republicans anyway. Q.E.D.

Patriot: the person who can holler the loudest without knowing what he is hollering about.
- More Maxims of Mark, Johnson, 1927

Bobo "apologized" for her "joke."

But, of course, the apology was bullshit, a trap.

Boebert only wanted to get Omar on the phone so she could spew more hate. And when Omar hung up rather than listen to it, Republicans declared victory and bemoaned Omar's "intolerance."

This is what bullies do.

This is what the Republican Party has become.

They attack and harass and terrorize those they defines as "weak," and when they're caught and called out, they declare themselves to be the real victim.

That's what the Republican Party has become: A rabble of dimwitted goons, bullies, thugs, who perpetually play the victim and pander to the lowest, most base elements of our society.

It's not just Boebert.

It's the craven cowardice of an ideology based on hate, fear, and cheap laughs.

And until the GOP takes responsibility for their own shitty behavior, until Republican leaders (so called leaders anyway) step up and hold members of their own party accountable for their unacceptable hate, until they expel these vile racist dimwitted pandering thugs from their caucus, then those like Lauren Boebert are the face of the Republican Party.

Lincoln would have beaten these miserable goons with a hickory axe handle.

Which is why those who think like Lauren Boebert murdered him.

Fellow citizens, we cannot escape history. We, of this Congress and this administration, will be remembered in spite of ourselves. No personal significance, or insignificance, can spare one or another of us. The fiery trial through which we pass will light us down in honor or dishonor, to the latest generation.
- Abraham Lincoln