I have a new story out.

It's in the latest anthology from B Cubed Press.

It's called The Miracle Man and is set in the same universe as my previous story, The Deserter. Both installments share a character -- though in-universe the tales are separated by several decades -- and it seems I am now writing stories set in this universe because I'm sitting here looking at least a few more in various stages of draft. Eventually, they may become a stand alone novel or anthology.

What's it about? This new story? This world?

The genesis for this new story and the previous one, is Clarke's Third Law: Any sufficiently advanced technology is indistinguishable from magic.

Clarke formulated that idea when writing 2001: A Space Odyssey and it describes a lot of the third act in that work. Clarke was describing aliens that had advanced to the point where their technology could not be understood by human science. Science could not even see how it was possible to get from here to there. From our perspective, the alien civilization detailed in 2001 was, for all intents and purposes, magic.

There's an obvious corollary, thus: Any sufficiently advanced being is indistinguishable from God.

It's a simple idea, but it's impossible for the current state of human intellect to visualize such a being.

Which is why the gods of human religion often end up described as petulant, petty, vindictive children instead a vast all-knowing all-powerful consciousness capable of creating worlds.

Not that any vast all-knowing intellect capable of creating worlds is likely to give much of a damn about us.

I mean, would you really want to meet such a being?

If that being, that vast intellect a million years beyond human understanding isn't God, well, it might just well be. And when the unstoppable agents of that intelligence walk the Earth, when they part the seas and raise up mountains and level cities and do what they do without regard for human concerns, well, if they are not angels, if that's not magic, there is be no practical difference to those caught in the maelstrom.

Now, imagine if you will, a conman, who sells salvation on the installment plan in that world, the one where Rapture has come and creatures more terrible than any in the Old Testament walk the earth for real, until one day when he meets his god face to face.

And that, right there, is the background of The Miracle Man.

I think it might be the best thing I've written.

Maybe you will too.

But if you don't care for my story, well, there are 25 other ones by some really fantastic writers that you might enjoy instead. 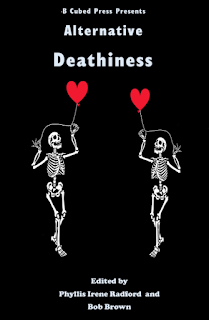 From the press release by Editor Bob Brown:

I’m coming for you is a bad movie line. For Death it is a promise. We tend to like to avoid the concept of death, but it keeps finding us. So we put together a book.

But what to call it.

We were sick of death coming in and taking friends and family, giving no regard for us except to leer from the darkness. The answer came, in a callout to Steven Colbert: we opted for Deathiness.

I believe it was her fault that I found myself being carried out of the house with a couple of pulmonary embolisms and realizing that most people who were in my condition met the grim reaper.

So I resolved to change my life, be a nicer person, give up cheese products and…

Nah, I decided to invite the B Cubed family on board to talk about it and maybe have a laugh at Death’s expense.

So Death, be warned:

We’re Coming for You!

And we're doing it with these great stories:

In "The Bodies We Carry" K.G. Anderson, one of the great up and comers writing about how to make death more real.

In "The Miracle Man" Jim Wright gives another chilling look into the world he created for the Best Selling Alternative Apocalypse.

In "Instructions for My Executors" Clare Marsh treats us with a poetic look at death and what the family should do.

In "Rule 49" (perhaps my favorite) has Maureen McGuirk looking at death as a real entity and shows us their many faces.

In "Spoons," Jay Wilburn dips into a well of thought and sensitivity as he makes death into a gentle journey that is not taken alone.

And "Gallows Humor?" Michael Mansaray takes a unique look at the inevitability of death that must be read to appreciate.

"For What is a Man" is David Foster's quest for an answer to the question with no real unswer.

"Mudpaws and the Tall Thing" Frances Rowat is a touching story reminiscent of the work Mike Resnick that sees the worlds end from the perspective of a lovely dog.

"A Comedian’s Valediction Forbidding Mourning" is the wonderful Larry Lefkowitz's reminder to laugh.

"The Thing Underneath" is a wee bit of horror by James Van Pelt.

"Have You Ever Been Experienced?" is an old theme made fresh by Paula Hammond, as she shows the power of being addicted to death.

"Death’s Scout" is Mark O. Decker thoughtful poem that I'll let you read rather than read about. It's that good.

"Papercut" by Larry Hinkle will make you throw this book out the window in disgust and horror, only to stop the car and retrieve the book to read it again.

"Death's Doorway" is Diana Hauer's incredible story of those who walk beside us through that final gate.

"Missing" by Robin Pond is that story that makes you want to read a hundred more just like it.

In "Final Questions," Chris Kuriata, adds to the duties of death to in this thoughtful look at unanswered questions of the dead.

"The Borrower" by Katie Sakanai speaks to the value of the human spirit across space and time.

"Three O’Clock" is Lamont Turner's nicely done story on making the best out of a bad situation.

"To Do Right", by Cory Swanson, shows us a better way to die. A good end to life is not to be underestimated.

"Old Forgotten Grave" by Bill Camp is a familiar but comfortable reminder that all of us will be forgotten.

"Ashes," by my dear friend Lizzy Shannon is a touching look at the end of life.

"The Devil’s Backbone," by Larry Hodges, brings his trademark humor to what happens when the Devil takes on the Good Humor man.

"Written in Stone," by Lauren Stoker.

"The Four Horsemen (and Women) of the Apocalypse" by Sarina Dorie

"Rest In Virtual" by Tommy Blanchard

"Loving Death in New York" is poet Alicia Hilton's look at death on the streets of the Big Apple.

The print version  of Alternative Deathiness is here

And the Kindle version is here

I was supposed to be at this year's World Science Fiction Convention, WorldCon, in Washington D.C.

B Cubed Press and Bob Brown were bringing copies of Alternative Deathiness that I -- and the other writers involved -- intended to sign for interested readers.

Unfortunately, like Bob said up above, Death herself tends to irony.

And in my case, I had to drop out literally at the very last moment due to a death in my family.

So, we're a little late getting to the new book, but it'll be all that much better for it.

Note: if you'd like to read my other story in this universe, The Deserter, you can find print and electronic versions here.