Oh. My. God! Not the sweet potatoes!

First Joe Biden took away our turkeys and our hams.

Now he's come for our pie!

You know, I didn't want to straight up call Ted Cruz, a Senator forsooth, a goddamn pandering liar.

So I went to the cheapest, low-end grocery store in my town, the place that doesn't know how to order stuff even when there isn't a "supply chain crisis."

And not just the lowest end store in town, but a damn low end town. This place isn't exactly a hub of commerce and transportation. Hell, I have to drive across the bay into Pensacola just to get a USB cable. So, if there's any place that the shelves ought to be bare, it's Winn Dixie in Milton, Florida. 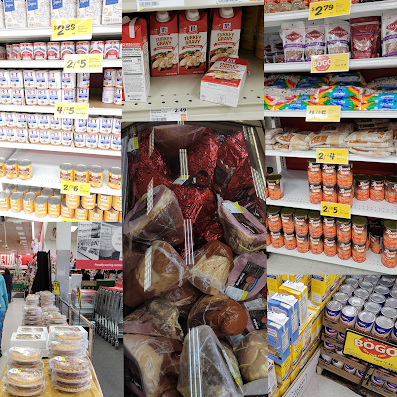 Except, the shelves were stocked.

Turkeys (fresh and frozen, also various parts you could just buy out of the regular freezer if you only want a certain piece of the bird), ducks, ham in five different kinds, yams (canned and fresh), potatoes (russets, yellow, red), produce, pumpkin, condensed milk, brown sugar, broth of every kind imaginable, baked goods and about the only thing missing from this Thanksgiving bonanza was a band of Narraganset come to show you pilgrims how to plant corn in the New World.

There was even gravy, boxed, canned, and in a jar. In five different flavors, including turkey.

Turns out, Ted Cruz is a goddamn liar.

But, just inside the door, there's a big florid guy in a Trump hat and some sort of shirt with eagles and flags and guns shouting into a phone: Ya'll betta git down heya! The shelves is empty!

I mean, this guy can literally see the shelves are not empty with his own eyes, but he's such a programmed tool that he believes Ted Cruz and Tucker Carlson over his own senses.

These people simply do not exist in the same reality with ... well, reality.

There was plenty of everything else too. Plenty of butter, milk, eggs, Pop Tarts, frozen burritos. Toilet paper. Tums...
The produce looked a little skanky, but it's Winn Dixie. The produce always looks a little skanky.
Sometimes a lot skanky.
Another aisle, another big florid dude shoves in past me and starts grabbing "family" sized bags of Doritos from the end cap. Says to his wife, "Two fer $4.95! We better stock up!"

He filled up a cart. A whole cart. Two for $4.95. He really likes Doritos, I guess. Better get 'em before Joe Biden does.

My point being that if you're leaving the store with a whole separate buggy full of Doritos, there ain't no "supply crisis."

Look here, in addition to the 15 different kinds of Oreos in the the cookie aisle, they had a totally separate display at the front of the store for Christmas Oreos.

You could have fed the entire Plymouth Colony on nothing but bags of Oreos from this store.

There are people, too many people in far too many parts of the world right now today struggling to get enough calories just to stay alive. But we got 20 different kinds of Oreos and Family Size Doritos 2-for-$5 and Ted Cruz is mad because he read a Yahoo News article about a shortage of ... gravy in a box.

I guess at this point we should just be glad Ted Cruz is tweeting about gravy from Washington D.C. and not Senior Frog's on the beach in Cancun.

Anyway, I look forward to the Republican plan to fund and train more truck drivers.