The first shot in the War On Christmas. 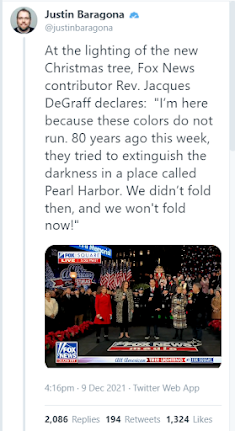 Fox News' Jacques DeGraff is pretty sure it was the work of the Imperial Japanese Navy:

Somebody asked me, why are you here? I'm here because these colors don't run. 80 years ago, this week, they tried to extinguish the darkness in a place called Pearl Harbor. We didn't fold then, and we won't fold now, because we've come this far by faith. In our tradition we say, this little light of mine, I'm going to let it shine. The red, the white, the blue, and the light of America, we're going to let it shine.

The forces of evil have declared war on little Baby Jesus! These colors don't run because the Christmas Tree is basically the American flag ... or something, anyway: Open the silos! Deploy the fleet! Get the bombers into the air! Hoist the colors! Sound the trumpet! We won't back down! USA! USA! To be honest, I'm not really certain what "extinguish the darkness" means, but it sounds defiantly patriotic and that's what counts.

When the Japanese stage a sneak attack on your ... Christmas tree, I guess?

Well, "Christmas Tree" quote unquote. Given that it wasn't really so much a tree tree as a giant metal cone with a bunch of highly flammable fake evergreen branches stuck on that exploded into flame so fast it made the Hindenburg look like your dad trying to light the charcoal grill on a rainy Friday night.

A fake tree burns down and, goddamn, it's Pearl Harbor. It's 9/11. It's an attack on Christianity! It's liberalism run amok! It's defund the police! It's the Antifas and the BLMs! This is Joe Biden's America where no tree is safe! It's cities overrun with crime! It's...

You think I'm engaged in hyperbole, do you?

According to Fox News, a homeless guy with mental health issues lights a fake tree on fire and it's a symbol of everything wrong with their world, a direct frontal attack on God himself, and apparently America.

Never mind that Jesus himself once cursed a fig tree to death because it had pissed him off.

But then, isn't this one hell of a metaphor for the Republican version of Christmas?

The tree is fake. And flammable. A danger to the public. A fifty foot tall glowing symbol of over-the-top commercialism that was stolen by Christians whole cloth from some ancient pagan winter festival. We gonna learn how some jolly fat man in a red suit is a stand in for Jesus next? The reindeer are The Disciples or something? I mean, they drank a lot of wine in the Bible so maybe the glowing red nose...

But if this was any holiday special from previous decades, the show would end with Fox News learning the true meaning of Christmas. Steve Doocey, Greg Gutfeld, and the stogie puffing ghost of Rush Limbaugh would join hands amidst the ashes and they'd sing Christmas carols with New Yorkers while Tucker Carlson tossed presents to orphans and Rupert Murdoch would lean out the window on Christmas morning and shout in his quavering Australian accent, "You boy, what day is it?" and his shriveled leathery heart would grow two sizes when he learned he hadn't missed it after all because Christmas isn't about giant exploding Nazi Zeppelins but love and kindness and Bill Murray leading everyone in a rousing chorus of Put A Little Love In Your Heart and...

But that's the thing, isn't it?

Christmas isn't supposed to be about who has the biggest ... Yule log.

It's supposed to be about the birth of the Christian Savior, right?

John 3:16. Yeah? Remember that? For God so loved the world that he gave his only begotten son and so on and so forth forever and ever amen and lets nail him to a cross?

No? I'm the only one who went to Sunday School? Really?

Okay, but isn't that what these red-face seething Republicans keep telling us? Jesus is the reason for the season! Fuck you, liberals! Peace. Love. Forgiveness. That sort of thing? Charity. Giving. Putting others before yourself. Healing. Spiritual renewal. MERRY CHRISTMAS! Not Happy Holidays, you godless pinko!

"To give up one's very self — to think only of others — how to bring the greatest happiness to others — that is the true meaning of Christmas.
-- The American magazine, Vol 28, 1889

That, right there? Right? To give up one's very self. To think only of others. Bring the greatest happiness to others.

Do you really need a tree for that?

Instead of rage and chest beating and Pearl Harbor, wouldn't the real lesson of Christmas be to stand in front of the ruins of their silly fake tree and actually honor the birth of their savior? Feed the hungry. Clothe the poor. Heal the sick. Do unto others as you would have them do unto you. Forgive each other. Love conquers all. Judge not. Deeds, not words. You know, that sort of thing.

I mean, their God likes to test people. What if this was the test? And they failed?

I don't know. It's not my religion. But, you gotta wonder: what would Jesus himself have done?

But then, these people don't really believe in their religion or the lessons of their own supposed savior.

To them, Christmas is just another weapon they use to bludgeon those they hate.

And the people bowed and prayed
To the neon god they made...
-- The Sound of Silence, Simon and Garfunkel