Too Damned Stupid to Get In Out of the Rain

Behold, the key to happiness, The bucket theory:

To those who have been given much, much is required. I take that admonishment at face value. Not out of fear, but with joy, with confidence. And that you need to understand that, not about me, but let my little example inspire you to do the same thing. I want to give. It's my privilege. It's my honor. It's my responsibility. But I also believe in what I call the bucket theory, and I never heard anybody say this theory before, but I think we're all given buckets and we all start with the same size bucket. And what do people do, if you're collecting rain water, because you're thirsty, you're collecting rain water people have a tendency of doing this, they will cover their bucket to protect it. I believe, take your bucket, blessings rain down on you all the time, take your bucket. And if you see somebody who needs water, there's more, it's raining all the time: Empty it. Eventually, somebody who's handing out the buckets is going to go: You know what, get that guy more buckets, get him a bigger bucket. Stop protecting it. Give it and more will come.

There you go, folks. Thanks for coming, work hard, be happy, and remember to wear a rain jacket.

What do you mean the Bucket Theory sounds like gibberish babbled by a meth addled seizure monkey with a head injury?

Perhaps you just need to read it again, slower, and sound out the big words. Here, let me help:

First rule of Bucket Theory, nobody talks about Bucket Theory. There’s a guy with a bucket.  See his bucket. He is joyous and happy. Because he has a bucket. But it’s not about him. Or his bucket. Or maybe it is. Let’s follow his example. Everybody gets a bucket. All the buckets are the same size. Some thirsty people collect rainwater by covering their buckets when it rains to protect it from the rain that they are collecting. In their buckets. Because they’re thirsty. And it’s raining. It rains all the time. Everybody has a bucket. Buckets are fun. If you see somebody who’s standing in the rain with a bucket but has a thirst on, you should empty your bucket. Then the guy who hands out buckets will give you a bigger bucket. Pretty soon you’ll have lots of buckets. In the rain. Where there are people with buckets. Who are thirsty. Then you can collect more rain. In your big bucket. Because you’re thirsty. Don’t protect your bucket. It’s raining.  Thus, joy and satisfaction.

I know, I know. It is a seductively compelling philosophy, this theory of the buckets. Sucks you right in, doesn’t it?

It’s like Japanese poetry – if Japanese poets were also meteorologists who dropped acid and ate bad Fugu sushi while listening to The Doors lyrics rapped by a prepubescent Japanese schoolgirl Punk/Furry-slash band in a typhoon. 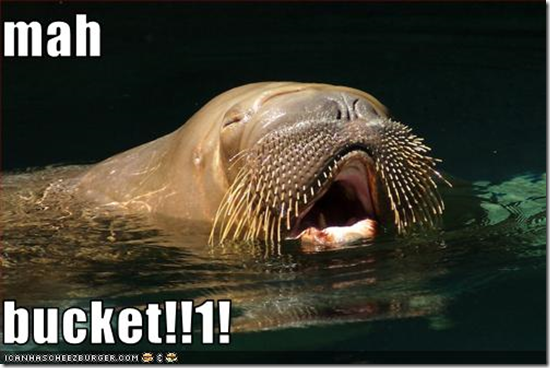 From the context of the article that this theory was taken from, and the previous writings of the great humanitarian who penned it, if you boil away all the bullshit and Ah Shucks hand waving, what the above paragraph says is this:  Everybody is born equal. Everybody has the same opportunity. However, some folks are more equal than others because they take risks or are luckier or are favored by the Big Bucket God.  Since they have more, they should get more because they deserve it.  It is the responsibility of those people to help out those less fortunate. They should be honored to do so. They should set the example of charity.

Moral of the story: Don’t protect what you have, give it away, and somebody will give you more.

Rich people should give their money to poor people?  The fortunate should help out the less fortunate?  Those who work hard collecting rainwater should give their buckets of tasty refreshing life-giving H2O to the thirsty? No questions asked? Just out of the goodness of their hearts?

What kind of socialist bullshit is that?

Read that first line again: To those who have been given much, much is required.

Sounds a lot like “redistribute the wealth” and “tax the rich” doesn’t it?

Honest to God, folks. What if people really thought like this? It would be a hippy utopia wet dream (literally, since we’d all be standing around in the rain). This is the kind of naïve, simplistic liberalism that just encourages lazy people to stay lazy and robs America of her greatness by bringing on the welfare entitlement state – you starting giving people water without making them work it, and pretty soon they start demanding it as a right.

In the same article, the author of this socialist manifesto also said:

Look, I don't have a side. My side is the idea of what was called the American experiment. It was an experiment. Now, are we going to move past it and say, yes, it failed? Or are we going to take the things that we learned, take the best of those ideas and continue to go forward for our next great leap for our children and our grandchildren?

He doesn’t have a side? He wants “go forward” and make “our next great leap” (for the children, of course). He starts out sounding like a Moderate and ends up talking like a Progressive.  And it gets worse.  He’s also the kind of guy who believes in giving people free healthcare. Again, in his own words:

I employ forty people in New York City. I have the best health insurance for everybody and nobody pays a deductible. It's the best that money can buy. I'm told that the insurance that I pay for my employees is actually, uh, I'm the only one in New York still buying it because it's too expensive but I believe in treating people right.

You give a man a chance to better himself and his children and he will push himself. He will work day and night. He will have sleepless nights. He will do everything we can, especially if he has an idea and something in his heart that he believes in. He will work tirelessly because he believes in it and it will do great things for him and his family and his community.

Communist, socialist, progress, moderate, RINO, whatever this leftie is, he’s obviously the kind of guy the patriots of the TEA Party would tear to pieces. Obviously.