Where the Hell is Katie Couric When We Need Her?

Did you see the Palin Interview last night on the O’Reilly Factor?

Well, then you really missed something special.

It was like when that comet, Shoemaker-Levy 9, broke apart and slammed into Jupiter in a blaze of destruction and death and catastrophe on a cosmic scale so large that it defied comprehension and all you could do was sit there with your mouth agape in utter disbelief at the astounding unbelievable horror of it all as tons of ice blew up in fireballs larger than the earth and every time you thought it was over it wasn’t and each explosion was larger than the last and it just kept getting worse and worse and worse and you thought Fuck! at least it didn’t hit us but what if it did because that would be the end of everything ever and yet how damned bizarropants is it that there are people hoping and praying that something like this does happen to the Earth because their brains are like little chirping crickets hopping madly about in an aquarium full of starving garter snakes?

Shellacked hair like a Waffen-Schutzstaffel helmet, unblinking black-eyed lizard-alien-in-a-rubber-human-suit stare, enormous icebreaker prow of a jutting chin that reminds me of evil mirror-universe Jay Leno, and that uncanny fixed death’s head rictus — it was as if Palin was a parody of Tina Fey channeling Sarah Palin in some creepy incestuous psychic-connection feedback loop of bowel liquefying vapid ignorance. Every time I hear this women speak it becomes more and more obvious that Walt Disney’s animatronic Abe Lincoln has more going in the brains department … and a smoother more life-like appearance. 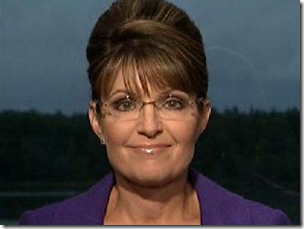 It was as frightening as a giant ball of ice hurtling towards the earth at cosmic speed.

I’d like to reprint the interview here verbatim, because, seriously folks, Palin’s own words demonstrate more than any sarcastic mockery I could write just what a complete and total tool this sad silly ignorant hateful women is. However, Fox transcripts are copyrighted material (one suspects that this is less about protecting their intellectual property [Ow! Ow! Ow! My fingers cramped up typing that] than making sure Rupert Murdoch’s abject partisan booger eating stupidity doesn’t fall into the wrong hands – like, say, somebody with more than two brain cells rubbing together). So, here go read it before continuing on.  I’ll wait.

See? And you thought I was engaged in exaggerated hyperbole.  Foolish reader.  It’s ok, stop crying, you’re safe now. Here, breath into this paper bag until the blood flow returns to your frontal lobes. Feel the tingling? You’re going to be ok, though the urge to vomit and the black spots in your vision may persist for several days. Also, you owe me $5 for the barf bag.

This, my intestinally-cramping electronic friends, is the flagship of FoxNews. Goddamn, they must be proud, eh?

It’s like a cosmic ball of icy cold crazy aimed right at the bridge of your nose.

With O’Reilly as her idiot straight man – like some bizarroland Ed Mc’Reilly to her animatronic Johnny. Maybe when they make the Palin movie, Bill O’Reilly can be played by a dancing organ grinder monkey chittering on the end of a chain with a little hat on his fuzzy head and an outstretched tin cup.

For those of you who lacked the intestinal fortitude to click on that link, allow me to summarize the interview.

However, there’s a catch.

See, what I’m going to do is insert a couple of actual no fooling verbatim quotes from Palin in the sarcastic paraphrase below. Hint: look for… ahhh, you know, to hell with it. No hints, you’re on your own.

Help us Govna Sarah, help us! Yer so pretty! Yer so smart! What should we do?

Bam! There it is, right there! Stop the gusher! Holy mackerel! Why didn’t Obama think of that? It’s just common sense. It’s so obvious once you point it out! Stop the gusher! Damn, eight weeks now and Obama never once thought to stop the gusher.  Thank you, oh thank you, Lord Holy Jesus God, for making Sarah Palin and her cunning plan. And her boobs, all three of them. Amen. [boom chica bow bow]

Just one little tiny thing,  how, exactly, do we stop the gusher?

Palin: We need to make sure all technology is thrown at this problem!

Ooooooh! All technology! Brilliant, just brilliant! That must be more of that famous common sense! It’s like a magical superpower! Isn’t she wonderful, ladies and gentlemen? Let’s give her a big hand. Praise be to Super Father Lordy God Jesus, hurrah! We’re saved!

But…uh, just one little thing I’m unclear on, not to be an oil soaked wet blanket or anything, but what technology exactly?

Oh yes! I see now. Use technology technology. Wonderful, wonderful. Just, though, um, hate to be a bother but could you maybe give us just one little example of some specific technology that you’re talking about?

Palin: These are not the droids you’re looking for…

I, what? Oooooo, my head feels fuzzy and I’d like a cup of tea. Wuzzah? The blinking lights and beating drums have confused me. These are not the droids we’re looking for?

Okey Dokey. Well, in that case, please feel free not to answer the question and then change the subject to cover up the fact that you have no goddamned clue as to what you’re talking about in any way, shape, or form and that inside your head you’re quoting Rocky and Bullwinkle to yourself.  Also? Could you make some kind of vague and unsupported ominous hand waving? Yes. Move along, move along. [also, do the boom chica bow bow thing again]

Hey now! I took too much Viagra last night and my boner hasn’t gone down yet! [Check it out, cat couldn’t scratch it! Boom boom chica chica boing boing]

Palin: What the government should have done was accept the assistance of those great patriotic Europeans who this week I think are really cool but next week I’ll be back to calling socialist commie homo baby aborting subhuman Nazis (except for Israel, woooooooo I love them) and, of course those great patriotic entrepreneurial American patriots who are patriotic in their entreprenualinest ideas.

Palin: They can't even get a phone call returned, Bill. The Dutch. They are known in the Norwegian. They are known for — for dikes and for cleaning up water and for dealing with spills. They offered to help and, yet, no, they too, with a proverbial can't even get a phone call back. That is what the Norwegians are telling us, and the Dutch are telling us. And then the entrepreneurial Americans, the company in Maine that has the boom and the absorbents, those companies that are waiting for the Obama administration eight weeks later for the regulators to come in and say, OK, we'll purchase from you now. We'll do all that we can. That's where some of the frustration is.

I’m sorry, I can’t hear you over the sound of the awesome gibberish coming out of your mouth. I swear to Holy Lordy Jesus Vejazzled God women, you’re like a brain damaged monkey humping a greased football. Do they even have a name for what’s wrong with you? Was that English? All the words sounded like English but they don’t make any sense together! The Dutch are known in the Norwegian? Regulators purchase. Regulators? Since when do government regulators go to Maine and purchase spill response equipment. What the fuck are you talking about?!

Palin: I don’t want to point fingers and make this all partisany like…

Palin: …but you know that’s how I make a living bilking millions out of the suckers. Anyhoo, like I was saying national security, safety of the people needs to be the top priority.

I thought you said stopping the gusher was supposed to be the number one priority?

Palin: No the number one priority is to unfund the funding of the periphery funding things that get in the way of the private sector’s progress to produce their ability to prosper. Thrive. Prosper. Now, as the super bestest ever governor-overlord of the great nation of Alaska, what I did in dealing with the oil companies. I had to set up our Petroleum Systems Integrity Office so that we could be there on the front lines making sure what the oil companies were telling us was legit, when they were dealing with their corroded pipes that we found out and other lax maintenance issues.

Oh, good point. That’s probably why there weren’t any oil spills on your watch, well on the part of your watch you actually stood, right?  That’s probably why you quit, right? So that you weren’t the governor who did the legit finding out of the corroded pipes when there was huge spill on the pipeline like, oh say, last month which would have been while you were governor except you bailed out and apparently your big damned leadership didn’t have any lasting effect. But hey, fuck it, it’s not like I’m gonna call you on it [wink wink].There wasn't anybody from the management service or whatever, Mineral Management Service, out on the pipeline checking it out. That's for sure.

Yep that’s for sure. Yep.

Got it.  No demonizing, because you’ll need their contributions in 2012 right? Thanks for coming by, Govna!

Did you spot it? Could you tell the sarcasm from the real Palin?

Look to the skies, folks.

If we’re lucky, a giant comet will kill us all and end the agony.