The Most Awesome SciFi Music Video Ever

I was going to vote for The Devinyls I touch Myself.

The I Touch Myself video isn’t scifi?

I mean, damn! what the hell is your definition of fantasy anyway. Seriously, don’t.  Just don’t speak to me. Jim needs some quiet time.

Michael Jackson’s Thriller? Best line? “I’m not like other guys.” Really?   Gotta love movie audience Michael all not sensitive and shit – because you know in real life in an actual zombie movie he’d be screaming like a little girl. I’ll admit he was one talented little weirdo in his Thriller days, but the video is just too slick and big budget to qualify for "Most Awesome.”  (And don’t even start with the but Jim isn’t Thriller more like a horror video instead of scifi or even fantasy? One word: Zombies. Zombies are totally science fiction).

How about ZZTop, TV Dinners? Goddamn, I loved the Eliminator album (but then who didn’t?). But, again it’s just not hokey enough to qualify as “most awesome.”

Maybe Tom Petty’s post apocalyptic Mad Max/Cherry 2000 mashup, You Got Lucky? Naw. Not even close (Cherry 2000? And you call yourself a science fiction fan. Really).

Oh. Wait. How about Billy Ocean and the Star Wars cantina, ur I mean Lover Boy?  (Oh, don’t even act like you’re not singing along and doing the air guitar on this one. Plus, you know you’d do the elf chick). Lover Boy is pretty damned cheesy alright.

But, it’s not quite cheesy enough.

For cheese you’ve got to have a daytime TV soap star turned bubblegum rocker and teen squeal idol. 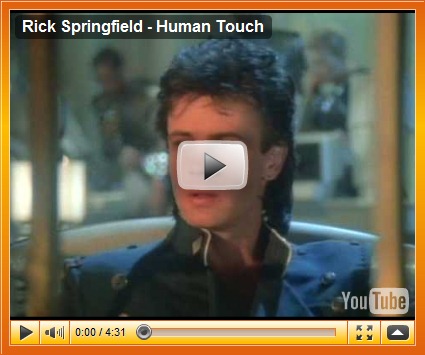 Springfield once lived with a girl known for being possessed by the Devil.

Seriously, look at that hair and tell me you’re not watching the most awesome scifi video ever.

Email ThisBlogThis!Share to TwitterShare to FacebookShare to Pinterest
Labels: Things about music, things about scifi