Republican Senator from the state of Iowa.

He's 88-years-old, he's in his seventh term, four decades in the Senate. He is, in point of fact, the President Pro Tempore Emeritus of the United States Senate. 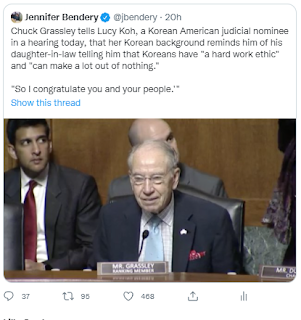 "So I congratulate you and your people."

Judge Lucy Koh is an American, born in Washington D.C. She's a graduate of Harvard Law. She was an attorney for the US Department of Justice, Special Assistant to the US Deputy Attorney General, and then an Assistant US Attorney for Central District of California. She then went into private practice representing major technology companies in patent and trade secrets before being appointed Santa Clara County Superior Court Judge by then Governor Arnold Schwarzenegger and then appointed by Barack Obama as US District District Court Judge.

But all Grassley saw was an Asian woman.

It's right there in his own words, "your people."

You think he would have said that if Koh's ancestors had come from Western Europe?

Somewhere right now, congressional staffers are patiently explaining that's it's not 1950 to Chuck Grassley and he's just shaking his head and saying, "I don't get it."

Of course when I said that on Twitter, well... 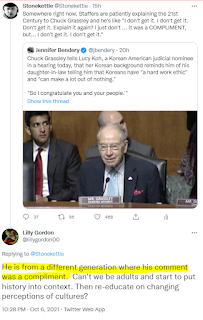 He's from a different generation where his comment was a compliment.

Tell me, which generation was it where "yer one of them 'good' minorities'" from an old white man in power wasn't condescendingly racist?

What context makes that okay?

When this person says "put history in context" what they mean is whitewash it so they can pretend that doesn't exist.

That's the goal. Erase that history. Pretend it doesn't exist, until it doesn't. 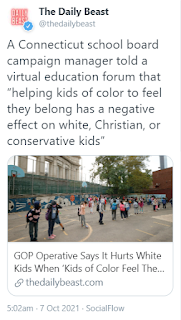 The history of racism in America is painful.

It's shameful. It's embarrassing.

It should make all Americans of conscience feel bad.

It should make them want to be better.

Since the hysteria over Critical Race Theory began a few months back, I've watched my feeds for examples of the sort of unconscious and embedded bias CRT attempts to educate people about. Grassley's comment above is an obvious and egregious example. Of course he's not the only member of Congress, my erstwhile boneheaded dinosaur of a Congressman Don Young comes to mind. As does Donald Trump.

But it's not just members of government.

I know this person thinks she's being woke and aware and whatever word we want to use, but look at that. Look at the embedded unconscious bias. What if people in "poor" countries don't die from malaria, how will we feed them all?

She'd likely be aghast if I'd said: We should restrict medical care to only those people who can prove they are productive members of society or who are rich enough not to be a burden on the rest of us if they live a long time.

But she is essentially saying the same thing, only couched in a manner of concern for some imagined  future "humanitarian crisis" in "these very poor areas."

Very poor areas that just happen to be inhabited primarily by people of color.

It's not a generational thing.

It's a perpetuation of bias and racism in our thinking from one generation to the next.

If Americans are ashamed of their past, then they need to face it, change the present, and create a nation future generations can be proud of.