Or perhaps "bait" is a better word.

I mean, no matter what I post, it's bound to provoke someone. Q.E.D. And that's just how social media is nowadays.

So, why not put that tendency to use?

Thus: sometimes my comments, particularly on Twitter, are not for my regular readers so much as to poke the other side. To stimulate conversation. 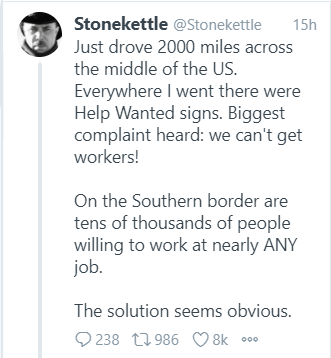 See, if I say for example: "We should pay people a living wage" most of you would respond with a shrug and an "Okay." If you responded at all.

And where's the fun in that?

Just drove 2000 miles across the middle of the US. Everywhere I went there were Help Wanted signs. Biggest complaint heard: we can't get workers!
On the Southern border are tens of thousands of people willing to work at nearly ANY job.
The solution seems obvious.

...well, then I get a three-day long discussion of labor in America. I learn stuff.

Yes, I do indeed realize that this technique may perhaps make me, in fact, a dick.

So what else is new?

In this case, I wanted to test my own assumptions, chief among them this:

There are Help Wanted signs everywhere. You've seen them, haven't you? Me too. I just drove 2000 miles across this country and everywhere I looked, there were signs saying "We're hiring!" Every restaurant I stopped in said, "Please be patient, we're understaffed." There were several fast food places that had closed their lobbies and dining rooms and only kept the drive-in window open due to this alleged shortage of labor.

Don't take my word for it, go drive across the country and see for yourself.

It's in every store window. It's on every news channel. It's in the mouth of every politician.

We can't find people to work.

We can't find people to do the jobs.

And yet, weirdly, at the same time, the economy is terrible, right?

I was traveling with my adult son.

Just outside Springfield, Missouri, we stopped at a gas station to fill up and use the facilities.

The place was a Shell franchise, seedy, off a little used exit in the middle of farm country. The parking lot was full of farm equipment and the store was full of old white men in rough and dirty farming clothes.

I pumped gas while my son went into to use the restroom.

The restrooms were locked and the guy behind the counter said: "You wana use the toilet ya'll have to buy sometin'. Goddamn Joe Biden is ruining business and we can't afford to jus let people use the bathrooms! So you gotta buy sometin' and I'll unlock it."

My son had to go, so he bought a candy bar without comment and did his business and came back out and warned me before I went in. Also, apparently buying $40 in gas didn't count towards using the restroom.

I held it until we reached Springfield and civilization.

And goddamn that Joe Biden.

It's not this guy's poor business skills, or that his business is located in a poor location, or that he's overcharging for services, or that he's openly hostile and unprofessional to his customers, or that the Free Market he likely worships is offering plenty of better choices, or that the political ideology he no doubt embraces started a trade war and a let a pandemic get out of control -- after crashing the economy completely in pursuit of unsustainable profits in the mortgage industry. No, it's not any of that. It's Joe Biden.

And the perfect example of this hypocrisy is right there on the Southern Border.

See, here's this alleged labor crisis that every Republican politician and pundit is outraged over. And every shitty business owner in a MAGA hat mindlessly parrots. Business is supposedly struggling to find workers and goddamn that Joe Biden, paying lazy liberals not to work, right?

And, yet, here's a huge pool of workers on the Southern Border, who want to work, who will happily take these lousy, low-paying jobs without protest or demand for something better...

...and Republicans don't want to let them in.

Build a wall and keep them out, right?

But not those workers.

I mean, they could try paying American workers more, but they don't want to do that either.

..wasn't that we should perpetuate the pre-COVID business model but to point out this hypocrisy.

See, there's plenty of labor available. Q.E.D, but a Help Wanted sign in the window too often nowadays isn't a call out for future employees, instead it's a political statement.

Business could demand government let in immigrants and continue their current model of serfdom.

But they don't want to do either.

Hell of a pickle, eh?

So instead they blame Joe Biden and pretend it's not their own lousy business model that's the problem.

The problem isn't a lack of labor in America.

For Conservatives and American Business, the problem is as it always was: a lack of slave labor.