They’re seriously in your face, those labels.

The nine warning labels now required by federal law take up about half the cigarette pack, both on the front and back, and include images of a dissected corpse, diseased lungs ruined by smoking, a dying man in an oxygen mask, and images of rotten teeth and gums. The warnings must also appear in cigarette advertisements and must take up at least 20% of each ad.

The FDA estimates that in 2013 the new labels will cut the number of cigarette smokers by about a quarter of a million (Ironically, doing nothing will also reduce the number of smokers per anum by about 200,000, but I digress), followed by smaller reductions each subsequent year as people get used to the grisly images.

A number of folks wrote to ask what I thought.

I think it’s an exercise in futility.

As a former smoker myself, I predict that the new warnings won’t make any difference whatsoever. Period.

Oh, the new labels might scare away a few of the sissies, but there isn’t a smoker anywhere these days who doesn’t know what cigarettes are doing to their health – and they smoke anyway.

The new warnings will do absolutely nothing to reduce the number of smokers.

If you think otherwise, you’re probably smoking something other than tobacco.

You could mandate that all cigarette manufacturers dip their tobacco leaves in liquefied feces made from cows fed a steady diet of bean burritos and plutonium, roll the butts in a warty vellum made directly from Hitler’s enormous purple scrotum, cover each package with the toxic venom excreted by menstruating poison arrow frogs and a metal plate that delivers painful electric shocks, and include a picture on the label of Satan punching a baby in the face, and people would still buy them. And in fact, when I lived in Europe I used to buy Spanish Ducatto cigarettes that I’m pretty sure were made using this exact method – well, at least the cow shit part anyway.

These things are supposed to scare smokers and/or potential smokers?

One of the top grossing movies of recent note was a stomach churning gore-fest called Saw – and if that wasn’t enough for you there was The Human Centipede – the top news story this year was about a women who allegedly murdered her two year old daughter which also included daily pictures of the dead kid’s gruesome autopsy brought to you in full HD and brilliant color courtesy of Nancy Grace and CNN, and for the last decade we’ve watched an endless stream of death and destruction from multiple warzones across the planet with people cheering like they’re at a tractor pull. You think a picture of a corpse is going to stop people from smoking?

Compared to the bloody red images blasting from our TV sets every minute of every day, death by cancer looks positively life-affirming.

Give me a pack of non-filtered Coffin Nail Ultra Gold 100’s, my good man, and hurry it up, I’d like to enjoy a delicious smoke before cholesterol, terrorists, gang violence, global warming, Wall Street, or radiation from burning Japanese power plants kills me!

Honestly, who the hell are these labels aimed at?

Because it sure as hell isn’t smokers.

Talk about not understanding your target audience. Smokers don’t care about their health, or else they wouldn’t be smokers in the first place. They don’t need gory pictures to tell them about the consequences of smoking, they can feel it gnawing away inside their pleural cavity like the chest-burster from Alien. They just don’t care.

The only people these dumb labels will impress are non-smokers.

You want a warning label that actually gets smokers to quit?

Put a picture of two naked gay guys kissing on each pack.

Then, just for fun, make each cigarette look like a little penis.

Huh? Huh? Brilliant, right? Thank you, thank you very much. Make sure they spell my name right on the Nobel Prize.

Sure, of course you’re right, this wouldn’t work everywhere. But I’ll bet you good money that every Catholic Church, Muslim Mosque, Mormon Temple, country bar, and NASCAR track in America would be smoke-free within a week.

Oh, riiiight, side effects.  Yes, I suppose if you went with my idea you could expect a sudden increase in smoking related deaths among evangelical ministers and far right conservative senators.

So, really what you’re saying then is that there’s no down side.

Of course, one size doesn’t fit all. You’ve got to know your target audience.

For example, say every pack of cigarettes sold in Minnesota came with the following label:

Tell me the 102nd Bomber Division of the Bachman TEA Party wouldn’t be rabid anti-smokers within about five minutes.

And in the American Southwest:

Warning: Smoking has been linked to a belief in evolution and support for illegal immigration…

One dollar from the purchase of every pack goes to support our teachers!

Okay, now just hold on there, Buster, I hear you say in that raspy two-pack-a-day Joan Jett voice you use when you think I’m being one-sided, you’re talking about saving just conservatives!  What about liberals? How do we get them to stop smoking?

is now the leading cause of global warming

Please think of the polar bears!

Okay, sure, but what kind of warning label do we put on cigarette packs to keep teenagers from picking up this filthy habit? 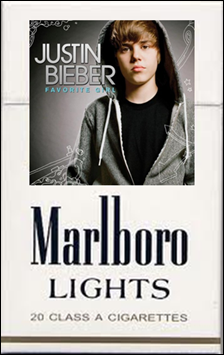 Whoops, sorry about that. I guess I should have warned you that was coming.  Whoa, you’re shaking like a leaf. You maybe wanna a Bieber to calm your nerves?

See how that works?

So anyway, logically, if we add warning labels to cigarettes, why shouldn’t we also add warnings to other things that are bad for you?

Warning: Disappointed voters have determined that sending pictures of Mr Wiggly to random women you meet on the internet could ruin your political career and cause you to make this face:

Really, don’t. For all our sakes, just don’t.

Or say cellphones. Honestly, shouldn’t every cellphone come with the following warning?

Warning: the Federal Communications Commission has determined that talking on this device while driving 40MPH in the fast lane could very likely result in a severe beating, having this phone wrapped in barbed wire, set to vibrate, and inserted into one of your more sensitive orifices.  Fucker.

Children.  Really, all children should come with a warning label, as a caution to single people and newlyweds:

Warning: Bill Cosby wasn’t a comedian, he was a prophet.  Children smell bad, they break stuff, and they cost a shitload of money. Also, you’ll never have sex again. Ever. Get a dog. Trust us.

Warning: Your face, it will look just like this.

Warning: This guy will come to your house and drink you beer.

Then he’ll screw your wife… or son. Or both.

I know. I see you there in the back, rolling your little eyes. I hear your derisive snort, I know, you think I’m just being silly now.

You think I’m going too far with this warning label stuff, don’t you?

Really, nobody would be so stupid as to impose this nonsense on the public. Nobody

Because, you know, that would be just just crazy.