Saturday in the Woodshop – Carving Day

Long time readers have seen these before.  For new readers (and there seems to be a bunch of you lately, and you know I appreciate that, thanks), I make these types of things for the local military base.  They’re given as gifts to departing officers as a memento of their service here in Alaska.

I do quite a number of the smaller, simpler ones and the basic process was described in a previous post here.

Upon occasion, I do much more elaborate (and much more expensive) pieces for senior officers – in this case a departing Group Commander, i.e. a senior Air Force colonel. Unlike the simpler designs which have only two standard Air Force challenge coins mounted on their bases, this piece was to have a much larger and more elaborate bear statuette and seven coins of varying sizes representing the group commander’s subordinate squadrons.

The customer gives me a lot of latitude in the design process, describing the general gist of what they want and leaving the actual design up of the piece to my creativity.  I happen to know the commander in question personally and wanted to do something special for him. And I wanted all of those coins visible from the front and not wrapped around the sides, since I know most of the squadron commanders too and didn’t want anybody to feel slighted.

Also? To be honest – I hate those bear statuettes. As I mentioned in the previous post, I don’t make those, they’re resin copies of some other artist’s work, the Air Force buys them and asks me to incorporate them into the finished piece.  Now, those statuettes are beautifully detailed and the original sculptor is obviously pretty damned talented - but to my eye the statue lookd like a creepy lollipop, big round head floating above a little skinny base. I can certainly understand what the artist was going for with them, given the market they were intended for, but they’re not really my thing and they’ve just always bugged me.

So, I thought I do something different with this one.

I had some time to think about it, instead of the usual rush job, and played around with a couple of ideas. Eventually I hit upon a design that I thought would work.

I started with a base similar to the ones described in the previous post, and then began adding some additional pieces like so: 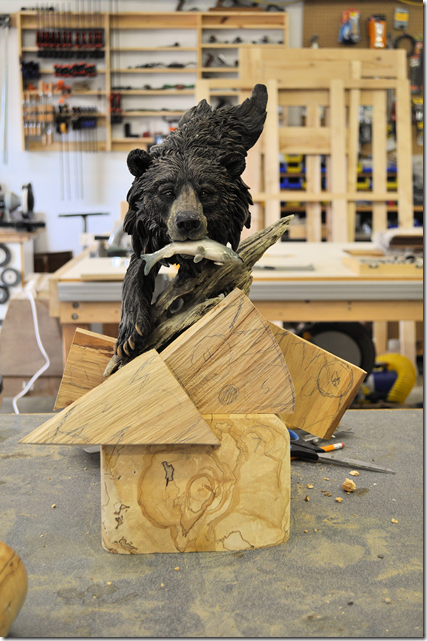 In this step, the whole thing is held together with double sided tape, so I can get an idea of how it will go together and so I can check for fit.  You can see the pencil marks of my rough outline.

The pieces are removed and cut to rough on the bandsaw. Mounting recesses are drilled for the coins and the whole thing is put back together with tape to see how it looks: 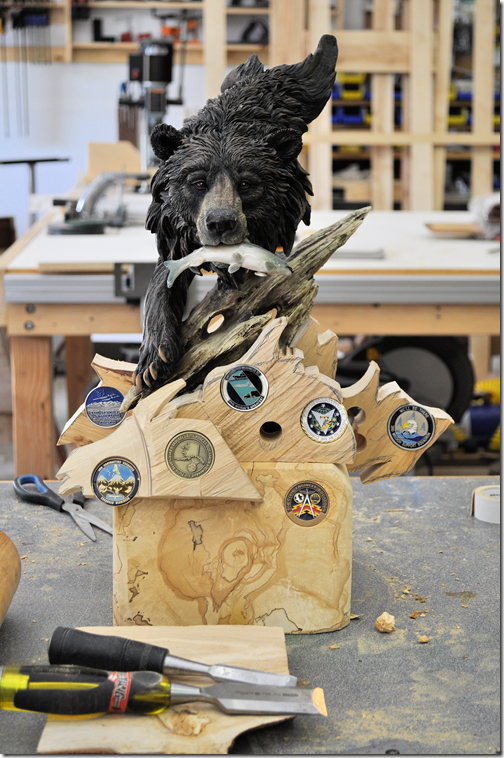 The wooden pieces get glued together. Bear and coins removed (the bear slides out the back). And I shape the wood using a variety of powered and hand carving tools. Testing for fit along the way: 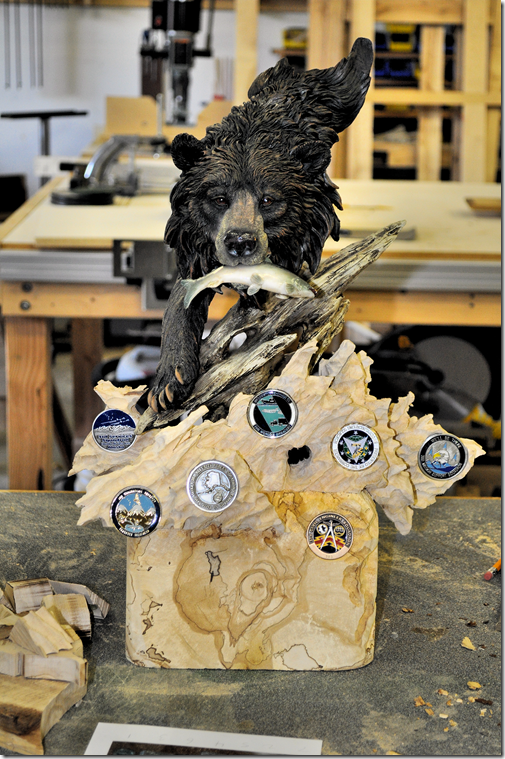 In this case, the wood is dried spalted birch. These pieces have been drying in my shop for years now, and are very stable, they won’t shrink or expand much and they are pretty nice pieces with very cool figure and grain.

Once the basic carving is complete, I added color to the wood with some black, yellow, and green dyes: 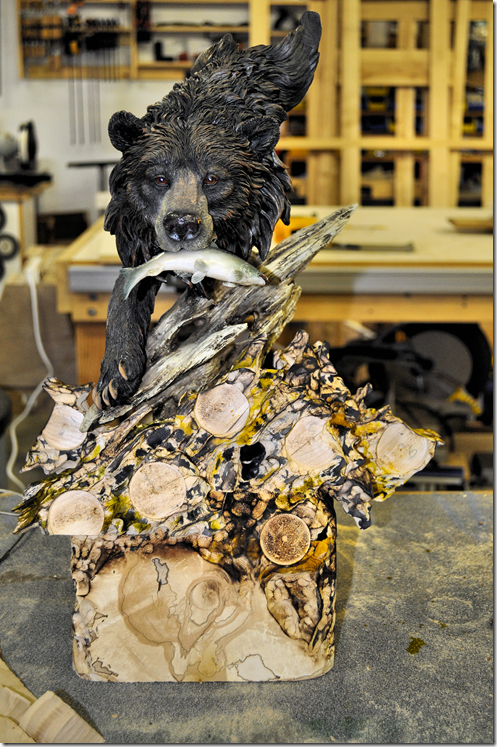 It does, doesn’t it?

Next the wood is darkened with a torch: 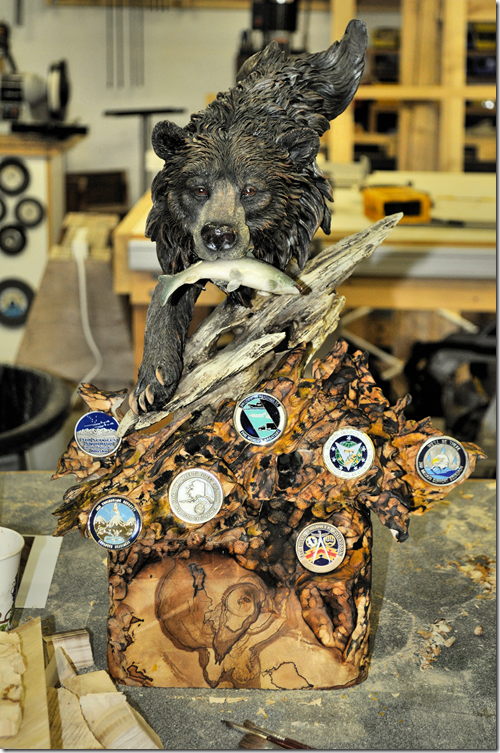 I know, I know – Aaaaugh! you’re just making it worse!

I know what I’m doing.

I lightened things up with the final carving and finish sanding, leaving behind just enough of the color to provide contrast, interest, and help blend the base into the original piece: 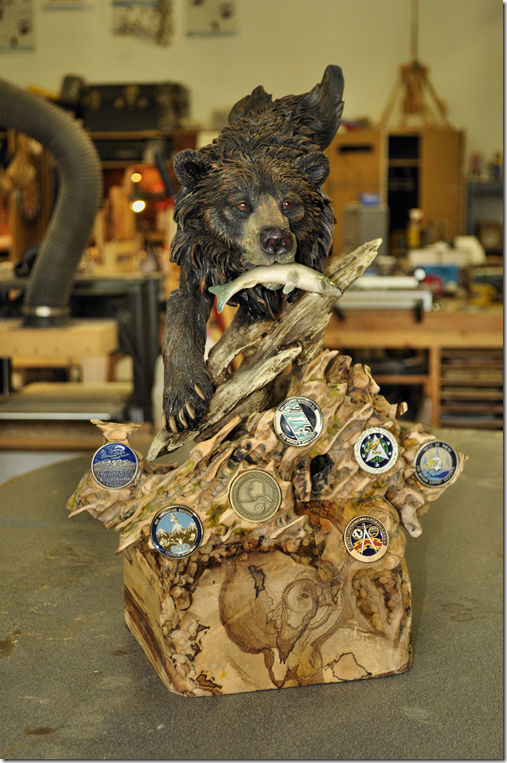 Told you I knew what I was doing, didn’t I?

And finally the base is coated in multiple applications of a tough satin finish, which gives it the appearance of being wet without being too shiny: 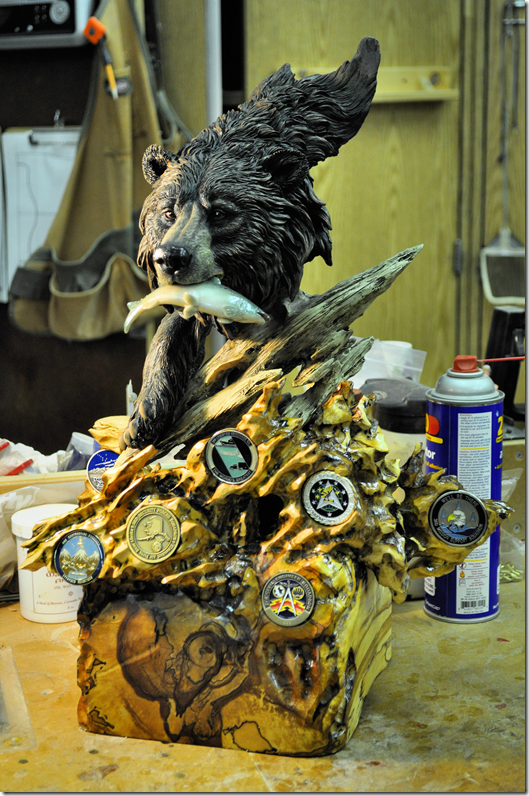 The coins and the bear are glued permanently into place and the finished product matches the image in my head pretty much right down to the T. That big empty space in the bottom left is where a brass plaque will go with the commander’s name and other details commemorating his service here in Alaska.

I’m pretty happy with this piece.

More importantly, the customer was ecstatic with it.