What do you call a man who speaks multiple languages?

What do you call a man who speaks two languages?

What do you call a man who only speaks one language – and poorly at that?

Goddamned right. There’s only one language worth knowing and that’s English American.

Speak it loud, speak it proud.

Speak it really slowly so that that natives will understand.

Can you believe it?

Of all the languages that are not the biblically musical angelic language of Heaven, i.e. English American, Romney chose French. The language of beret wearing socialist surrender monkeys. The Romans who killed Jesus? They were speaking French, that’s a fact and you can look it up on the internet. While you’re at it, look up French in the dictionary, there’s a picture of Adolf Hitler French kissing Chairman Mao.  It’s totally true.

And Mittens croaks like a froggy Frog eating a little gay croissant.

French is probably the language of the Anti-Christ himself – well when he’s not speaking Chinese that is.

See, it turns out that during his college years back in the socialist hippy 60’s, Mitt Romney spent two years in France as a Mormon Missionary. Two years! And get this, instead of proudly wearing a huge cowboy hat and a Chinese made T-shirt with a picture of US Marines eating actual French babies covered in ketchup, and instead of demanding in a really loud voice that all Frenchmen address him in God’s English American while serving extra double bacon cheeseburgers as is the inalienable right of all Americans abroad, Mitt actually learned French and actually conversed with Frenchy French people in French!

Probably while eating French Toast with a side of French Fries dipped in French Dressing while wearing a French Tickler!

What real American would do such a thing?

And would you really want him in the White House?

I mean, honestly, what kind of American President would speak French?

Besides George Washington, Thomas Jefferson, John Adams, James Madison, James Monroe, John Quincy Adams, William Henry Harrison, Teddy Roosevelt, and Franklin Roosevelt.  Turns out Ben Franklin spoke French too, he wasn’t the president, but his face is on our money so it’s pretty much the same exact thing.  Ok, so besides those anti-American Frenchy-loving socialist traitors, what kind of President would speak French?  Did Reagan speak French? I don’t think so because Ronald Reagan was as American as the Statue of Liberty! You damned right he was.  Did George W. Bush speak French? Hell, he could barely speak English American (Texan being his native tongue), but darn it he tried and that’s what matters.

You know who else speaks French? 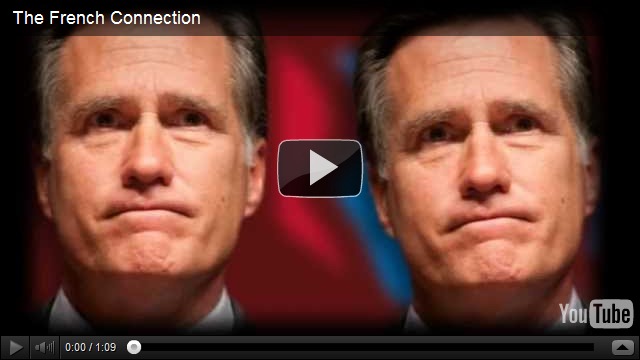 And he speaks French too…

Mitt couldn’t have a couple of bastard children out of wedlock with his undocumented nanny, or a couple of extramarital affairs, or a history of ethics violations, or a conviction for snorting cocaine out of a gay prostitute’s shaved ass crack in a public restroom, or claimed a personal endorsement from Jedi Jebus, or have put out a bunch of racist and bigoted newsletters, or consulted for the very organizations what destroyed our economy, or even have a couple of pictures from his college days sitting on a Kegerator smoking a doobie and wearing a Party Naked T-shirt with the sleeves ripped off like a real patriotic conservative American hero of Patriotic America. Mitt hasn’t even molested one Congressional Page! Oh, no. No, Mitt has to go and learn French.

Why, I bet he listens to the Dixie Chicks!

Mitt Romney is the kind of guy who would have an autographed poster of Anthony Weiner tacked up on the wall in his garage!

Oh you think that’s going too far, do you?  He speaks French! French! He’s bilingual! And bilingual sounds a lot like bisexual! Which is only about one slobbery French man kiss away from just being out and out a flaming rainbow colored sparkly homosexual!

He speaks French, just like John Kerry!  John friggin’ Kerry. What’s next? Are we going to find out Romney was awarded a Silver Star and a couple of Purple Hearts? Who the hell would want a guy like that as President.  Honestly, you’re talking about somebody that isn’t even smart enough to arrange something as simple as a draft deferment for patriotic conservatism. Now, how would a Commander in Chief like that have the fortitude to be able to send other people’s kids off to die in a foreign land? Seriously. Think about it.

In the name of Fulminous Angry Bearded Capitalist Jesus, what else is a man like Mittens capable of?

Imagine a President who believes in that science crap!  Why he might believe that the earth is more than 6000 years old! You ever talk to somebody who knows math and science and stuff?  First thing they do is start in with all that totally unsupported gibberish about how it would have been impossible for Noah to have brontosaurs on the Ark while the Deluge was creating the Grand Canyon. They’ve got all those equations and radioactive decay things and fossils and stuff  that supposedly shows that the Earth isn’t the center of the universe like it says in the Bible.  People like this think they’re smart because they know math, but they don’t even know what the word “theory” means! Honestly, people like this would believe anything. Why, why what if Mitt Romney believes in Global Climate Change?  Holy Mackerel!

I heard that Romney once gave a homeless illegal alien a sandwich!

That’s right. Shocking, I know. Just gave a hobo a sandwich. Didn’t make him earn it. Didn’t tell him to get a job and stop dragging down America. Didn’t tell him to go back to Mexico.  Didn’t force the man into indentured servitude on his family’s Texas ranch where the filthy bum could learn about American capitalism from the example of his betters.  No, just gave the man a big old socialist sandwich. Then, of course, he probably gave the man healthcare too! And a voucher for a free abortion!

Honestly, where does this end?

He speaks French, there’s no telling where that leads – honestly what if it turns out Romney believes that the Constitution applies to everybody, even gay people?

French is the gateway drug to liberalism, Folks, mark my words!

If Romney was a real Conservative, he’d learn to speak a good capitalist language.

And you thought I was crazy.

Instead, it turns out that I am most insightful blogger on the net.

Look here, it’s Romneism! Romney is redistributing the wealth!  Just out and out socialism, right there. Is this what we can expect from a Romney presidency?

I’m Stonekettle Station, and I totally approve this message.