The title says it all.

Note: on our first Delta flight out of Anchorage, the general consensus was that Delta’s lateness was either somehow Barack Obama’s fault – or it should be. After we’d taken off (an hour late due to some kind of “maintenance issue”) and had finally achieved cruising altitude, the pilot, Captain Todd, came on the horn and sort of cheerfully apologized for his tardiness. Sorry about the delay folks and just so you know we’re pushing into a “headwind” so you probably shouldn’t get your hopes up when it comes to making those connections and thanks for flying Delta!” A bunch of unshaven types who smelled strongly of fish, campfire smoke, Viagra, Jack Daniels, and eau de midlife crisis offered up the following in loud outraged tones, “Fuck your apology! We all know what’s going on here! Hey, maybe Obama should take over the airlines next and give everybody universal air travel for free! That ought to fix it!” The shouted suggestions went downhill from there. Oh how I love Alaska tourists, the Palin Groupies are especially entertaining.

I will say that, given the choice, Detroit is a better airport for track and field events. There are less obstacles and everything is laid out in a straight line. If you have to sprint, do it in Detroit, that’s what I’m saying. Also, if you fly Delta, you might want to join a gym.

3) Obnoxious flight crews. Did Delta’s flight attendants just lose a union negotiation or something? Because they are universally a bitter, surely, humorless bunch. It’s as if Delta aircraft are crewed exclusively by John McCain’s former presidential election committee.

4) Unbelievably overpriced food items.  It’s possible that the flight crews’ desultory attitudes stem from the fact that Delta has gone cashless in the cabin.  Flight attendants are now required to use a wireless electronic widget to take credit card transfers from passengers instead of cash.  I suspect this cuts into their take home income considerably.  We’re all used to $5 for a can of warm Lite beer from some discount brewery in Milwaukee that specializes in converting sewage treatment planet effluvium into ballpark refreshments, but now Delta is charging $8 for a “personal” sized can of Pringles, $8 for a bag of M&M’s (no, I’m not kidding), and $12 for one of those extra special airline sandwiches.  You can get better food at better prices at the movie theater. 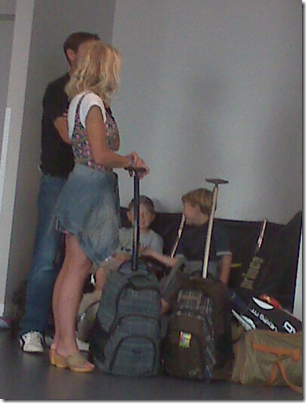 It’s hard to make out, but you’re looking at the King, Queen, and the Royal Princes of Douchebagdom. This idiot had to be in his late 40’s. His trophy wife, which I’m guessing was either a stripper or a paid employee of Donald Trump or both, was wearing a tiny, tiny scrap of cloth under that jacket around her waist.  She apparently thought it was a miniskirt, but only in the Kit Kat Klub or a Republican Fund Raiser would that thong be considered appropriate covering for her nether regions. Let’s just say that when she periodically removed and retied that jacket, you could tell her religion – which I’m guessing was Hare Krisna, though they usually shave their heads and not their, uh, never mind.  Also? Really cute tattoo. She must be very popular at the local PTA meetings.  The kids were exactly as you’d expect, loud, obnoxious, and unrestrained in any fashion whatsoever. Note the pile of carry-on luggage. Four huge backpacks. Four giant bags. Four tennis racket bags (Nothing says douche bag like a tennis racket bag, folks, just sayin). Two giant poster tubes. A huge camera bag.  And two miniature poodles, which roamed cheerfully unfettered around the concourse at the Gerry Ford International Airport, even venturing into the men’s room, the entrance of which this band of idiots was blocking. These people took up two entire luggage bins. But, you know, next to crying babies, I really enjoy a good background of fighting children and barking poodles. Yes.

Have I mentioned how much I hate air travel? Have I?

After I have food, coffee, and a hot shower.