Choose to be optimistic. It feels better.
– Dalai Lama

I remind you this morning that as terrible as things appear to be, it's important to not let this feeling of pervasive doom overwhelm you.

Yes, yes, I know. It feels like the end of the world out there a lot lately.

And no, it's not that easy to remain optimistic or shake this sense of depression. I never said it was.

But you need to do it anyway.

Not just for yourself.

Not just for those you care about.

But for all of civilization. For the future.

I interact with something on the order of half a million people every day, and I'm increasingly seeing a rising sense of dread. I feel like I'm drowning in it some days.

And why not? Dread, doom, gloom, horror, terror, pessimism, these are the things that sell. That's what make you the money.

Rage, that's what gets you clicks and likes and that -- that terrible popularity -- is the real currency of our modern world.

Hate sells, that's where the profits are -- and the prophets.

Trepidation, fear, anxiety, those are what put asses in seats. That's why religion and politics are so popular. Be afraid. That's the message of both, be afraid, be afraid, fear God, fear the the Commies, fear the Socialists, fear the fascists, fear immigrants and gay people and trans kids and vaccines and don't forget to put your money in the plate.

Folks, the world is always going to hell.

Social media makes it worse because we tend to see the things we want to see, doom-scrolling it's called, and we select for it. We go looking for the things that make us afraid, that make us feel this sense of doom and dread and fear.

This isn't new, of course. Religion has done it for millennia. Look at the Christian Bible. That second part, the whole second half of the book, it's about hope, right? About being a better person and making the world a better place. But you drive around my little Southern Town, and every alleged Christian church has a sign out front and it's all doom and dread and fear and Hell. The sign never says "Do upon to others as you would have them do unto you." It's never "feed the hungry, clothe the poor, heal the sick." It's never any of the kind, optimistic words their prophet allegedly said. No, it's always fear and wrath and the threats of a small and miserable god. Inside, it's the same, fire and brimstone and damnation and what kind of moral and loving god has to threaten his followers with eternal torture?

But without that fear, no one shows up.

There's no profit in kindness and optimism.

It's the same with politics. Any politician who pushes a message of hope and optimism, fuck that guy. We want anger and rage and ... well, yeah, just look around. I post a thread about Nazis, something that took me ten minutes to whip out, I get ten thousand likes and retweets and shares. But I post a picture of nature, a bee in flight for example, an image that is the culmination of literally years of effort and experience and skill, the pinnacle of the state of the art, I get five comments and one of them is something about how it reminds the commenter of Donald Trump.

I'm not complaining, I'm simply pointing out that when we moan about how everything is terrible, it's often because we are deliberately ignoring the things that aren't.

I see this every day. Americans drive $70,000 trucks, smoke $200 worth of cigarettes each month, consume more calories in day than half the world gets in a week, watch 900 channels of cable TV, and bitch endlessly about how terrible they have it -- how they're just like the Jews being herded into the gas chambers, how they're oppressed worse than the slaves, how their privileged lives are just the worse thing ever. And they feel this way because the man in the pulpit, the man on the TV, the man they voted for tells them how they are victims, how they're being oppressed, how terrible they have it every damn day.

You know, it's easy to think everything is terrible and getting more terrible when you spend all day looking at terrible things.

There are a lot of loud shitty people in the world, and the Information Age gives them all a platform to shout their rotten halitosis in your face all day.

Look, I'm not saying you should dismiss what's happening in the world. Not at all.

I'm not saying you should ignore all those terrible things, the hate, the injustice, the misery.

But take the time to look for the good things too. For your own sake.

Block the haters, fight only on your terms, and take a break when you need it.

Here's a picture of a bee. 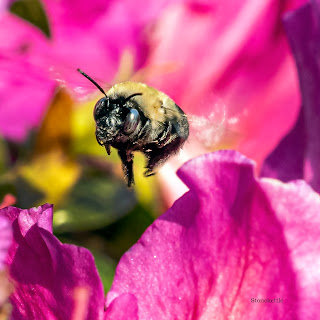 I'm taking the Mini and my wife and going to drive the beach road.