Into the Valley of Death, Again

Not a failure says President Trump. 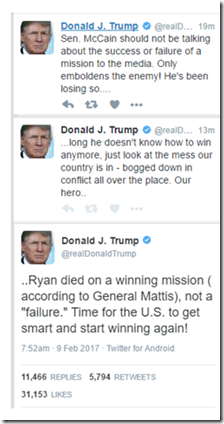 Or rather not a “failure.”

Given the nature of the situation, perhaps winning should be in Doctor Evil quotes instead of failure but then I’d be digressing by the fourth line and let’s not do that.

So, Our hero Ryan died on a winning mission.

- Despite strict operational security, covert insertion, and months of intelligence work, the enemy was tipped off to the pending attack. Exactly how isn't known, could have been barking dogs, a crashed recon drone, intercept of communications from Yemeni commandos accompanying the mission, or just plain bad luck.

- A large number of civilian non-combatants were killed, including an 8-year-old girl

Note: reports are that armed women were part of the firefight, making them legitimate targets. I'm not saying they weren't. But even the Pentagon admits a number of non-combatants were killed and has opened an investigation into those casualties

Also Note: Once the advantage of surprise was lost and the firefight began, air support was called in because there were no other options. At that point, given the situation, it would be nearly impossible for there not to be collateral damage and civilian casualties. Sometimes there are no good options, that’s just how it is.

- Out of the 14 enemy combatants killed, three were actual AQAP leaders, but the primary objective got away (or was never there) and is now openly mocking President Trump and publicly calling him "The White House's new fool."

- And anti-US sentiment in the region, already high, is now rising significantly.

In the aftermath – depending on analysis of captured materials and information systems – it is possible that the mission could be considered an intelligence success. It's too early to tell and likely the results of that analysis, whatever they are, will be classified for OPSEC purposes and even if they are significant, the public will never know. That is the nature of this sort of thing. Failures are public, successes are unacknowledged.

Now, before we go any further let's get something out of the way:

Sometimes missions go to shit and there is not one damned thing you can do about it.

The God of War is fickle and perverse and his prophet is Murphy.

All the planning, all the assets, all the training, all the intelligence work, despite all of it, sometimes there's a barking dog and it all just goes sideways. And then the only thing you can do is call in the gunships and let God sort it out.

That is the nature of war.

And so my criticism is not, REPEAT NOT, directed at the military.

I know these people. I helped plan and execute missions like this one. They would not have gone forward if they weren’t reasonably confident of success, no matter who is sitting in the White House. The people out there on the pointy end of the stick are doing the very best they can with what they have at the moment.

Could things have been done differently? I don’t know, I wasn’t there. I’m not questioning the commanders who made the decision to go forward or the SEALs who executed the mission. That’s not my point. Unfortunately the job has to be done and theirs is not to question why, it's to do or die and ride into the valley of death when commanded. And that is why they are the very best, the most highly trained, with the best equipment and support we can give them.

But there is always a risk that the mission will go bad.

In the worst way possible.

Is that Donald Trump’s fault?

He’s the President. He’s the Commander in Chief. The buck stops right in front of his desk. Fair or not, that’s how it is. That is what he swore to when he took the oath of office. That is what the Constitution demands of him. He and he alone is responsible. If the mission is a success he gets to claim it on national TV. And if it goes bad, it’s all his fault. That’s the job. And a real president, a real leader, steps up and takes responsibility either way, most especially when it all goes to shit.

But America does not begin with the President.

It begins with us, the citizens of this nation.

And while it may be the military’s duty to do or die, it is for us to question why.

Chief Owens died in our name, so it is for us to demand a thorough and dispassionate accounting from our leaders.

A few years back, when four men died in Benghazi, conservatives didn't need reminding of this duty – though they then perverted their responsibility into a political vendetta.

And since the Benghazi comparisons are flying on both sides today, allow me to remind you all that at no time did the previous administration attempt to portray that debacle as a victory or anything other than failure.

And that's my point, right there.

The Yemen raid, whatever the eventual intelligence value, can hardly be called a "winning mission."

To do so is an insult to every thinking American and an abdication of the responsibility which comes with the office of President.

Worse, far worse, this morning the Administration is attempting to silence accountability by saying that any criticism is unpatriotic and a "disservice to Chief Owens."

That is some fascist bullshit, right there.

That is the tactic of every petty dictator and tin pot tyrant.

It is the duty of free citizens to question their leadership.

If, as Sean Spicer this morning claimed, the mission was a success, a true success despite the terrible cost, then it is the responsibility of the administration to prove that beyond a shadow of a doubt to the public.

Otherwise what Spicer is saying is that every Republican who questioned Obama in the wake of Benghazi must be considered equally unpatriotic and un-American.

More, Trump himself claims to have opposed the war in Iraq and Afghanistan right from the start.

Donald Trump has repeatedly claimed to have been a vocal critic and to have never supported the idea of war in the wake of 911.

And he has repeatedly criticized the war and our role in it for the entirety of his campaign, denouncing both wars as failures – this is in point of fact the very cornerstone of his rhetoric.

So when White House Press Secretary Sean Spicer demands the critics of the Yemen raid apologize to Trump out of some supposed respect for a fallen SEAL, then we must demand Trump himself apologize for his critical and disparaging remarks about the war in deference to all of those Americans who died in Iraq and Afghanistan.

No, I suppose not.

He’s just not that kind of leader, is he?

In fact, this morning Trump took to Twitter to criticize Senator John McCain – a man who arguably knows a bit more than Donald Trump about military missions gone bad – for criticizing the Yemen Raid.

Criticism of a botched military operation emboldens the enemy.

No, really think about that and what such a statement from a president really means for liberty.

And yet – and yet – despite repeated attacks, McCain himself and those like him in Congress continue to endorse this president and his decisions. And they do so, those Senators and Congressmen, because they are terrified that if they don't then they themselves will become casualties of this war.

And staying in power, no matter how diminished, no matter how far they have to crawl on their bellies, is more important to them than their duty to the nation.

And that should sound the alarm for every American.

Because that is how republics die.