Here we are yet again.

Another nut with a gun and score to settle.

And social media has again gone mad with rage and rumor and accusations of blame like enraged monkeys with fangs bared flinging fistfuls of shit at each other.

Yesterday, I cautioned my audience:

Facebook: You'll note that at the moment the ONLY thing you know for certain is that the shooting is proof positive of whatever political or religious position you hold, no matter who you are or what that position might be. And tomorrow when the facts begin to emerge, a whole bunch of people are going to look either stupid for what they've said today or they're going to bull it out and look like assholes - or both. 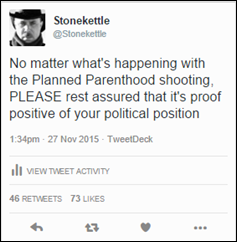 Frankly,  I don't think I'm out of line to say I Told You So.

It's now been a bit more than a day since a nut with a gun barricaded himself inside a Colorado Planned Parenthood clinic and started shooting people.

Here's what you actually know as I write this: Nothing.

Here's what you actually know about the shooter today: Nothing.

Here's what you actually know about his motivation: Nothing.

Here’s what you actually know about his political and religious positions: Nothing.

In fact, you don’t even actually know if Planned Parenthood was his intended target, or just a target of opportunity.

And yet, exactly as I said, despite the fact that you actually know nothing, most of you are firmly convinced that this guy is proof positive of whatever political position you hold, Left or Right or something on the howling libertarian fringe. 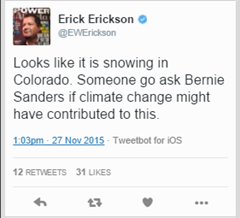 Shooter, terrorist, madman, murderer, hero, whatever you choose to call him, his ultimate utility to our society is as gleeful confirmation of our own beliefs and as a condemnation of those we oppose.

While the shooter was still barricaded in Planned Parenthood, actor and raging conservative extraordinaire Adam Baldwin told me that the shooter was a transgendered leftist member of the Marxist "Socialist Workers Front." So AH HAH, in your face liberal scum! 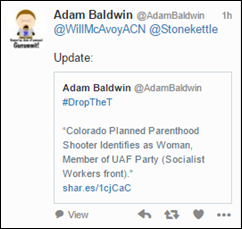 As proof of his position, Baldwin linked to a website called The Gateway Pundit, a rightwing political blog run by a member of the Tea Party.  The Gateway Pundit published what it alleged to be court and voter records which showed the shooter to be female, despite rather obvious male characteristics in the attached booking photo with the caption, “That’s weird.”

The obvious implication being the shooter was the T in LGBT, and therefore a “lefty” since by definition in Adam Baldwin’s mind all Lesbian, Gay, Bisexual, and Transgendered people are ipso facto liberals.

The Pundit post ended with “[the shooter] also lists his party as UAF” – though the article provides no source or proof of this affiliation other than a vague reference to “voter records.”

Other sites gleefully latched onto this supposed “fact” and ran with it, identifying “UAF” as the political movement “Unite Against Fascism” which some allege to be a Marxist leaning movement.

As of this morning, it appears today Baldwin deleted his original tweet – at least I can’t access it despite being able to see all his other messages on Twitter.

The Gateway Pundit stands by its post – as one would expect from a source that crows about its award for “Breitbart Accuracy in Journalism.”

Baldwin’s partisan confirmation bias and public rumor mongering sets the tone for this entire miserable affair (though to be honest, given his track record on Twitter, I’m somewhat surprised at his mild tone when talking to me – especially since the conversation began with me calling him a “dimwitted goon,” which in retrospect makes me somewhat of an ass).

Planned Parenthood meanwhile claims the shooter was mumbling about “no more baby parts” and was violently opposed to abortion:

But again, what you’re looking at here is opinion.

And his alleged statement about “baby parts” is as yet unconfirmed and at best hearsay.

Mike Huckabee called it a case of “domestic terrorism.”

Pro-Life LifeNews condemned Hillary Clinton for “exploiting” the shooting after Clinton issued a series of comments on Twitter in support of Planned Parenthood. LifeNews then predictably goes on to exploit the shooting in order to push their pro-life agenda. 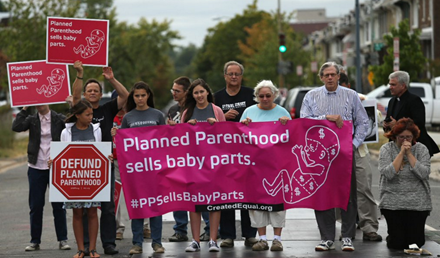 Glen Beck’s The Blaze with grim predictability managed to tie Clinton, the shooting, abortion, and Black Lives Matter all up together and dismounted in triumph apparently defending the lives of black children which the same outfit commonly refers to as “thugs” and against which its readers loudly feel they need to be armed. 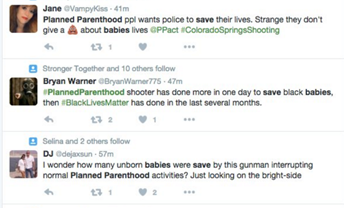 The Shooter’s neighbors called him weird and angry and disturbed.

The word “loner” is being bandied about on both sides of the political divide,  often with a raised eyebrow and a knowing look. Ah, of course, a disturbed loner with mental problems. Sure. Sure.

The word “terrorism” has been thrown out on both sides of the political divide, though who the actual terrorist is when a bearded lunatic kills a cop while shooting up a controversial medical facility is open to interpretation. 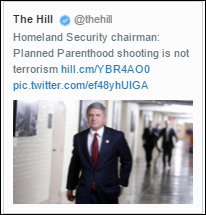 A number of people have noted that despite killing a cop and actively shooting at the police for five hours, the white shooter was calmly taken  into custody and walked out of the building apparently uninjured.  And somehow, so far, he hasn’t died in custody. And what exactly  does that say about our society in light of other recent events where people of color weren’t nearly so lucky – despite, you know, not having killed a cop. 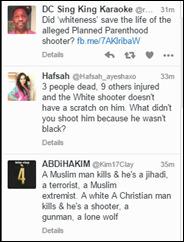 And of course, there’s the perennial American Gun Argument: 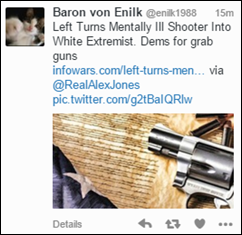 In the end, I suppose when it all shakes out it’s possible that the shooter will turn out to be an introverted transgendered pro-life Tea-Party Marxist Muslim extremist, but at the moment what you actually know about him (or her) is nothing.

And yet, exactly as I said, despite the fact that you actually know nothing, most of you are firmly convinced that this guy is proof positive of whatever political position you hold, Left or Right or somewhere out on the howling fringe.

You know, when I was growing up, it was the atom bomb.

We were sure, sooner or later, the world would end in nuclear fire. We built shelters we knew would be no use. We built great engines of war which we hoped would defend us from our enemies but which we secretly knew would only ensure no shred of civilization survived the holocaust – we even had a name for it, we called it MAD. We signed treaties and prayed to the gods and fearfully watched the skies for the first sign of the falling warheads.

Somehow, by luck mostly, we survived.

Somehow, the Doomsday Clock was reset, the hands moved away from midnight instead of ticking down to our doom.

Now, when the learned men speak of that dark time, they sigh and say, well, you know, civilization dodged the bullet.

And yet, looking back, I wonder.

I wonder if nuclear Armageddon was half the threat to civilization the internet and the 24-hour news cycle are.

Sooner or later, if we are to survive, we human beings of the Information Age are either going to have to evolve filters and critical thinking skills, both mentally and technologically, as a society or watch our civilization fall into utter chaos and ruin around us.

As the man said, some people just want to watch the world burn.

The simple obvious truth of the matter is that we, most of us, are not yet equipped to deal with the deluge of information which floods our senses every single day. Our social systems, our mental filters, our sense of propriety, our ability to judge truth and falsehood, right and wrong, are all overwhelmed. All of our very worst traits, confirmation bias, fear, hate, bigotry, ignorance, stupidity, selfishness are exaggerated and amplified and all of our best traits, love, understanding, empathy, patience, courage, are lost in the fire.

Like frightened chimps we bare our fangs, screeching in rage, and fling shit at each other.

And that, that  right there, is the whole damned problem.

Email ThisBlogThis!Share to TwitterShare to FacebookShare to Pinterest
Labels: things about politics, Things I'm thinking about