The previous post regarding outlaw vaginas has generated the expected hate mail.

As I’ve mentioned in the Hate Mail From Jesus post (which if you haven’t read it, you really should because it may save you wasted motion in the future), sending me hate mail is generally a futile exercise.

Not that that actually prevents silly people from sending me angry letters.

I typically don’t read this crap, mostly because I really don’t give a fig if you hate me or not. I was in the military for more than two decades and I’ve been writing about politics here on Stonekettle Station for going on five years now, I’ve been hated on by professionals.  Frankly, my hate mail is generally predictable and not particularly imaginative.  I think we can all safely assume that I’ve been fully informed by my manifold critics that if the Rapture ever does finally happen I’ll be left behind to boogie with the devil and the other sinners. Barring square-dancing with Satan, if the gibbering Jesus monkeys do manage to “take back ‘Merica for real ‘Mericans” before the End Times, I will no doubt be shot out of hand or shipped off to the gulag with the other undesirables in the first purge.

I’m good with either of these scenarios and I don’t spend much time dwelling on it.

However, that said, some folks really feel the need to keep telling me about how offended their deity was by something I wrote (why their deity doesn’t do something about it himself has never been adequately explained. But I digress).  I do find a certain degree of amusement in this, and so I do upon occasion read a selected sample of my correspondence – especially if the hate seems out of the ordinary.

Today I started getting messages from the faithful accusing me of extra special deviltry.

Something about me tricking their kids into reading about OMG! Vaginas! or OMG! Homosexuals! instead of Jesus.

I went back and checked yesterday’s post just in case I had accidently titled it “Hey Kids, Let’s Read About Jesus!”  It could happen. I’m getting old and according to one keen letter writer in the Hate Mail From Jesus post, war must have messed up my ”little atheist monkey brain” so, you know, better check. But nope, there it was big as life and in your face, VAGINA! In fact, I used the word twice in the title. I really couldn’t see how anybody could think that “When Vaginas Are Outlawed, Only Outlaws Will Have Vaginas!” was a post about Jesus for kids.  I tried squinting my eyes to see if I could maybe make VAGINA look like JESUS (and you know people have seen him in stranger places. Also certain folks tend to shout out one when in the presence of the other) but not even a double shot of Bushmills could change water into wine if you get what I’m saying here.  Besides, if you’re letting your kids drink Irish whiskey, you probably aren’t the kind of parent who gives much of a shit if they surf the internet for vaginas.

Well, OK. So I checked the software that tracks who’s looking at what on my blog.

There were a lot of people looking at vaginas.

But wait, what’s this?

It seems I was getting traffic from a website called, wait for it, waaaaaaaaaaaaiiiiit for it, Stories of the Bible for Kids.

Stories of the bible for kids?

That’s when I began to giggle uncontrollably. 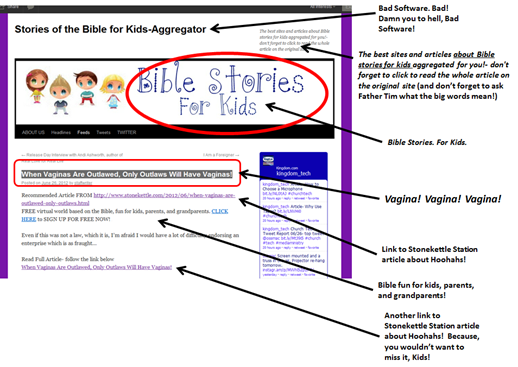 You can click on the image for a bigger and more readable version.

You know, I call Shenanigans. These people are all over my ass about use of the word vagina, but I’ve read the Bible – seems I remember something about a certain “valley of death” in the same sentence with finding comfort in your rod and staff.

How come Jesus can make double entendres and I can’t?

Hate mail, I get it.