You didn’t get a blog post yesterday because I spent Veterans Day in Hatchers Pass.

Hatchers Pass is one of our favorite places, we spend a lot of time up there.

Hatchers Pass, for those of you not familiar with Alaska, is a BLM area near Wasilla.  It’s on the old gold rush and supply trail that once snaked its way from Seward to Fairbanks.  Before the modern Glenn Highway the pass was the quickest way north from Anchorage.  Nowadays, the road over the top and through the actual pass itself is closed in the winter, buried under yards of snow and used only by hearty souls on snow machines and skis.

In the summer the pass is a great place for hiking, gold panning, and exploring.

In the winter, it’s a popular place for snowboarders and skiers.

For years, developers have been trying to get their grubby hands on the place, so they can charge us to do what we now do for free.  There’s a certain mindset that just cannot stand the fact that people are enjoying themselves without having to pay for it.  So far, any attempt at development has been unsuccessful and that suits us just fine.

I don’t snowboard. I’m in enough pain most of the time without tempting fate any further.  My son does the downhill stuff, I mostly just take pictures.

The skiers, sledders, shredders, and boarders all start at the bottom of the pass.  Since there’s no lift, they hitch rides up the mountain from passing vehicles.  They line up like brightly colored birds along the guardrail and wait for a ride. Nobody ever has to wait for long. Since we didn’t bring the dog this time, we gave rides to as many kids as we could pack into the back of the truck.

It’s several miles to the top.  There are a number of trails down the mountain, but most of the snowboarders like to start at the very top, mile 16 on the pass road.

They gear up and head off down the mountain.  This is a shot of my son strapping on his helmet (this picture was actually taken last weekend and was posted on my Facebook page. But I like it, so I’m reposting it here). 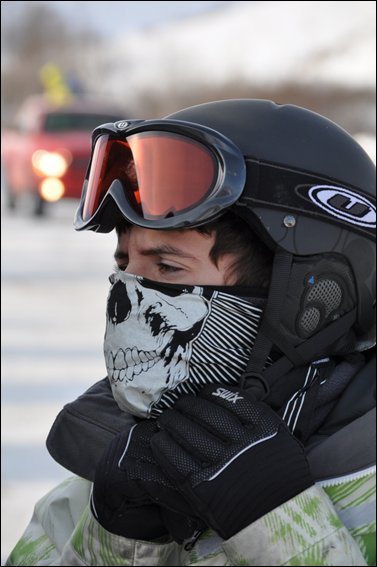 Here’s a panorama taken from the 16 Mile parking area.  This is seven shots stitched together using Corel’s Paintshop Photo Pro.  Clicking on the image will take you to a bigger version in my public Picasa album. If you look really carefully, you can see my house down there on the flats. It’s that little dot.

Once you drop off your passengers, you drive on back down the mountain to pick them up and do it all over again. After a day of this, you have one very tired kid, so, you know, it’s totally worth the half tank of gas.

I hiked up the trail at the bottom of the run and snapped a few pictures while trying to avoid getting run over.  I thought the colors made a great contrast against the white snow. And that dog was having a blast, chasing its owner down the mountain and barking like mad. The dog was plenty smart and experienced enough to avoid getting run over.  In typical Alaskan fashion there are actually a lot of dogs on the slope, all having fun (and we counted at least two moose).  Just another reason to avoid development, can you imagine your local ski lodge allowing dogs on the slope? 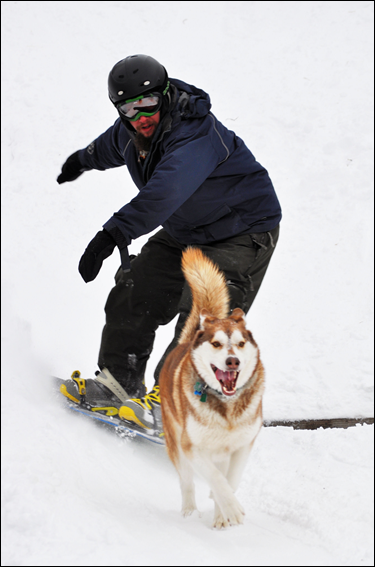 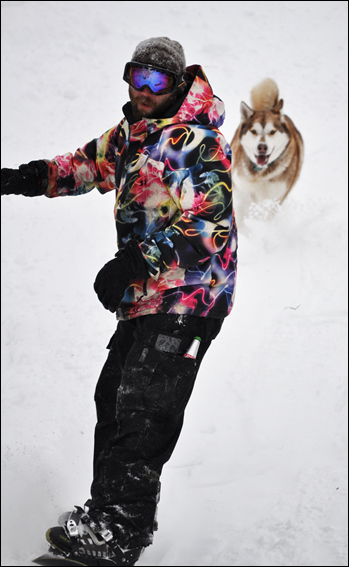 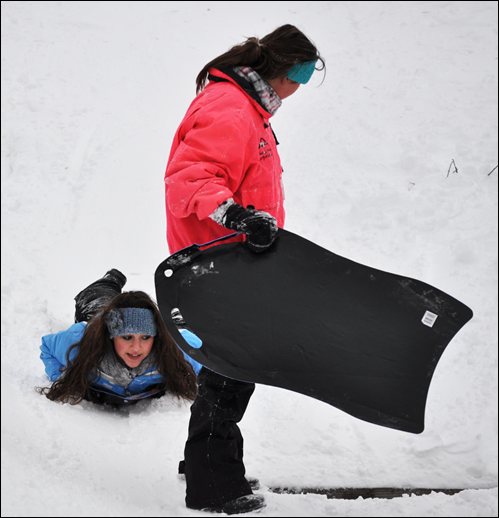 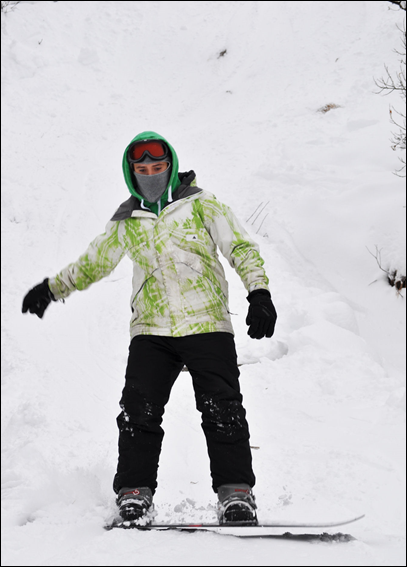 I thought to myself as I took the pictures, man, I sure wish I could do that. But then I realized that to board Hatchers Pass you need skill, experience, and an athlete's physique.  I would have thought about it more, but at that very moment, I had to leap out of the way of a little pink blur which whooshed past me in an icy spray of mocking girlish laughter.  She waved and grinned like a tiny maniac as she whistled past, ponytails flying.

I figure she was about eight.