I’ve had all day to think about this event.

And the more I do, the more enraged I get.

For starters if it had been I who posted this hit list: 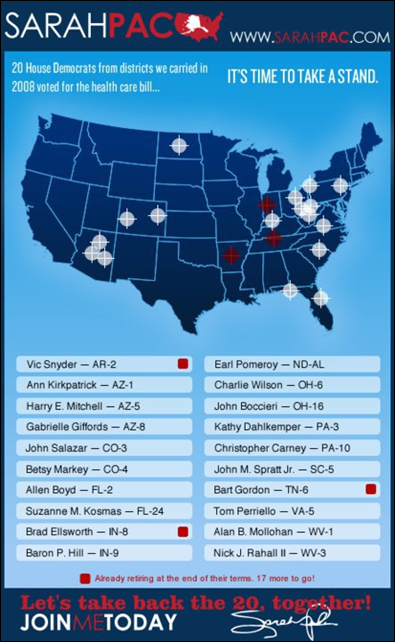 here on Stonekettle Station prior to today, I’d be sitting in a small room right now answering questions from humorless men in dark suits.

If I had spent the last two years advocating the assassination of the President, Congressmen, Senators, and Judges that I don’t agree with, if I had used the exact words Glenn Beck, Rush Limbaugh, Anne Coulter, John Boehner, Sarah Palin, Sean Hannity, Bill O’Reily, Michelle Bachman, and the rest of these traitorous scumbags who purport to be Americans use, if that was my signature on the hit list above, I’d be in custody right now.

If I had encouraged my followers to take up arms against the government, if it had been me who called for the military to mutiny against the Commander in Chief, if it had been me advocating for a new civil war, if I was any random high school kid in America and I had published a hit list like the one above, the one that has graced Sarah Palin’s website for the last year, I’d be in jail right now.

Don’t think they don’t know it either, because Palin and Fox and the Tea Party and the rest of these bastards have spent the last eight hours editing their websites to remove any reference to guns and violence and target lists.  Palin couldn’t delete that hit list with its little scope sights fast enough – though she apparently doesn’t understand the concept of cached copies. They know, yes  they do, but they simply have no shame whatsoever – and if you don’t believe me, well, all you have to do is read the comments from the Tea Party under Palin’s hypocritical bullshit on Facebook.

When you agitate for violent solutions, you don’t get to wash your hands of the bloody responsibility when the unhinged take you up on your suggestions.

And the shooter, Jared Loughner, was indeed unhinged. Certainly – at least if the raving paranoid crap he posted on the web is any indicator.  I don’t know that he was either right or left or somewhere careening down the centerline of Bugshit Street, Crazytown, USA.  But I find it typical that because he listed both the Communist Manifesto and Mein Kampf as his favorite reads, the commenters under Fox, Yahoo, and Palin’s Facebook page have decided that he is a “Leftist!”  It doesn’t surprise me in any way whatsoever that none of these drooling idiots seem to realize that Mein Kampf, was written by Adolf Hitler, a fascist, and an extreme rightwing nationalist.  No it doesn’t surprise me at all, it’s just par for the course. It also doesn’t surprise me that Palin has taken no action whatsoever to correct her commenters, ditto Fox, ditto Yahoo, ditto the dittoheads of the Tea Party.

A large number of folks are now apparently creating fake webpages and Facebook accounts purporting to be from Loughner himself in order to “prove” that that shooter was or was not motivated by whatever agenda they’re pushing. That’s going to make the investigation fun.  It sickens me to realize just how many people feel that they have to “win” at all costs, even if they have to fake the evidence – whether it’s the attempted assassination of a US Congresswoman or an autism study.

I think it’s about time we chucked the bullshit and started referring to our country as The United States. Seriously. Because if these stupid sons of bitches keep at it, sooner or later – probably sooner – we’re going to go the way of the dinosaur.

This morning Palin aides are busy defending the bull's-eye imagery and the gun violence statements used by Palin and the Tea Party.  "We never ever, ever intended it to be gun sights," Rebecca Mansour, a senior Palin spokesperson, said. She denounced attempts to tie Palin to the violence as "obscene" and "appalling." We never intended it to be gun sights? Really? Because based on Palin’s “Don’t retreat, reload” rhetoric I’m going to have to drop the bullshit flag on that one.  When you put up a list like the one above and you talk about “taking them out” and you talk about “2nd Amendment Solutions” you don’t get to later claim you weren’t talking about killing people. But her attempt to change the past, even when directly confronted with a hit list, complete with gunsight bull’s-eyes and signed by Sarah Palin herself, is typical of Creationists who dogmatically deny the evidence before them and change the past to suit their nonsense.  Palin’s spokesperson saying “we never, ever, ever intended it to be gunsights” while looking at fucking gunsights is just the second coming of the same old cavalry.

It in the cold light of the morning after, it is my considered opinion that Palin and the rest of these foul violent bastards should be charged as co-conspirators in this event and prosecuted to the fullest degree of the law under the domestic terrorism clause of the Patriot Act.  I think Rupert Murdock should be dragged before a military tribunal at Gitmo to account for the actions of his media empire, and if found guilty should be stripped of his citizenship and deported back to Australia – let them deal with his ass.

Words and actions have consequences, the Tea Party should be held to account for theirs.

Expanding on something I said in the comments section:

This isn’t an abstract, it’s the law.

In the US it is the right of most citizens to own a gun, but they are fully responsible for how it’s used.   If you as a gun owner leave your weapon out where a child or a crazy person can get a hold of it, you’re responsible for the consequences.

If you and your friends get together for a tailgate party and it evolves into riot after your team loses, you are responsible for the broken windows and property damage and the gang rapes – you don’t get to claim that you were just exercising your 1st Amendment right to free assembly.

The same is true of free speech, if you encourage someone to kill another, and they do, you are guilty of conspiracy and solicitation to commit murder – and people are routinely convicted of this nearly every week. Saying “oh, I was just kidding” or “oh, I didn’t really mean it” or “oh, I was just speaking metaphorically” isn’t a defense.

The 1st Amendment isn’t a Get Out of Jail Free card.