There's an Anemone Eating My Head 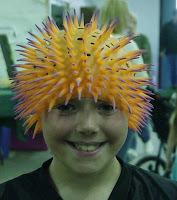 No, that's not a sea anemone eating my son's head, it's a ... well, I'm not sure how to describe what it actually is, now that I think of it. It did cost me $10, and it's made out of some kind of silicone I think, and it was in the little store section of the science shed at the Alaska State Fair and my son just had to have it, but other than that I've got no idea what it is. It was a fun day at the fair, sunny and hot (for us anyway, it was in the 70's and I was roasting), I got my annual buffalo burger and fresh-garlic smothered homemade potato chips, and bought a quart of Chikaloon birch syrup. Toured the craft sheds and watched the Alaskan Wood Turners Association demonstration for a bit.

As always when there is a large crowd, I came away with a couple of observations:

First, when did it become fashionable for women to show buttcrack? Seriously, are a lot of women joining the Plumber's Local or what? Lately it just seems that wherever I look, I've got female asscrack staring me in the face. I don't need this. Ladies, it's not attractive. Really, it's just not. Please, as a public service, pull up your britches, wear a longer shirt, something. Thanks.

Second, my son is an expert on Motocross. I don't know where he got it from. He begged me to take him to see it and I agreed. Now, understand, I have no interest whatsoever in loud noises made by 2-stroke motors and I don't know an 80cc Freestyle from the 125 Supercross Lite but it was a beautiful day and your kid is eleven only once, so what the hell. My wife bailed on us, so I got a beer (MGD. Ugh! Cheap shitty beer in a flimsy plastic cup is just another reason I avoid any event where rednecks gather in large groups) and we settled down in the bleachers to watch a bunch of crazed fools fling themselves around a muddy track and into the sky. After an hour or so came the freestyle demonstration. Holy. Freakin'. Crap! I've done some fairly dangerous things in my life, but these people are insane. They were jumping 30 -40, maybe 50 feet in the air while doing tricks called superman, tailwhip, cordova, and I forget what else. Yeah, yeah, you know all about this stuff, but I don't, and I'm pretty dammed sure I've never taken my son to see it before. And yet, somehow, my kid not only knew what each trick was called, he knew if they were doing it right. He knew when it was time to groom the track, and looked around for the water trucks. He knew the specifics of each racing category. How is this possible? Guess those video games he plays are more realistic than I thought. I'm going to have to pay closer attention.

And third, Stupid. Yep, big ol' stupid, sitting in the bright Alaskan sunshine, right there outside the livestock shed. Female, probably mid to late 50's, wheelchair bound, plugged into two very large personal O2 cylinders via a thin plastic tube under her nose and ... smoking? Smoking? No way. I do a double take. Holy shit, she is smoking. WTF? Hey, let me clue you in on something, Stupid, to wit: Oxygen + ignition source = Whoosh! Flash! Burning-Hair-Smell! Right smack in the middle of a large, dense crowd. Bad, Stupid, bad, no biscuit.