GIVE ME HUNTER BIDEN DICK PICS OR GIVE ME DEATH!
-- Patrick Henry, MAGA, probably 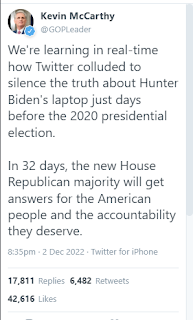 As I noted elsewhere: I feel like the American education system has failed me.

Because I honestly had no idea allowing washed up actor James Woods to post unlimited Hunter Biden dick pics to Twitter was the cornerstone of democracy.

It literally never came up once between kindergarten and a couple of college degrees.

So, I totally didn't know that.

Imagine how embarrassed I am. 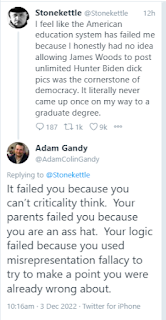 Also, I spent 20 years in the US military. I took the oath as an enlisted man and later as an officer countless times.

That oath comes from the Constitution.

The Constitution. That's as American as it gets, right?

And I totally can't believe the powdered wig wearing idiots who founded this country completely left out the part where the Republic will completely collapse unless we get advice on how to run civilization from self-proclaimed Nazis, White Supremacists, Confederates, seditionists, washed up actors, Incels, and Russian trolls in the town square.

I mean, what the hell, George Washington? 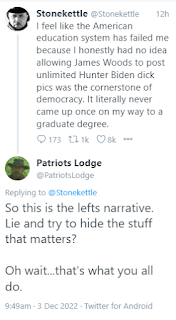 Hide the stuff that matters?

If his wang was that important to democracy, you'd think the Founding Fathers would have put a dong clause in the Constitution, right?

At least mentioned it in passing? Carved it into Mount Rushmore or the Lincoln Memorial or something, right?

Oh, I see. The Lincoln Memorial didn't exist when America was founded by Jesus?

Yeah, and Joe Biden wasn't president when his campaign asked Twitter to abide by their own rules, but that doesn't mean he shouldn't be impeached for abusing the office he wasn't occupying at the time either dammit!

I'm not really a Constitutional expert -- except on the internet, like everyone else. 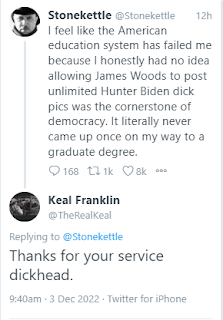 Thanks to you for not serving.

Whatever, look, here's the bottom line: even for a bunch of folks who thought women were livestock and black people were only 3/5s of a human being, it really does seem like a glaring oversight on the part of the Founding Fathers is what I'm saying here. 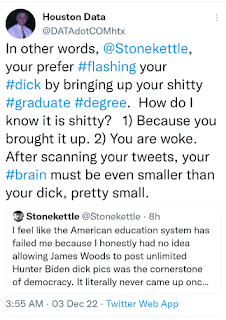 You know, for a group that does nothing but complain about "groomers" these people sure do think about dick a lot.

I hope they eventually find one that makes them happy. 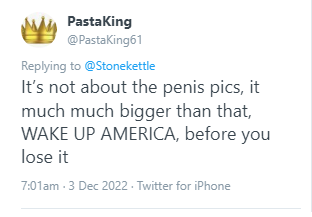 It's not about penis! It's much BIGGER! Wake up before you LOSE IT! 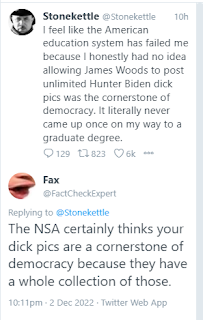 You know, at first I was a little disappointed Republicans took the House in the recent election.

No, no, I was. A little disappointed. A bit.

I gotta be honest: I'm excited Kevin McCarthy is going to be Speaker.

I am. Excited. I really am.

Because I am so looking forward to the House Special Select Committee To Investigate Hunter Biden's Dick Pictures.

I wonder who they'll appoint as "Special Master?"

It'll have to be a real master debater...

Okay, that was a cheap shot, I know. I don't want to debase a debate run by people talking about dicks, how much they love Hitler, and currently supporting a candidate for congress who thinks the most pressing issue of freedom is whether it's better to be a vampire or a werewolf. 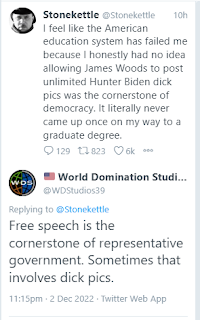 Anyway, I imagine when it comes to investigating dick pictures, the list of Republican "expert witnesses" is going to be pretty extensive.

Kevin McCarthy be like: Okay, settle down! We're putting together a task force to investigate a major threat to National Security. And we're going to be looking at a lot -- a lot -- of pictures of male genitals on the Internet. Now, which one of you, yes, YES, I see you Congressman Gaetz, put your hand down, you too Congressman Jordan, besides those two, who else considers themselves an exper... Whoa, that many huh?

They'll probably have to set aside at least 3 days for Lauren Boebert's testimony alone.

First, they came for the dick pics, and I did not speak out -- because I was too busy watching Tucker Carlson and thinking about Hunter Biden's laptop

Then they came for vaccine deniers spreading misinformation, and I did not speak out -- because I was rage tweeting about Drag Queen Story Hour

Then they came for the election fraud conspiracy theorists, and I did not speak out -- because I was marching in the street with actual Nazis shouting Jews will not replace us and waving a Swastika flag

Then they came for me -- ha ha, just kidding, I'm a white allegedly straight Christian male in America, no one ever comes for me and in fact billionaires like Elon Musk buy social media platforms and give me a place to spew my bile and they call it free speech!