The point is that you just can’t be too greedy.
-- Donald J. Trump

Howard Schultz is running for President.

Everything I've seen from this guy, every word he's spoken, every interview he's given, every poll he's bought, every article he paid someone to write, everything over the last few days tells me just how utterly horrible he'd be as President.

But this, this right here, this is the linchpin of it: 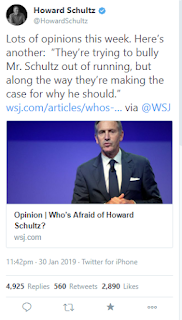 This is exactly what's wrong with Howard Schultz.

And it's the same thing that's wrong with Donald Trump.

Look at this. Look at what Schultz tweeted this morning.

Lots of opinions this week. Here’s another: 'They’re trying to bully Mr. Schultz out of running, but along the way they’re making the case for why he should.'

He thinks he's being bullied.

He thinks he’s a victim. Of bullying. This guy.

He's quoting the conservative press, who thinks he's being bullied.

He thinks he is being bullied because the press asked him some questions.

He thinks he’s being bullied because social media asked him some questions.

He thinks he’s being bullied because his past is being scrutinized.

Most of all he thinks he being bullied because suddenly he's facing criticism that he can’t ignore for the first time in his life.

Listen to me: bullying is what happens when those who have power use that power to brutalize those who do not.

That is not what’s happening to Howard Schultz.

No one is bullying Howard Schultz, I doubt he’s ever been bullied.

He has all the power and now he wants more. And he’s trying to use that power to silence any questions, to bully his critics and his questioners into silence.

Just as rich privileged assholes like Howard Schultz always do.

He wants to be president. President. And so he's getting the scrutiny and the questions every candidate gets. No more, no less. But just like Trump, he thinks he's special and he shouldn't have to face it.

And that's it, right there.

That is what makes Howard Schultz, and his ilk, ultimately unqualified to lead this nation.

He thinks his privilege, his wealth and power, put him above question, above examination, above criticism, above having to be better.

No, he has all the power, all the money, he lives in the big house on the hill and owns every street corner and how dare the peons question him?

He actually thinks he's being bullied because for the first time he has to answer, not the shareholders, but to those he wants to rule over.

A guy like that would never understand the powerless who actually are bullied by the powerful, from the weird awkward kid in grade school to those abused by business and government in this country every single goddamned day.

You don’t have to imagine it, you already have that guy in office now.

That’s what makes Howard Schultz unqualified to be president. That right there.

Guys like this, Schultz, Trump, they think their wealth and power makes them infallible, makes them witty, intelligent, attractive, perfect. They do. Trump was right, when you're a star, they let you do it. You can do anything, Grab 'em by the pussy. Shoot a guy on 5th Avenue. Hell, they'll tell you they like it, that you're funny, brilliant, so clever, ha hah, Mr. Rich Powerful Guy, you're amazing. So tall, so handsome, so smart, so funny – all while hiding their revulsion behind a fake plastic smile. If you think I’m kidding, just look at Evangelicals in this country, the ones trying to convince themselves that Trump is actually some sort of moral Christian. They know exactly how shitty Trump is. They know. Yes, they do. They pretend to hold the moral high ground, but they are every bit the greedy immoral money-worshiping pussy-grabbing hypocrites that Trump is. Because they enable him. Because they’ll put up with anything, so long as they get close to the levers of power. And so they tell Trump what he wants to hear, you’re so smart, you’re so handsome, you’re so sexy. And Trump is so morally bankrupt, so vain, so petty and small, that he believes them.

It’s no different with Howard Schultz, he’s the same thing in a slicker package – no different than the shitty burned coffee his company serves, whored up in slick packaging. 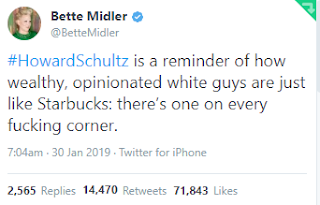 These guys, like Trump, like Schultz, their egos won't let them admit that it's their money other people admire. That's why everybody puts up with their idiotic comb-overs and bad breath, their ignorant clueless stupidity and their pussy grabbing boorish behavior.

We create these assholes.

Rich guys like Trump, like Schultz? Sure, the fops and the hanger-ons, the toadies and the suck-ups, those who crave power, convince them that they're infallible and they believe it.

It is. We watch their horrible, idiotic TV shows. We buy their horrible shitty coffee. We elect leaders who enable their avarice and greed and selfish booger-eating stupidity at our own expense. We do.

It's our nature to do so.

That’s not an excuse, but maybe it’s an explanation of how we keep ending up here.

I, I, I, I, that's all these guys ever talk about. I. Me. Because that's all they ever think about. Themselves. You don't get to be Donald Trump, you don't get to be Howard Schultz, without first being a self-centered self-involved self-aggrandizing prick. If you do anything for anybody else, it's only because there's something in it for you.

Schultz isn’t a decent employer because he’s a decent guy, QED. He was a decent employer because it made him rich, because treating his employees with a bare modicum of respect was a whole lot cheaper than treating them like Trump treats his employees. That’s all. Is that terrible? Yes. No. Maybe. It’s good business. At least it was good for Schultz’s business. It made him rich.

But is that how you want America run?

Here's the thing: These people tell you that they'll run America just like they run their business.

And that is the one and only truth they will ever speak.

That's exactly what they do.

If you elect a businessman, they will run government exactly like they run their business. If they do anything for you, for the average American, it's only because there's something in it for them.

He thinks Reagan was a great President because he (supposedly) never took his suit jacket off in the Oval Office.

He doesn’t think rich people should have to pay for the privilege of being rich, instead he thinks they are entitled to it. Because they are better. Because they deserve it.

Good government is designed to protect you from business.

The business of business is business.

The business of government, our government anyway, is to protect its citizens specifically from businessmen just like Trump, just like Schultz.

You elect one of these greedy self centered sons of bitches and what do you get?

Look around, you're living it.

If you elect a businessman to run your government like a business, then you're gonna get the business.

And you're going to get it good and hard.

America isn't Congress. America isn't Washington. America is the striving immigrant who starts a business, or the mom who works two low-wage jobs to give her kid a better life. America is the union leader and the CEO who put aside their differences to make the economy stronger.
-- Barack Obama