Giving Us The Business

You know the last eight years, they borrowed more than it did in the whole history of our country. So they borrowed more than $10 trillion, right? And yet, we picked up 5.2 trillion just in the stock market. Possibly picked up the whole thing in terms of the first nine months, in terms of value. So you could say, in one sense, we’re really increasing values. And maybe in a sense we’re reducing debt. But we’re very honored by it. And we’re very, very happy with what’s happening on Wall Street.
- President Donald J. Trump, Hannity, Oct 12, 2017

This is how billionaires think. 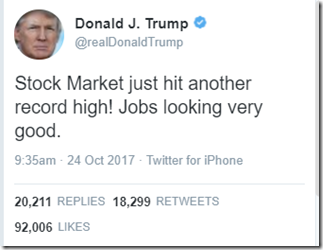 A surging stock market is great for billionaires, sure it is. You’ll get no argument from me on that. 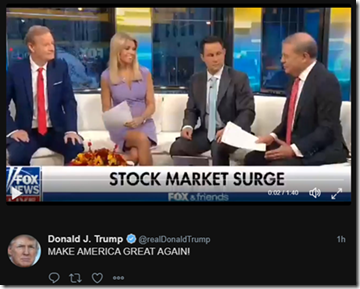 A rising stock market sure is good for Donald Trump.

Trickle-down economics, the same warm piss disguised as lemonade Republicans have been peddling since before Reagan.

And how’s that worked out for you?

Seems intuitive, doesn't it? Seems logical. Seems to follow. Good for business, good for me.

Sure, a rising stock market is better than a falling one (Caveat: unless you’re attempting to short your stock, but just go with me for a minute), but is that really good for the average American?

Or maybe not. Or maybe both.

See, the things that are good for business aren't necessarily good for people. Sometimes they are, yes, but not always.

John Thain was the last CEO of Merrill Lynch. He made billions upon billions for the stock market. Literally.

Now what’s good for the stock market must be good for you, right?That’s Trump’s whole message this morning.

And John Thain was great for business, great for the stock market.

Until he destroyed everything.

Until that ballooning stock market he helped create imploded and precipitated a global financial collapse that vaporized literally trillions of dollars, destroyed century-old too-big-to-fail companies and brand new mom & pop businesses alike, zeroed millions of retirement accounts, destroyed the life savings of millions, and left hundreds of thousands jobless, hungry, and out on the street all over the globe.

Max Belfort: What kind of a hooker takes credit cards?
Donnie Azoff: A rich one!
-- The Wolf of Wall Street, 2013.

That's good work if you can get it.

After that, Thain headed up Citigroup, making millions more. Then he retired. With his fortune intact.

And how'd that work out for you? How's your retirement account? Recovered from Thain’s recession?

Martin Shkreli made millions for the stock market by driving up the prices of certain critical drugs.

That was really great for investors.

And in fact, that was the whole point. Shkreli wasn’t a pharmacist, he was a hedge fund manager. The entire reason he got into the drug business was to make money. Which was a pretty sweet gig while it lasted. Great for stocks.

Kinda sucked if you were dying from AIDS and needed a Daraprim prescription though.

Mylan raised the price of the EpiPen to levels that literally killed people with allergies.

Mylan made billions. The company’s CEO became a millionaire. And the stockholders were overjoyed.

See, business raises its stock by becoming more profitable, i.e. by creating a monopoly like Shkreli, by creating a market and limiting availability like Mylan, by tricking people into investing by creating buzz for products that don't actually exist (see Silicon Valley et al), by risking other people’s money like Thain, by offshoring their manufacturing, by outsourcing, by rightsizing, by downsizing, by hiring cheap foreign labor on temp visas like, oh, let's say Donald Trump’s Mar-a-Lago for example.

That’s good for the stock market.

But is that good for you?

If you're invested in those companies.

Not so great if you're poor and your kid is allergic to bees though.

If any of my competitors were drowning, I'd stick a hose in their mouth and turn on the water. It is ridiculous to call this an industry. This is not. This is rat eat rat, dog eat dog. I'll kill 'em, and I'm going to kill 'em before they kill me. You're talking about the American way – of survival of the fittest.
-- Ray Kroc, American businessman, founder of McDonalds

You know what's good for business? Strip mining. Polluting. High oil prices. Shady deals. The 2006-07 US Housing Bubble was great for the stock market, really really great. Right up until it destroyed all your jobs, your retirement, and left you homeless.

But it's the middle class and the poor who always pay the price when it fails. Always. Every time.

And the wealthy are fine with this.

Of course they are.

This was their idea.

This is how billionaires like Trump go bankrupt over and over without losing a penny of their wealth.

Sure, every once in a while the good guys win one and people like Martin Shkreli and Bernie Madoff go to jail…

..but, Donald Trump didn't lose his home when the bubble burst last time.

And John Thain made millions destroying your life.

And Martin Shkreli still has $70 million waiting for him when he gets out.

These people, their business model is simple: rape and pillage, rape and pillage, squeeze the suckers for all the market can bear plus ten percent. Then, when it all falls apart, demand those very same victims – the poor and middle-class – bail them out or suffer even worse. And if called on it, deny all responsibility and place the blame on the very same victims with a smug Martin Shkreli sneer and a supercilious caveat emptor.

And yesterday Republicans voted to make it illegal to sue these people when they blow up the economy and steal your money.

Which they most certainly will do again.

Using the stock market as the sole measure of economic "greatness" is disingenuous at best – and dangerously fatal at worst. Fatal for you.

If you elect wealthy business people to run the country, well, then you're going to get the business.

That's the one thing you can count on.

I love money more than the things it can buy. But what I love more than money is other people's money.
-- Lawrence Garfield, Other People’s Money, 1991