Sure, of course. Of course.

Slavery. We can say that’s bad without having to caveat it.

Slavery. You remember how that works, don’t you? Sure you do. Back in the heyday of American slavery, you go to an African nation, grab any random black person, and you’re like, hey, you belong to me now. You’re mine. You’re worth a lot of money. You’re a resource here for the taking, like gold or oil or lumber or land. You’re not people, you’re property. My property. You have no rights, no say in your own life, your own body, your own children.  In fact, your children are mine too, to beat, to rape, to work to death. You’re farm equipment. You’re livestock, no more, no less. Get in the boat. Pick the cotton all the live long day.

That’s some shady shit, right there.

Agreed? I mean, we are all agreed on this, aren’t we?

I honestly thought that would be the one thing we Americans could all agree on.

Black, white, yellow, red, gay, straight, left, right, liberal, conservative, Republican, Democrat, Libertarian, Christian, Muslim, Jew, atheist, Biggie, Tupac, whatever we identify as, I thought that would be the one thing we Americans could agree on without caveat.

Slavery is an evil blot on American history.

Slavery will always be our eternal shame as a nation. We can surely all agree on that, can’t we?

It’s a hundred years behind us now, slavery. None of us now were slavers. None of us now alive were slaves. But we can remember. We can say the words without flinching, can’t we? We can acknowledge that terrible history without the need to defend any of it. We can honor the victims of it and denounce the institution and learn from our terrible, complicated heritage. All of it. And we can acknowledge that while slavery might have helped build this nation, slavery as an institution uprooted hundreds of thousands of innocent people, destroyed their lives and families, erased their histories, and the effects of that terrible diaspora are still being felt today.

Certainly we can admit that. Without caveat.

That’s what I thought.

Foolishly, as it turns out.

I said this online after Michelle Obama talked about slavery’s role in building the White House.

I said, hey, at least we can all condemn slavery without caveat. Right? I mean, slavery, right?

That’s when the slavery apologists showed up.

Hold on, they said. Black people started it. Oh yes. Africans had slaves. It’s true! Black people invented slavery, Bro! It’s in the bible! And American slaves, well, see, at least they were enslaved by, like, Christian white people and so our slaves got to learn about Jesus! That’s good, isn’t it? And they didn’t have, like, technology back then so people had to do the work. Somebody had to pick the cotton, right? Without human power, why, America wouldn’t even exist. It’s not racism, man, somebody had to do the work and those people were, you know, convenient. What about that? Plus, slaves were really, like, valuable. White people loved their slaves. Because, they, like, cost a lot. So, you know, white people took care of them, slaves got free food and free clothes and nice little free slave houses to live in and free healthcare, and…

…and I sat there, watching these comments come in with my mouth hanging open.

I know. I knew this was out there. I did. But still.

If you’re a person of color, you’re laughing at me right now, aren’t you? I’m a straight white male and that gives me the privilege of being just that goddamned naïve. I know. You’re shaking your head and laughing at me. And I deserve it.

Because I really was naïve enough to think this was something we could all agree on. I’ve been doing this for a long time. I get thousands of messages per week. A significant percentage of those are from haters and bigots and conspiracy nuts and the proudly ignorant. I mean, I’m a cynical son of a bitch and I expect the worst from people pretty much all of the time. I’m not stupid. I expected a few of these comments.

But this was hundreds.

White conservatives, of course, most of them. With a few supposed white liberals tossed in for leavening. And it wasn’t just me, those comments were everywhere on social media, under articles in the Washington Post and the Wall Street Journal and the New York Times and the Atlanta Journal Constitution.

Slavery apologia is a reflex with these people.

Slavery was bad, but…

But, if this guy, me, this liberal, this progressive, this guy I don’t like, if that guy – let alone Michelle Obama for crying out loud – says slavery was bad, well, I have to reflexively counter. I have to caveat it. Have to. No matter how staggeringly stupid the argument is, I have to use it, have to counter, have to defend the horrible evil institution of slavery, have to justify it in some way, have to rationalize it, have to make it sound … less bad, less evil, somehow.

Now, before we go any further, let me make something clear: No, I don’t think all conservatives are slavery apologists.

No, I don’t think all white Americans are slavery apologists.

But a hell of a lot of them are.

Slavery is one thing all decent Americans, left or right, republican or democrat, black or white, should be able to agree on without caveat, without a “but” in the middle of the sentence.

Slavery is bad. Period. No buts.

This morning I listened to a caller on C-Span’s Washington Journal: 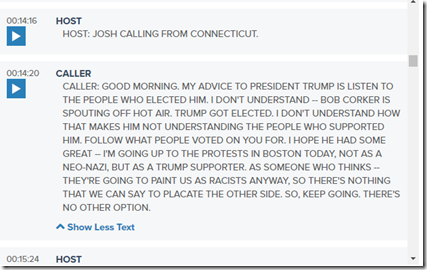 He says he’s going to join in the so-called “Free Speech” rally in Boston today.

He’s going to march with avowed white supremacists, with Nazis.

Not because he is a Nazi, he says, but because he’s a Trump supporter.

He going to join white supremacists “as someone – they’re going to paint us as racists anyway, so there’s nothing that we can say to placate the other side, so, keep going. There’s no other option.”

There’s no other option than to stand with Nazis?

This guy, he would rather stand with Nazis – goddamned Nazis – than his fellow Americans.

He looked out there, he saw the sides, and he chose … white supremacists.

No other option. Keep going. Join the Nazis.

Well, I say to you there is another option. Stand with us. Join us. Be an American.

As my fellow Alaskan, writer and journalist Shannyn Moore, said, “Remember when hating fascism didn’t make you a liberal?”

I mean, you would think we could all agree on this – even if it is the only thing we can agree on.

You would think that we, we Americans, we could all agree that standing against fascism, against white supremacists, against the Klan, against Nazis for fucks's sake, wouldn't be a left, right, liberal, conservative, republican, democrat thing.

This is an American thing.

This should be the one thing we all agree on.

This should be the one thing our leaders, no matter their party or ideology, should agree on.

This is the one thing we all must agree on. Without caveat. Without qualification.

If you must qualify your denouncement of fascism, of Nazis, of the Klan, of the Confederacy, of slavery, of evil, with a “but” in the middle of your sentence, you’re the problem.

Standing against Nazis without caveat, without qualification, without equivocation should be an American thing.

Who are you standing with?

That flag waving over you head? Is it Old Glory? Or the swastika and the Stars & Bars?

In this fight, there is no neutral ground.

In this fight, silence is agreement.

In this fight, if you stand with Confederates, then you’re a traitor. You’re the enemy of America.

If you stand with the Klan, you’re a bigot, a racist, a hater, a villain.

If you stand with fascists, you’re a goddamned fascist.

If you stand with Nazis, then you’re a fucking Nazi.

And it’s really just as simple as that.

You’re not a machine. You’re not an animal. You’re a human being and you don’t have to be a slave to reflex. If you can’t reject this evil without caveat, without a kneejerk “but” in the middle of your response, without attempting to justify evil out of political reflex, then you have lost your mind. You’re the problem. You’re what gives evil a leg up.

Who are you standing with? Nazis? Or Americans?

If you don’t stand up, if you don’t take a side, if you turn away now, then you are complicit.

If you can’t forcefully denounce evil without caveat, without condition, without a “but,” then you’ve chosen evil.

This is about the world we leave to our children.

This is about the United States of America.

This is about our place in history.

This is about evil and what you intend to do about it.

And what you do defines all of us as a people, as a nation, as Americans.

If you want a better nation, you have to be better citizens.