Death for Fun and Profit 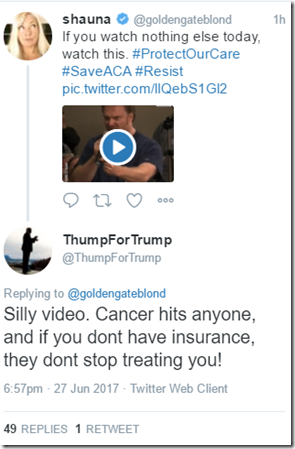 A Trump supporter actually said, and I quote, "Cancer ... if you don't have insurance, they don't stop treating you!"

“… and if you don’t have insurance they don’t stop treating you!”

Say that out loud to yourself.

Say them as if you mean it, as if you believe it.

Pause in the middle, give the sentence a dramatic beat.

If you don't have insurance...

...they don't stop treating you.

Feel the words in your mouth, the sweet, sweet taste of magic unicorn meat like cotton candy spun from the nicotine stained tears of Ayn Rand and red-boned Republican freedom.

If you don’t have insurance, they don’t stop treating you.

How many times have you heard this?

You can always go to the emergency room if you have cancer.

They have to treat you, even if you can’t pay. Nobody goes without healthcare in America.

How many times? How many times have you heard that in this debate, in this endless shitfight about healthcare in America?

Yeah, listen, if you could get treated without insurance in this country, well, then we wouldn't be having this conversation in the first place and, actually, they do stop treating you if you run out of money.

Some specialized gene-specific cancer drugs are $15,000 PER MONTH. Or more.

In cases of aggressive cancers where all other therapies have failed, these drugs are the only options.

These drugs, they're difficult to develop.

They're difficult to get.

Now, we can argue about the ridiculous cost of drugs in this country (and I'm sure you all will in the comments), but that's not actually the point here.

The point is this: if you can't pay, you die.

Hell, you don't even have to get cancer. It doesn’t have to be $15,000. A couple of hundred bucks is the difference between life and death for many Americans.

If you're allergic to bees and you can't afford $300 for an Epipen, well, you'd better hope somebody comes along with a clean pocket knife and some idea of how to perform an emergency tracheotomy when your throat starts swelling closed.

This idiotic idea, that everybody has access to healthcare, that you can just go to the emergency room for any kind of condition and be treated free of charge, is one of the most obviously wrong and most deliberately obtuse blind spots of modern conservatism – which not only rejects the idea of universal healthcare out of hand but also thinks your healthcare should involve their religion and your employer and that the insurance you've been paying for (if you're lucky enough to have insurance) should be able to drop coverage if you get sick.

Earlier this week, Kellyanne Conway, Evil Counselor, ur, I mean, Advisor to the President, said "Obamacare took Medicaid, which was designed to help the poor, the needy, the sick, disabled, also children and pregnant women, it took it and went way above the poverty line and opened it up to many able-bodied Americans. [Those able bodied people] should probably find other — at least see if there are other options for them. If they are able-bodied and they want to work, then they'll have employer-sponsored benefits like you and I do."

If they are able bodied and they want to work, they'll have employer-sponsored benefits like you and I do.

This is the kind of idiotic blather you get when you elect privileged rich people who have never actually had to work for a living at the bottom end of society.

This is the kind of ridiculous cluelessness that can only be achieved by people who never have to decide between eating and paying for a prescription.

This is the kind of smug arrogance that you get when your politics and your religion come from the same ideology of “Fuck you, I got mine.”

Furthermore, these are the same people who also reject the idea of a living wage. 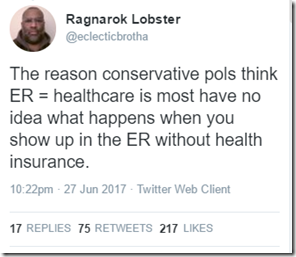 I'm here in the impoverished South.

I'm surrounded by far too many people who have trouble putting food on the table and paying the rent.

They're good people, these poor Southerners. They work hard. They're mechanics who fix cars. They're yard care workers who mow lawns for rich people in the boiling heat. They run daycare out of their houses. They're students, trying to fit in classes at the junior college between shifts at the local burger joint.

Some of them, like my wife 30 years ago, might through grit and raw determination claw their way out.

But many, the majority, don’t.

I could go on and on. I could show you pictures. I could introduce you to them by name.

These people, some of them work 60, 70, 80 hours, six and seven days a week. And still – and still – they're trapped in an endless cycle of low wages and lack of opportunity, crushed by poverty and the inability to get ahead in any fashion. It’s just how it is. It’s always been like this here. It doesn’t matter if the economy is booming or has gone bust yet again.  These people, they don't own the crappy houses they live in, they rent. They don't have anything in the bank. Every couple of years a hurricane comes along and wipes out whatever it is they have managed to build up. Many of them don't even have teeth – and the cliché of the toothless Southerner is a whole lot less funny when you see an attractive young girl behind the counter at the local hardware store and her smile is full of rotten brown pegs because her parents couldn't afford even basic dental care for their children. And don't you think for one second that won't impact her future, her opportunity, her employment, her health. These people, they can't afford birth control, so they have kids they can barely feed, let alone send to the dentist, digging themselves in deeper and deeper. And the goddamned churches aren't any help, with the preachers and their useless messages of abstinence and damnation and guilt.

These people, they can't afford even random healthcare at some shitty neighborhood for-profit clinic staffed by a single physician's assistant in a dirty lab coat when their kid inevitably gets strep throat much less CANCER.

It’s not just the South, it’s the slowly decaying wreckage of Northern industrial cities, places like Flint and Detroit, Baltimore, Rome, Louisville, Milwaukee, places where manufacturing and industry and jobs long ago fled for more profitable fields. It’s New England where the fishing industry, never particularly profitable in the first place, has collapsed. It’s the Salton Sea. It’s the farms of the Midwest. It’s the coal mining towns of the Appalachians.

It’s America, everywhere outside the gilded towers of the rich.

If you've got cancer, and you cut yourself, sure, you can go to the Emergency Room and get stitches even if you can't pay.

Of course you can.

But that is as far as it goes.

The ER doctor sure as hell isn't going to give you chemo treatments or $15,000 per dose miracle drugs based on an expensive DNA screening. You'll get a sympathetic referral to an oncologist who maybe does some pro-bono work if you're lucky, and shown the door if you're not.

And there are far, far too many people at all income levels in this country who don't have access to even lousy healthcare.

There are far, far too many who don't have access to the drugs and the therapies and the doctors they need just to live.

There are far, far too many people who have to daily make a choice between eating and paying for healthcare – even when they've worked their whole lives.

And beyond that, somewhere above the poverty line, there are far, far too many people who did everything right, who got an education, who worked and did without and got insurance, who paid into Medicare for 40 years, who bought supplemental insurance, and then got sick and suddenly they got dropped, or faced lifetime caps, or just weren't covered for that illness because people who are already sick and out of resources can't fight the bottomless pockets of the insurance companies or their employer who suddenly decided covering cancer was against their religion.

This is what happens when healthcare isn't a right.

This is what happens when those in charge are insulated from those they govern, when they are safe in their districts and assured of their power and privilege.

This what happens when the morality of those in power is based on profit and greed and the arrogant certainty that they are better than those they govern.

This what happens when you elect a government that hires armed biker gangs to keep their own constituents away from town hall meetings – exactly as my own Representative did right here in Milton, Florida.

This is what happens when your healthcare is decided by thirteen privileged white men behind closed doors. No people of color. No women. Just thirteen rich white men.

This is what happens when religion and political ideology alike are based on the simple selfish principle of “Fuck you, I got mine.”

This is what happens when you elect billionaires to office and believe them when they try to sell you magic unicorns.