Oh no! Run for your lives, Everybody! 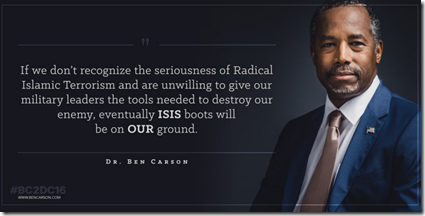 "If we don't recognize the seriousness of Radical Islamic Terrorism and are unwilling to give our military leaders the tools needed to destroy our enemy, eventually ISIS boots will be on our ground."

The seriousness. Why won’t we recognize it?

Okay. Show of hands, any of you sissy liberals not recognize the seriousness of terrorism?

Hey! Quit your giggling. This is serious and it’s about time you all recognized it.  Conservatives, boy, they know all about terrorism. So you guys better shape up.

You, there in the back, in the hemp overalls and the bloodshot eyes! You're nodding your head. Are you serious? Are you? Terrorism, harshing your mellow? Lemme see your serious face, lemme see it! Okay. Better.

How about you? You, in the front row, with the hairy legs and the "Meat is Murder" T-shirt. How about it, Bean Curd Breath? What? Nothing funny about terrorism, you say? Goddamned right, sounds like you're serious to me. Good. Good.

You there. Yes, you. What? Yes, yes, I feel the goddamned Bern, but what about … oh, you're serious about terrorism too? Well okay then.

No really, anybody here not think terrorism is serious? Anybody? C'mon, don't be shy, let's see those hands, those soft little girly-man hands ... anybody, anybody at all?

Well, it sure looks like we're all on the same page. Serious as shit about terrorism.

So what’s the problem?

There's still terrorism even though we said the magic words. Why, it's almost like magic doesn't actually work and the terrorists don't give a shit what we call them.

Maybe if we prayed on it... no? Dear Our God, help us kill that other God’s followers who want their God to kill Our God, amen. No? Okay. Just putting it out there.

What? What's that? You, the jowly-necked red-faced guy with the Mini-14 in the tactical sling. Yes, in the dirty wrinkled camo, yes, yes, waving the Confederate Battle Flag. You! You look like a military genius. Sure. You've got a suggestion? Speak up, I couldn’t hear you over that last chorus of Kumbaya. What? Oh! Give our military commanders the tools they need to destroy ISIS? Why that's brilliant. Just a brilliant idea you got there, Sweet Tea, you learn counter terrorism strategy in the militia while you were off fighting Jade Helm, did you?

Sarcasm? What? No. Nooooo. I have nothing but attentive respect for the expertise of a guy whose sum total military experience is a make-believe bullshit offer of a West Point “scholarship” when he was in high school. As a veteran, I can totally respect that. Sure. Now, I do grant you it's no fake military prep-school to keep rich kids out of Vietnam, but I’m sure this Carson character totally knows serious terrorism when he sees it. I mean, it’s not brain surgery, is it?

So, tools. Ben Carson says we must give our commanders the "tools needed to destroy our enemy" otherwise invasion! Look, out there on the horizon, what’s that? Why, it’s the ISIS fleet! It’s ISIS nuclear aircraft carriers and ISIS cruisers and ISIS destroyers launching ISIS missiles! What’s that, up there? It’s the ISIS Air Force! Soon our skies will be filled with ISIS paratroopers and our beaches will become landing zones for ISIS Marines. Soon ISIS boots will be on American ground.

What tools do our commanders need to push back the horde? My God, give them the tools!

What? They have all of that already? That and much, much more? But, what then? What tools?

Hey, you don’t mean maybe (and this is just a thought, I mean, what would I know about fighting terrorists in the Middle East, right?) we all work together as a nation? You know, stand with our president? Congress maybe come together, left and right, liberal and conservative, put aside their partisan bullshit and work together like they all promised to do. Sure, you remember, September 12th, 2001, on the steps of the Capitol Building, smoke from the burning Pentagon still staining the sky. Work together against our common enemy.

Heh heh, no. Of course not. What was I thinking? Never mind.

If we don't recognize the seriousness of Radical Islamic Terrorism and are unwilling to give our military leaders the tools needed to destroy our enemy, eventually ISIS boots will be on our ground.

Boy, where have we heard that before?

If we don’t fight them over there, we’ll have to fight ‘em here.

If we don’t fight ISIS over there, we’ll have to fight ‘em here.

If we don’t fight Saddam over there, we’ll have to fight him here.

If we don’t fight the Taliban over there, we’ll have to fight them here.

It’s the second sounding of the same old call to arms.

You know, back when they used that phrase about the Nazis and Imperial Japan they might even have been right.  But  it’s become a cliché, unending paranoia as policy and a fundraising tool, an endless parade of increasingly lame enemies and vague threats and undefined objectives and open ended unfocused strategies.

By now, Americans should be smart enough to see this sickness for what it is, God knows we’ve had enough practice.

If we don't recognize the seriousness of Radical Islamic Terrorism?

Who doesn’t recognize the seriousness of terrorism? Who? Name that guy. Go on. And if you say Obama, you’re a fucking idiot. Of course the president of the United States of America understands the seriousness of terrorism, probably one hell of a lot better than you do. Sure as hell better than the drooling paranoids at Fox News and their fraudulent military advisors. The president has the very best military advisors, national security experts, and information in the world. Serious? He couldn’t possibly get any more serious. So who exactly are we talking about here? Who’s not serious about terrorism?

If we are unwilling to give our military leaders the tools needed to destroy our enemy?

What the hell is he talking about? What tools? Be specific. Unrestricted warfare? Nukes, carpet bombing, full out invasion and occupation on the order of WWII? That’s it, isn’t it? Bomb ‘em back to the Stone Age, kill ‘em all and let Republican Jesus sort it out. Right? Tools? This is the kind of vague undefined nonsense that got us into this mess in the first goddamned place. Tools? Where the fuck was Carson and his tools when Rumsfeld sent us to war with his unknown unknowns  and the military he had and not the one he wanted and substandard body armor from the lowest bidder and radios that didn’t work and unarmored trucks built by Dick Cheney’s buddies in the defense industry? When people like Carson and Trump talk about how they’ll whip ISIS, you can damned well bet there’s nothing behind it but more flag waving bluster and dead American soldiers.

Eventually ISIS boots will be on our ground…

And there it is.

There it is. Right there.

Modern conservatism in a nutshell: They’re coming for our stuff.

They’re coming to kill us.

They’re coming to take our freedom.

This is what it’s come to, this is the once great party of Lincoln. Fear. Paranoia. Terror.

Even if we kill every single one of them, they’ve still won.

Even if we carpet bomb the Middle East.

Even if we nuke ‘em.

Even if we burn the entire region down to the bedrock and piss in the ashes.

They’ve won because the goal of terrorism is terror.

Because the goal of terrorism is to make us afraid.

Because the goal of terrorism is to make us hate.

The terrorists don’t have to invade.