I have a mortgage and a kid in college and the cat needs to eat.

As Stonekettle Station has increased in popularity, it takes up more and more of my time to do proper research and analysis, write the content you come here for, and manage the site, commenting, and the associated social media feeds.

And when I’m doing that, I’m not writing novels or short stories or paying copy.

That said, as a number of folks have noted, I’ve been a little light on posting here lately. This is for several reasons mostly having to do with travel and real world issues. I’ve got a number of things going on my life at present which require a significant amount of my time. It’s nothing horrible, don’t panic and please don’t write to ask. I appreciate your concern, but not everything I do is public domain. It’s simply that a number of things happened all at once which require my attention in priority over writing this blog, the mundane details of which don’t need to be shared publicly – though they will likely become fodder for future articles and projects. That’s the best part about being a writer, everything is grist for the mill (too bad it’s not likewise tax deductible). The situation should be resolved shortly and I’ll be back to publishing at least one in-depth essay each week along with some shorter pieces.

Now, based on my business model, every once in a while I need to run a donation drive.

Ideally, I write an article and if you like it enough, you’ll kick in.  And thankfully, you do so often enough that I can survive doing this. I’ll never get rich doing it, but it beats writing advertising jingles or flipping burgers. That is going to become even more important to me as my business model evolves. More on that later.

But as I said, every once in a while I have to run a donation campaign. I refuse to do it more than once a year. And it makes me very uncomfortable to say, hey, give me money and, you know, maybe I’ll write something you like later. Don’t get me wrong, you toss the coins and I’ll dance like a monkey in a shiny silver vest, sure, but I’ve been thinking about this and I’d like you to get more. So here’s what I’ve come up with:

As many of you know, I’m also an artist.

I turn trees into things, sometimes firewood but usually stuff more like this: 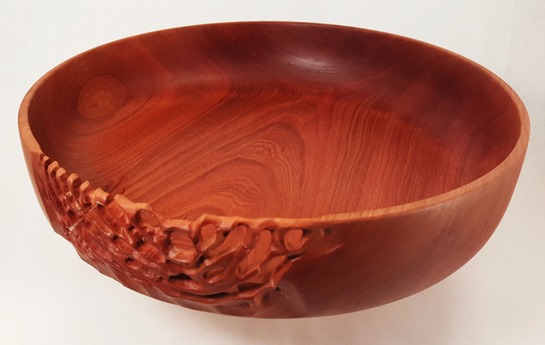 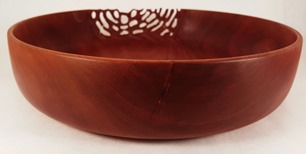 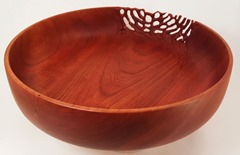 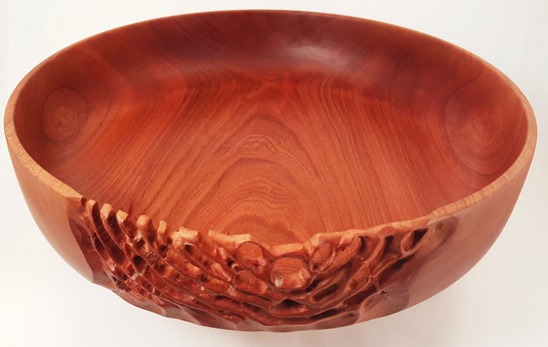 This is a beautiful piece of California redwood. When I acquired it, there were a number of naturally occurring cracks on one side caused by drying. Now, normally a turner (someone who works on a lathe) would cut the piece down to solid wood and throw the flawed part away. But redwood in this size is expensive and increasingly difficult to acquire and I really didn’t want to throw any of it away.

So the flaws became features.

The cracks were filled with resin and stabilized to hold the wood together while it was being worked on the lathe. Then after turning the bowl was hand carved with a variety of tools to highlight the natural features and give the piece character. It’s 12” in diameter and finished with walnut oil and soft wood wax which gives it a deep luster and complex finish.  It’s food safe, suitable for nuts or hard candies, but it is probably better suited as an art piece for display.

It is signed via laser-etch on the bottom: 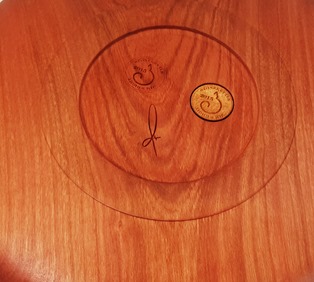 Typically my artwork sells so fast I can’t keep up with it (how terrible right? Every artist should have such problems). This piece is different. I’ve had this piece available for sale for a while now on my Etsy store, but it hasn’t sold because it’s simply too expensive.

So here’s what I’m going to do:

Anybody who donates $50 or more during the month of September 2015 will be put in the running to win this piece.

Anybody who donates between $1 and $49 during the month of September will be eligible to win a handmade customized laser-engraved pen in the same style I recently made for a number of famous writers at the World Science Fiction Convention (Sasquan) in Spokane, Washington.  I will randomly select TWO winners in this category. Winners will be able to specify what they want engraved on the pen within certain limitations (you can only fit so much on a pen barrel folks). 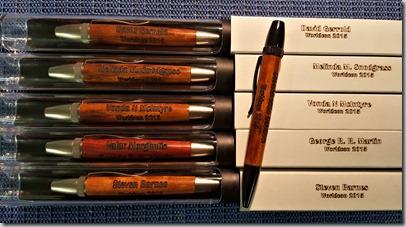 Additionally, the three winners will each (if they so desire) suggest a topic for an in-depth essay on current events and I will write it for publication here on Stonekettle Station.

Winners will be selected October 1st.

Addendum: To be clear, this is not a lottery or a raffle.  Donations are voluntary subscription fees specifically in support of this blog, i.e. you’re paying for content not a chance to win something. I am not claiming any tax-exempt status or charity. Donations are considered business income and I pay all applicable state and federal taxes on that income and I have the records to prove it.

The bowl, the pens, those are my artwork, created and paid for by me.  As such I chose to randomly give them away to supporters, just as I gave away pens to writers and supporters at Worldcon last month. I’m simply using this month’s subscriptions as the pool to select from since I have no other way to determine who readers are.

You are not paying for a chance to win a prize, you’re paying for the content of this blog and my associated social media feeds.  // Jim