Since the point of this essay largely involves Twitter,
You can find me there at www.twitter.com/stonekettle
and view the source material for yourself

Love thy neighbor as thy self
- Jesus

It’s a curious thing that when religious people create a law granting themselves “religious freedom” somehow the rest of us end up with less freedom.

That’s how I began the previous post here on Stonekettle Station.

When those in a position of power create laws to grant themselves the freedom to discriminate against others, justified by arbitrary non-quantifiable nonsense such as  “sincerely held beliefs,” it is absolutely, utterly, inevitable that those others will end up losing their freedoms.

That’s the whole point of the law in the first place.

It’s ironic, since Christians, of all religious Americans, have not been restricted in any way whatsoever. They make up the overwhelming majority of the population. Every single major religious holiday in the US is a Christian one – and when other religions such as Islam request national recognition for a holiday of their own they are resoundingly shouted down by Christians offended at the very idea of any religious holiday not a Christian one. The symbols and fetishes of Christianity are everywhere in America. Caucasian bearded Jesus smiles or frowns from billboards along the highways, next to huge signs supposedly quoting the Christian God. Christian crosses hang prominently, proudly, from the necks of Americans wherever you look, and dot hilltops and sprout like weeds alongside our roads.  Christian churches reside on nearly every street corner. Small towns across America vie for the title of “Most churches per capita” – I grew up in a small Midwestern town that claimed that very mantle for itself. Christianity owns its own schools, and its own radio and TV stations along with hundreds of cable channels, and pulls in billions, billions, tax free.  Christianity even has its own amusement parks in America, but you don’t see any Jewish ones, or Buddhist, or Wiccan, or heaven forbid a Muslim one.

When Christian fanatics such as Westboro Baptist Church stand on a street corner in America and scream hatred at the rest of us, including other Christians, we say, well, you know, we don’t like it but that’s their right.  Let it be group of bearded men in Arab robes waving the Quran and see what happens. Go on, if you dare. When pastors want to make a political statement in America, it’s not the Bible they’re burning in front of the TV cameras, is it?

Christians are hardly discriminated against in America, there’s no public “debate” when Christians legally purchase land and set about building yet another church – but ask to build a mosque in the middle of town, see what happens.

No, Christians are not in any way discriminated against in America.

But religion loves to pretend persecution, even when it basks in power and privilege. Nothing proclaims piety like martyrdom. And nothing threatens religion like having to respect other beliefs, not even when your God and his prophet specifically command you to do so.

The only reason for “religious freedom restoration” laws, the entire reason for such laws, is to give legal protection to bigots so that they may openly treat others as less than full citizens under the shield of religion.

Religious Freedom laws do not protect liberty, they take it away.

Naturally, the bigots who use religion as a shield don’t see it that way.

To them, freedom is a finite resource. If another gets more, they feel cheated, diminished, less.

And that is because to them liberty and freedom aren’t human rights but rather God given.

Given by their God, of course.

They proclaim that the rights enumerated in the Constitution are not a manmade contract between citizens, a template for law and government, but rather holy writ handed down by their God.  They say it over and over, rights come from our God, not government, not men, but God. Our God. Ours. Not your god, ours, Jehovah, the angry and petulant and spiteful Old Testament Christian God.  This is a Christian nation. Our nation. Our God. Ours.

This belief shapes how they view the world and in particular America.

They believe this gives them leave to hate and despise others who are different, to treat their neighbors as less than human, as less than full citizens. Their God does not love these people, so why should they?

It’s just an excuse, of course – which was the whole point of yesterday’s tongue-in-cheek essay.

Naturally their God hates all the same people they do. Naturally. And conveniently, He always does.

If they didn’t have religion, they’d still find a way to way to hate others. They always do. Skin color, race, origin, accent, weight, sex, social class, and especially religion, the haters gonna hate. They’ll do it openly, smugly pointing to their God as an excuse, if they can. And when laws are created to protect the objects of their derision, when the laws don’t allow them to openly discriminate against race, creed, color, sex, age, or national origin, then they always and inevitably find somebody else to hate.

They should be grateful.

Yes, they should be grateful. Why do they want to be here anyway? Why, you know, if I was them, if I was them, why I would just go somewhere else. I would. I wouldn’t make a big fuss. If a business refused to serve me, why that’s their right. I’d just take my business elsewhere. Let the free market fix it. I wouldn’t demand that they change their beliefs. Certainly not. That’s freedom. That’s liberty. I’d just go somewhere else.

Let’s just see what happens when when a Christian is refused service, shall we?

I posted this on Twitter earlier in the week and began yesterday’s essay with it:

I got a lot of feedback.

In yesterdays essay, I used this Twitter response as a lead in:

Earl was unhappy that I used him as an example. And he wrote a long, long response to yesterday’s post, condescendingly explaining to me how I was wrong about America and religion and the law.

Earl was not happy about that:

As you can see, I explained to Earl why I didn’t let his comment post.  It was an ad hominem fallacy, he’d made it personal and therefore it didn’t meet my clearly posted commenting rules.

Naturally, Earl, being a Christian and all, understood and gratefully complied. 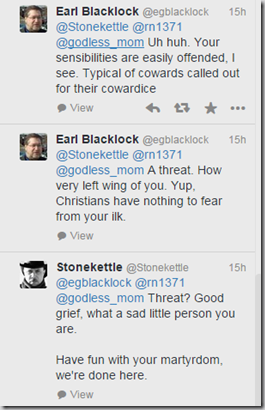 Why, it seems Earl was getting angry.

I guess Earl was upset about something.

Coward, he called me. Why you sniveling coward! Cry home to mommy! Coward! That’s Earl, threats and insults, rage and anger. How very Christ-like, these Christians.

Jesus, I’m certain, would be so proud of Christians like Earl.

Madder and madder. Threats and insults.

I guess ol’ Earl didn’t like being mocked and denied his supposed right to comment on my blog.

How odd. How perplexing. Why, why was Earl so angry?  Just because everybody else got to comment, but not him? Because I was being unfair? Because I treated him differently?

Why didn’t he just go to a different blog then?

Why didn’t he just keep his Christianity to himself?

I wonder why I was doing that.

Treating an outspoken in-your-face Christian like Earl differently, I mean.

It’s a curious thing how when it’s your voice denied, when it’s you being mocked, when the shoe is on the other foot and the foot is on your throat, well, it is curious thing that it is only then the idea of discrimination makes you angry.

We're not discriminating against anyone, that's just our belief…
- Crystal O’Connor, owner Memories Pizza, Walkerton, IN
Explaining why her business refuses to cater gay weddings