That said, watch this clip from Media Matters:

Here’s Beck’s original 1 February, 2011 show: Part A, Part B, Part C. If you’ve got a strong enough stomach and if the batshit booger-eating crazy of Beck isn’t enough for you, read the comments on YouTube under the videos.

Say it really slow and ponderously, you know, like you’re insane. Also, wave your hands a lot.

As I’ve mentioned elsewhere, I know a little something about Iraq.  I didn’t have anything to do with planning the first war there, but I was involved in plans for the current one.  Let me draw you a map: 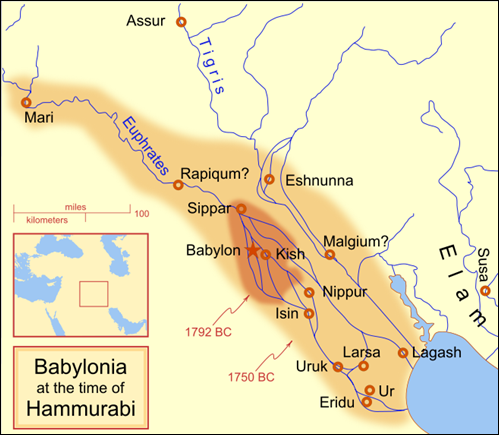 Ancient Babylon sits in the Euphrates River Valley, between the modern day ports of Umm Qasr (about were the ancient city of Ur is on the map) and Al Basrah (a little north of Lagash) and Baghdad (which is up near where Assur is on the above map).

Now, here’s a map of the invasion: 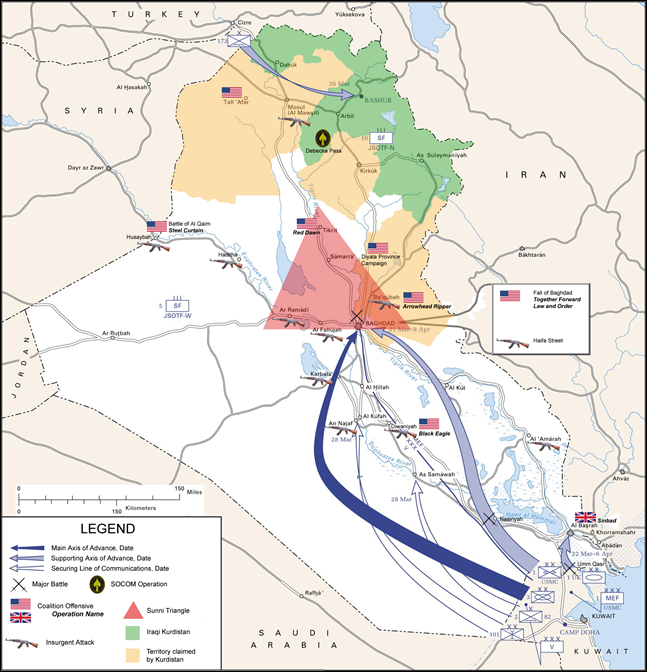 Note that we rolled right through the middle of the ancient city state of Babylon.

Right the fuck through the middle of it.

Bombing as we went.

Now, we didn’t actually bomb the actual ancient city ruins of actual old Babylon. For good reason, because there’s nothing there but some old bricks, a museum, and an archeological dig.  It’s a big, desolate hole in the ground.

Not to mention that we had orders not to destroy any more than we had to.

Not to also mention that we were supposed to preserve Iraq’s national treasures for the Iraqi people.

And just to mention one more time that there wasn’t anything there of military value worth bombing.

We were only marginally successful.  Ultimately battles were fought all through this area and a lot of ancient ruins got chewed up.  Then, well then we built Camp Alpha on top of the old Babylonian ruins. We bulldozed helicopter landing pads, and parking lots for our Armor and dug latrines.  Our tanks crushed ancient paving stones into dust and the rumble of those 60 ton machines caused the ancient Ishtar Gate to collapse.  We were condemned by the British Museum and historians around the the world, including and especially American historians, for destroying priceless and irreplaceable relics of ancient Babylon.

But Glenn Beck has been on Fox all week telling people this idiotic nonsense.  We didn’t bomb Ancient Babylon because of some secret Bible prophecy that we’re trying to bring about. According to Glenn, Satan, the Communists of the old USSR, the Socialists, Nazis, the Muslim Brotherhood, American Progressives (members of the Republican Party I’d just like to point out) and Barack Obama are all scheming together to bring about the Shiite dream of a reborn Islamic Caliphate which is also the New World Order run by the Illuminati and the Masons and George Soros.  Everybody, and I mean every damned body, is out to get us - and by us, Glenn means the five people he considers actual real Americans.  If he could work in Napoleon, a couple dozen Flying Saucers, the National Inquirer’s Pig Boy he’d have a SyFy movie of the week.

But there are. There are whole forums of these brain damaged spasm monkeys who believe him.

As Eugene Robinson said on Hardball, if you were saying this crap anywhere but Fox or in church the guys with the butterfly nets would snatch your ass off the street and pump you full of happy juice before you started eating your own excrement.

Look, I’m not a clinical psychologist, but even I recognize gibbering paranoia when I see it.