Number one, I'm in love, and you're in love. We're all in love together.
-- Donald Trump, CPAC speech.

I call it love, Gracchus. The people are my children, I am their father. I shall hold them to my bosom and embrace them
-- Commodus, Gladiator, 2000

It’s like Burning Man for Republicans, only instead of inclusion, self-expression, and cheerful nudity, there was conservative rage, xenophobia, and howling conspiracy.

Also, Donald Trump fucked a flag live on stage like some strange textile variation of a Tijuana donkey show.

No word yet on if Trump made the flag sign a nondisclosure agreement or if his lawyer had to pay the flag $140,000 to keep quiet.

Trump spoke for more than two hours at CPAC.

I watched it live.

I tried to take notes.

Calling it a speech suggests there was structure and content and some sort of narrative theme.

There wasn’t any of that.

Instead it was a frenetic mash of unscripted, unhinged rambling lunacy, sometimes changing topics two or three times in the same sentence. Frankly, the aforementioned donkey hopped up on knockoff Mexican Viagra and cheap tequila probably would have had more coherency.

Eventually, I just gave up and poured a couple fingers of William Wolf into my dirty coffee mug and watched in increasing disbelief as Trump careening from a disjointed recap of his election to tariffs to something about when the wind stops blowing you’re out of “electric” then back to tariffs jumping to collusion with Russian witch hunts to Andy Jackson and Red Hats to Robert Mueller back to a comparison of inauguration crowd size to something about how R. Lee Ermey should have gotten the Academy Award for Full Metal Jacket but Hollywood is made up of liberals apparently to something about the color of his hair to “thirty-two big fat rallies” (don’t ask, heehaw heehaaaw!) to how he invented the 4th of July to … I don’t know, a partridge in a pear tree.

It’s taken me three days to work my way through the video and transcripts.

And the rest of that bottle.

Trump said a lot of things, most of which sounded like a plea for involuntary commitment to a mental health facility, but it was the expected plug for his wall that really caught my attention.

See, as justification for declaring a national emergency, something conservatives like those in attendance at CPAC would have called “Government Overreach” and “abuse of Executive Power” back when the black guy was in the office, Trump again invoked the plight of immigrant women:

"Mothers, who love their daughters, give them massive amounts of birth control pills because they know their daughters are going to be raped on the way up to our southern border."

No mention, naturally, of the hundreds of immigrant children who have been sexually assaulted while in Trump's own detention camps. 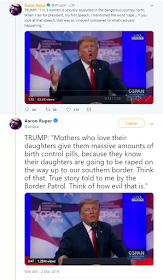 We must build a wall because immigrant woman are being raped on the way to America.

Women, from Central American countries, are being raped as they migrate north.

Thus, Trump’s reasoning goes, we should build a giant wall to keep them out.

Because if immigrant woman can’t get into America they won’t get raped because they’ll just stay in their own countries where there’s no rape or, you know, other forms of oppression and crime which is why they were seeking a better life in America in the first place or … something. Trump wasn’t exactly clear on the details.

If you build it, there will be less rape, I guess.

Maybe Costner will play Trump in the movie, he’s got the hair for it anyway. But I digress, again.

There’s a certain strange irony in that Trump is attempting to rally support for his wall from the xenophobic right-wing fanatics of CPAC who not only hate immigrants but illegal immigrants in particular by playing on their supposed sympathy for the plight of illegal immigrant women. Moreover, irony wise, these people – supposedly horrified at the idea of rape visited upon young women and female children – are the very same conservatives who unequivocally and loudly denounced a woman who claimed to have been sexually assaulted by their choice for Supreme Court Justice.

And here I am digressing for a third time in as many paragraphs.

Let's say this was true.

This bit, where Trump says,

One in three women is sexually assaulted in the dangerous journey north. When I ran for my first speech, mentioned the word “rape”... If you look at that speech, that was so innocent compared what's actually happening. Mothers who love their daughters give them massive amounts of birth control pills, because they know their daughters are going to be raped on the way up to our southern border. Think of that. True story told to me by the Border Patrol. Think of how evil that is.

Let’s say this was true. It's likely not, because that's not how birth control pills work, but let's say it was.

Trump says, "think of how evil that is."

Think on how evil that is.

Think on how evil it is that mothers must give their daughters "massive amounts of birth control pills" because they will be raped on the way to our border.

He’s not exactly clear, but for the sake of simplicity let's be charitable and assume it’s the rape part he has a problem with and not birth control pills per se or motherhood.

It’s so evil, in point of fact, that it’s still evil even when it happens to people we hate – like illegal immigrants.

THEN SHOULDN'T WE AS A MORAL NATION TAKE THESE PEOPLE IN WITHOUT DELAY AND PROTECT THEM?

Should we not immediately grant them sanctuary?

Is that not what a moral people would do?

I mean, what’s the point of even bringing it up, if we’re not going to do something about it?

If what Trump says is indeed true, why shouldn't we grant these victims immediate sanctuary?

If not, then why not?

Be specific and show your work.

You see the implications. Do you not?

You do all see what Trump is saying, right?

Trump’s statement at CPAC is directly counter to his stance on immigration itself.

Trump has said repeatedly that those crossing our Southern border are murderers, rapists, thieves, drug smugglers. Criminals of all stripes. That is why we must build this wall.

We have to build a wall to keep them out, to keep out crime and drugs and terror. Right? That’s what he tells us.

Yet, here he is literally telling you that many, perhaps even most, of those seeking refuge are not criminals at all but are in point of fact victims of horrible crimes.

Hell, we’ve gone to war in foreign lands for less.

If these were Christian women being raped by Muslim men in the Middle East, a task force of Navy ships and Marines would even now be sailing for that distant shore at flank speed in righteous moral fury.

Donald Trump laments this atrocity, but he isn’t talking about stopping it.

Instead, he tells the raging nationalists of CPAC that we must build a wall and keep these women on the far side it.

He demands sympathy for the plight of these victims solely in order justify victimizing them even more.

He’s not suggesting that we help these women in any fashion. Just the opposite in fact.

And yet, by Donald Trump’s own words, these are the very people we should be granting asylum to instead of turning away.

We Americans should be greeting these women, these victims, with open arms, with security and support and comfort.

For if America can’t protect the weak from the ruthless, then what goddamned good is it?