Any Tool Can Be Used As A Hammer…

That’s the basic law of tools. In an emergency, anything can be used to drive a nail

I’d say the same is true of killing a man, wouldn’t you?

Seriously, does the weapon matter? When you commit murder, I mean.

You want a guy dead. Why? Hell, I don’t know, you’re the crazy person out to commit murder, you tell me. Maybe he insulted your mother. Maybe he screwed your sister. Maybe he shot your dog. Maybe he doesn’t believe in Jesus, or hates America, or just doesn’t see things the way you do. Whatever, you hate the bastard and you want him dead.

He doesn’t see it coming, he doesn’t put up a defense, he’s minding his own business and Blam! there you are. Hit him over the head with a crowbar, run him down with your pickup truck, shoot him in the back, slip poison into his tea, vaporize him from orbit with a laser – as long as he ends up dead at your hands, it’s murder.

It’s premeditated. I mean you hate this guy, right? You wanted him dead. You planned his death. You told people you planned his death. There are hundreds of witnesses who watched you plan his death - hell, it’s a conspiracy, you asked them to help you, and a lot of them did. You choose your weapon and you pointed it and you pulled the trigger and he’s dead. That’s murder in the first degree.

You’re guilty as sin. Guilty in the first degree. You admit it, you admit it in public, on the radio and TV. You take responsibility for the death. You crow about it. You rejoice in it. You struck a man down in cold blood, and you’re Goddamned happy the dirty son of a bitch is dead. Even though you feel that you’re justified, you’re still a murderer.

Hell, it worked so well, that you want to do it again. You’re thinking about becoming a serial murderer.

Pastor Wiley Considers himself SAVED. He’s got Jesus as his very own lord and savior and he’s on the fast track to heaven. He’s a self righteous crusader against gays and lesbians, against abortion, against Muslims and Catholics and Jews and Atheists, and most especially against those who advocate the separation of church and state. Pastor Wiley hates those fuckers with the passionate self-righteous fire of man who believes his place in Heaven is assured.

Bear with me a minute.

See, Wiley believes in God with every fiber of his being.

There is no doubt in Pastor Wiley Drake’s mind. None at all. God is real, sitting up there in Heaven, wroth in His judgment, Jesus and His fiery sword beside Him. God is angry and He hates the sinners and He answers prayers. Oh yes, even the ones that call upon Him to kill.

See, Pastor Wiley believes in the power of imprecatory prayer. Imprecatory prayer simply put is this: the invocation of evil, i.e. a good old fashioned Old Testament curse. Here’s how it works, under special circumstance, Christians can pray to God and He’ll smite the shit out of some hapless asshole – then that poor bastard gets to go to Hell. Forever.

David did it as described in Psalm 35.

And Pastor Wiley did it.

See, as I mentioned, Wiley hates abortion. He hates it. And he hated abortion provider George Tiller. So Wiley prayed to God to have Doctor Tiller killed. He encouraged his flock to pray for Tiller’s death as well. And according to Pastor Wiley, that’s exactly what what happened, God killed the doctor dead.

"I am glad George Tiller is dead. [He was] a brutal, murdering monster and I am grateful to God [that the physician is no longer around]”

"There may be a lot who would say, 'Oh that is mean. You shouldn't be that way,' Well, no, it's an answer to prayer."

Drake said he prayed nearly ten years for the salvation of Tiller, medical director of the Women's Health Care Services clinic and an outspoken advocate for abortion rights. But about a year ago, Drake said, he switched to what he called imprecatory prayer:

Drake called Tiller "a reprobate" and a "brutal, arrogant murderer" who "bragged on his own website how many babies he had killed,” and likened him to Adolf Hitler:

"Would you have rejoiced when Adolf Hitler died during the war? Or would you have said, 'Oh that is terrible for him to be killed'? No, I would have said, 'Amen, praise the Lord, hallelujah, I'm glad he's dead.’ This man, George Tiller, was far greater in his atrocities than Adolf Hitler. So I am happy. I am glad that he is dead. Now I am sad that he went to hell, because he had a choice just like everybody else did. He could have chosen Jesus Christ and when he died went to heaven. But he chose the devil. He chose to neglect, he chose to reject Jesus Christ. And therefore on Sunday morning when he breathed his last breath there in the Lutheran church, he breathed his last breath, and he slipped into the presence of the devil. And I have a strange hunch and a strange feeling that there is a special, superheated, super-hot place in hell for people like George Tiller."

Even if the tool is God Himself?

What matters in a murder trial is intent. There’s a big difference between killing somebody with malice aforethought (First Degree Murder) and killing somebody by accident or negligence (manslaughter). In this case, Wiley believes that God killed Tiller because he, Wiley, asked God to do so through the use of imprecatory prayer. Wiley takes credit for this, publically. He basically brags that he hired a hit man (or hit deity if you prefer), had the doctor killed and delivered to unending torment (i.e. torture). He doesn’t deny it, he’s proud of it.

And he wants to do it again.

See, Wiley hates the President of the United States and he’s praying for God to smite Barack Obama down too. 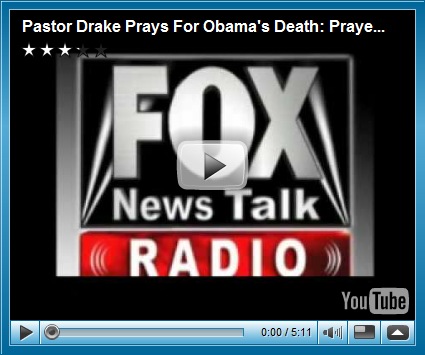 I say we take him up on it.

I say we take Pastor Wiley Drake at his word.

I say we prosecute this man for murder, for conspiracy to murder, for threatening the President, for solicitation to commit murder - and we put him in jail and let him rot there for the rest of his miserable, hateful life.

Wiley and his followers can hardly complain if we take them at their word, now can they?

Now, personally, I think the power of imprecatory prayer ranks right up there with gypsy curses and witchcraft. Personally, I think Wiley could fart into the wind and have a better chance of killing somebody than through the so-called power of prayer.

But it doesn’t matter what I think, I’m not trying to kill the President.

Pastor Wiley Drake believes that he has already killed a man, and that he can and will kill the President of the United States through the power of prayer. He believes. He believes. His flock believes. Others believe.

His intent is real.

Yes, I should not be typing. Yes, I made the stitches bleed again. Yes, it’s stupid. But Wiley Drake and his flaming Baptist hypocrisy has done pissed me well and truly off, and I could not not write about it.

Email ThisBlogThis!Share to TwitterShare to FacebookShare to Pinterest
Labels: things about politics, things about religion